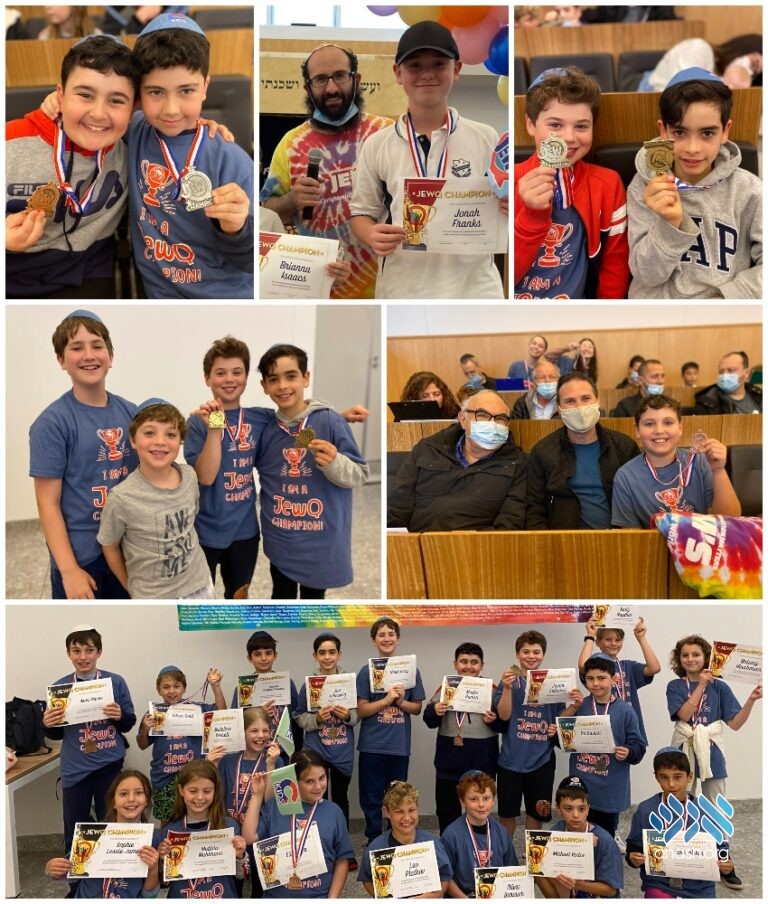 Jewish Kids across Australia are now more knowledgeable and proud Jews thanks to another successful season of JewQ.

Jarrah is a 9-year-old Hebrew School student from Australia whose life has been tremendously impacted by JewQ. “Jarrah knew almost nothing about Judaism when he started, and then he was awarded a gold medal,“ says Rachel Pixie, his mom, who is a member of Chabad of North Queensland.

At the grand JewQ finale held in Australia last month, gold medals were awarded to every child who earned an average of over 95% on all three JewQ tests, and Jarrah was one of them. Continues his mom: “We’re not religious at all, but I’m proud of Jarrah’s commitment to learn about his heritage.”

For the past year, children from across Australia have studied Jewish knowledge in their free time. They took tests, mastered Jewish knowledge, and became experts in holidays, mitzvot, Jewish history, and more.

This year’s Australian JewQ champions were some of 2,000 kids in 165 bases worldwide who studied about their Jewish heritage for over 14,000 hours. “The most powerful force in the world is the Jewish children,” says Rabbi Zalman Loewenthal, Ckids director. “Ckids is dedicated to celebrating that power.”

“It was an auspicious moment for Australian Jewry as kids united together across the land,” says Rabbi Zalman Koval, who helped produce the JewQ Australia program.

At the Championship event, which took place last month, kids showcased their vast knowledge by answering Torah questions. A lightning round tested their ability to remember all the collective knowledge from the Living Jewish textbook, which is the basis for JewQ learning.

The JewQ award ceremony recognized and congratulated every JewQ champion for their incredible achievement in Torah learning. Based on their final test scores, champions were awarded medals of either bronze, silver, or gold, and then special recognition was given to one child from each grade who received the highest mark of the year.

The highlight of the grand finale was when the ultimate JewQ Champion was announced. Lia Levinzon, the child who earned the highest score in the entire Australia, was awarded the JewQ trophy. Along with that, Lia also earned a grand cash prize of one thousand and eighteen dollars. “The children this year worked harder than ever—and their test scores proved it,” says Rabbi Mendel Raskin, managing director of JewQ.

The real secret to JewQ’s success, though? The unity of shluchim from all over. “Everyone pitched in wherever they were most skilled,” says Mrs. Leah Greenbaum. Although they received a constant stream of help from CKids headquarters, Australia’s shluchim took the lead to execute the JewQ resources. “We supported each other and took responsibility to make it happen.”

Throughout the turbulence of the last few years, JewQ has remained an oasis of Torah learning. “CKids is on the forefront of spreading Torah throughout the globe—literally,” says Rabbi Moshe Kotlarsky, vice chairman of Merkos L’inyonei Chinuch. “Australia is just one of the continents where JewQ is currently expanding.”

Visit Ckids.net.au/live to watch a replay of the JewQ finale, a celebration of Torah and Jewish children.

Thank you to JewQ Australia’s talented team of Shluchim who made the program such a success: