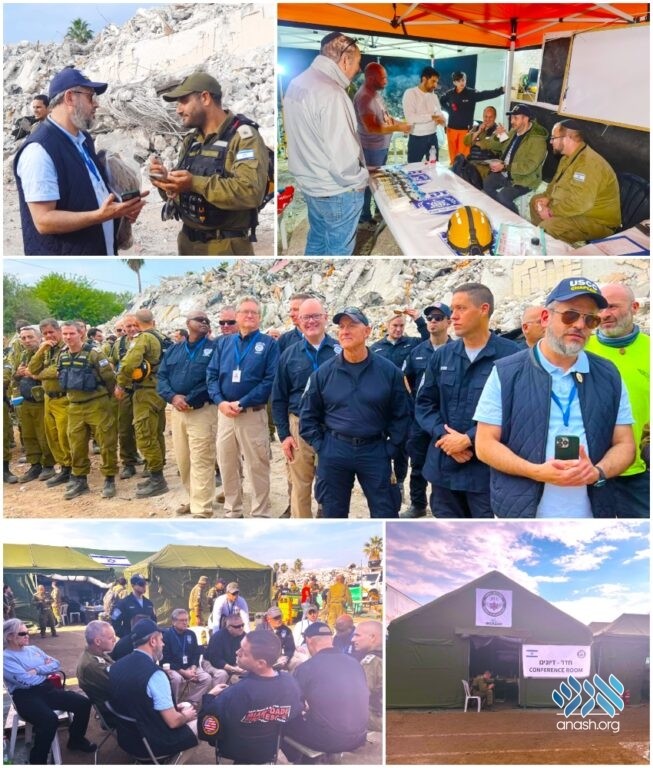 Chaplain Mendy Coën, of the United States Chaplain Corps, took part in a rescue drill operation in northern Israel with delegations from FEMA and the Florida Task Force simulating the devastation of the condo collapse in Surfside, Florida.

Chaplain Mendy Coën, Director-General of the United States Chaplain Corps (USCC), took part in a rescue drill operation in collaboration with the National Rescue Unit of the Israel Defense Forces (IDF) in Acre in northern Israel.

The drill simulated the devastation of the June 2021 condo collapse in Surfside, Florida, where 99 people lost their lives. Coën said the Surfside incident “helped change the rescue culture in America.” During the Surfside disaster, the U.S. government requested assistance from the State of Israel to help manage the search and rescue operation that lasted 14 days; the efforts were led by Colonel Golan Vach, Commander of the IDF National Rescue Unit.

Coën gave a briefing to the USCC chaplains at 3:00 a.m. local time from Acre (Akko), Israel, where the simulation was being enacted by the IDF. Also joining in the exercise, which was led by Colonel Golan Vach and scores of Israeli military personnel, were delegations from a number of U.S. agencies including the Federal Emergency Management Agency (FEMA) and the Florida Task Force. Other International governments were represented as well including delegations from Panama, Germany, Mexico and Brazil.

The drill operation cost over $10 million dollars and took place on two sites, one in Akko and another near Jerusalem. Over 600 IDF soldiers participated for 120 hours, traveling between the sites and training on protocols for locating missing people trapped under rubble and learning how to extract them to safety.

Coën described the scene and compared it to his time as a chaplain first responder in the aftermath of the Surfside, Florida disaster. He said that the drill was surreal, noting that the IDF had even recreated the smell of the collapsed buildings and utilized roleplaying actors representing family members trying to locate their loved ones. The operation also deployed spiritual protocols necessary in the aftermath of such a tragedy, so that scenes are treated with the utmost care and dignity. Zaka, Israel’s volunteer search and rescue team,  are trained to refrain from using any tools to dig for the missing but rather use their hands instead to avoid damaging any remains found.

In a very exciting development, Coën announced that the USCC would be assembling two 15-person teams of the USCC First Responders Chaplain Unit to fly to Israel to train with IDF National Rescue Unit recognized internationally as the best in the world. “Israel has perfected the science of search and rescue operations to include population intelligence, structural engineering, GPS and electromagnetic mapping with a level of speed in proactive response that is not seen elsewhere,” said Coën.

The USCC trains and certifies chaplains to serve in community missions around the United States. Chaplains are trained to defuse pain and ease tension by means of language, psychology, and emotional support. “I wish we were out of business. I wish there was no need for chaplains. We were busy in 2022, and God knows what will happen in 2023. We must be ready to be deployed when disaster strikes,” continued Coën.

In an inspiring address, Chaplain Coën reiterated his support for the 600 USCC chaplains. “I have 100% faith in our chaplains. One more action and one more act of kindness is what is requested of us. One more phone call to someone in pain, one more good deed, and we balance the world into positivity,” concluded Coën.