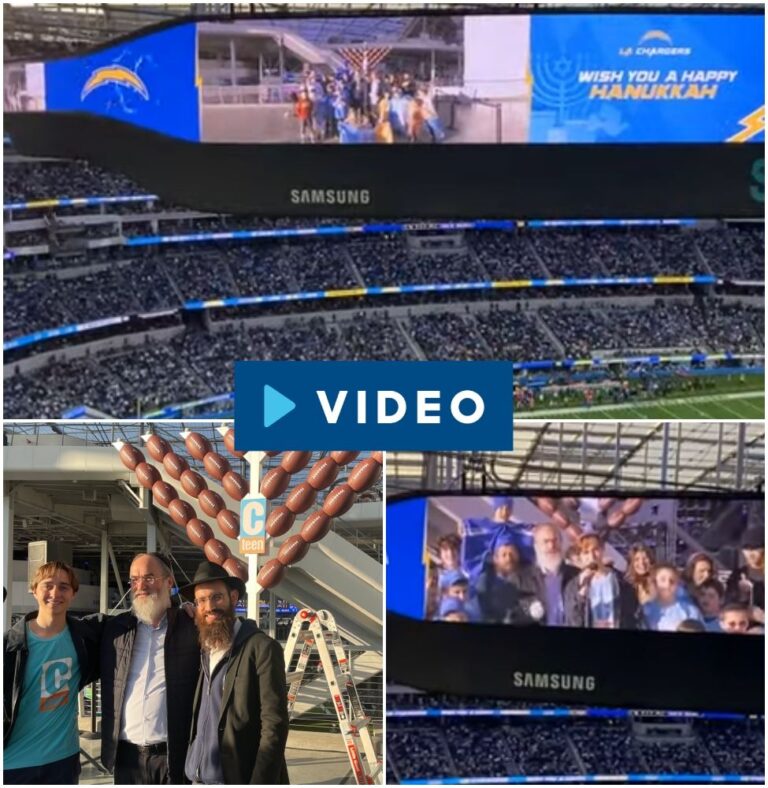 Cteen and Chabad of Redondo Beach facilitated the first menorah lighting during an NFL game as opposed to before or after as was done in the past. Cteen member, Rafael Gabai lit the menorah.

On Sunday, December 18th, nearly 70k thousand fans attending the Chargers-Titans game took part in the first-ever Menorah Lighting held at Sofi Stadium. Hosted by CTeen International and Chabad of Redondo Beach, it was a powerful demonstration of Pirsumei Nissa and Jewish pride.

Projected on the jumbotrons between the third and fourth quarters, Rabbi Yossi Mintz of Chabad of Redondo Beach addressed the crowd with a Chanukah message and wished everyone a happy Chanukah.

In addition to being the first Menorah kindled at Sofi Stadium it was also the first time a Menorah was lit in the middle of an NFL game, as opposed to before or after, as was famously done in the past.

Rafael Gabai from CTeen Conejo Valley lit the football-decorated Menorah. “I felt a rush of excitement leading up to the lighting and was honored to be representing the Jewish community in front of tens of thousands of people,” said Gabai. “I think the lighting of the Menorah at the stadium was important both to remind other Jews in the stadium that it is Chanukah and they have the opportunity to do a mitzvah and to show that you can be a proud Jew and practice publicly without being afraid of discrimination,” he added.

The atmosphere was electric during the Menorah lighting ceremony and the crowd cheered and applauded. “It was truly moving for all the parents and teens who joined,” said Rabbi Mendy Friedman, Rafael’s Rabbi at CTeen Conejo. “You walk in and it could be overwhelming to see so many people in the stands, but as the whole stadium joins in our Menorah Lighting, it just fills you with an immense sense of Jewish pride.”

“Lighting the Menorah in such a public setting truly epitomizes the Rebbe’s vision to utilize every opportunity to bring light to the world, especially on Chanukah,” said Rabbi Moshe Kotlarsky, Chairman of CTeen International and Vice-Chairman of Merkos L’inyonei Chinuch. “Seeing the impact it has on our youth is incredible.”