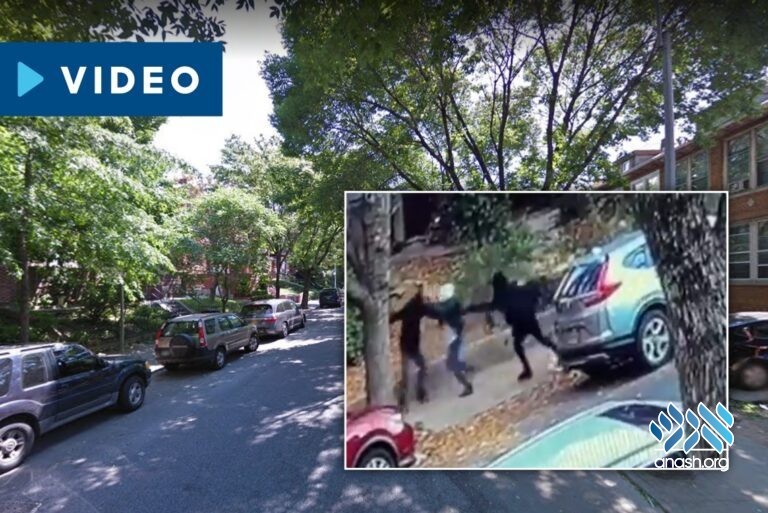 A young Jewish man was held up at gunpoint early Tuesday morning in the heart of Crown Heights. The victim fought back and scared off his three attackers who immediately fled in their vehicle.

A young Jewish man was the victim of an attempted robbery early Tuesday morning in the heart of Crown Heights.

The victim was walking on Montgomery Street between Kingston and Albany around 7:30 Tuesday morning, when a black Honda double parks on the north side of the street, and three young males exit the vehicle.

Surveillance footage obtained by Anash.org, shows the three males approaching a Jewish man wearing a white hoodie and backpack, when one of the muggers tapped the victim on the shoulder and displayed a gun.

The young man instinctively began fighting back, scaring off his three attackers who immediately fled with their vehicle. According to the victim, no words were exchanged with his assailant.

The victim was thankfully not injured in the incident.

Crown Heights Shomrim and the NYPD arrived at the scene shortly thereafter and are now searching for the suspects.

According to the NYPD, the vehicle’s license plate does not match the car that was used in the incident, thus complicating search efforts.

Shomrim are currently searching the streets for additional security-camera footage to be able to assist the NYPD with their investigation. If you have any information which can assist the investigation, please call 911 and the Crown Heights Shomrim 24 hour emergency hotline at 718-774-3333.