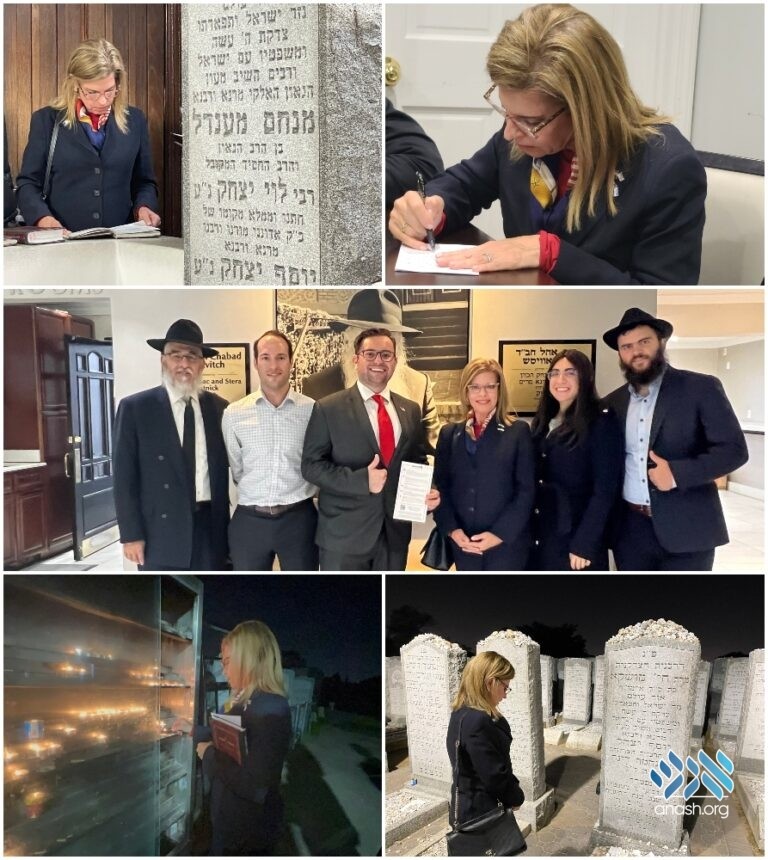 Leora Levy, the Republican nominee in the 2022 United States Senate election in Connecticut, visited the Rebbe’s Ohel on Thursday night, and praised the Rebbe’s drive for education.

Leora Levy, the Republican nominee in the 2022 United States Senate election in Connecticut, visited the Rebbe’s Ohel on Thursday night.

Cuban-born Levy, who is Jewish, and calls herself a “proud American Jew”,  is the sister of Shlucha Mrs. Sara Weinstein of Chabad on Campus in Pittsburgh, PA. She is running against Democratic incumbent Richard Blumenthal in the November 8th election.

She was accompanied on her visit to the Ohel by her nephew Aryeh Leib Weinstein of Pittsburgh, PA, her niece and nephew Nitsan and Shira Hezrony, Rabbi Eliezer Gold of Crown Heights and Ryan Mermer, the Republican National Committee’s Director of Jewish Outreach.

Following her visit to the Ohel, she released a statement praising the Rebbe’s push for moral education.

“Tonight I was at the Ohel and we just heard the Rebbe speak about the fact that the constitution of the United States was written for the people and the people are not subservient to the constitution. The Rebbe also stressed the importance of a moral education in our society. That’s what I want for our children! Our country is losing its way. I’m asking for your vote so that I can make sure our children have a moral education, so that our values are transmitted to them and that they can have the opportunity to live an American dream as we have had,” she said.

Levy says that she prides herself on her family, which has been involved in supporting Israel and other Jewish causes and philanthropy for three generations. “We share the Torah  values of the Jewish Community such as Tzedaka, the sanctity of life, education, freedom, family values and parental rights and good education, not indoctrination of our children, the importance of Israel, and more.”

She says she is running for U.S. Senator from Connecticut to “make life affordable again, to make life safe again and to protect the freedom of the residents of CT and of Americans nationwide that is being threatened on a daily basis.”