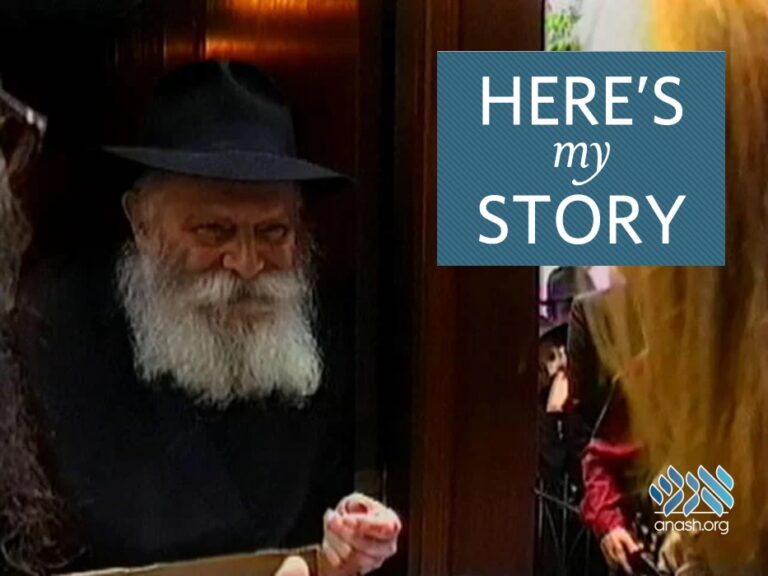 Mrs. Sylvia Goldhirsch of Melbourne tells of when the Rebbe sent her his personal Lulav and Esrog after a health scare, and the advice the Rebbe gave her on buying a house.

Mrs. Sylvia (Shprintza Gittel) Goldhirsch is a member of the Chabad community in Melbourne, Australia. She was interviewed in the My Encounter studio in Brooklyn in November of 2019.

I was born and raised in Australia in a traditional, warm and loving Jewish home, but I was not introduced to Chabad until I met my future husband, Michel Meir, whose family was connected to Rabbi Yitzchok Dovid and Rebbetzin Devorah Groner, Chabad emissaries in Melbourne.

After we got married, we also became close with the Groners and, at one point, Rabbi Groner offered me a teaching position at the Beth Rivkah high school for girls and Yeshivah College for boys, where I taught off and on until my family grew and I was needed at home.

We first met the Rebbe in 1985, when we came to New York for a fundraising dinner on behalf of Colel Chabad. We were introduced to him as he was leaving his office. I don’t even remember what he said to us because I was so overwhelmed by his presence. As soon as he looked at me with his piercing blue eyes, I knew that he could see exactly who I was and what potential I had in me. It was a very moving moment in my life.

Three years later, we met the Rebbe again, and this is where my story really begins.

By way of background, I must explain that there is a history of breast cancer in my family, on my mother’s side. My mother herself was diagnosed with it and passed away six years later, at forty-nine years of age. Then another relative was diagnosed with it when she was in her early 30s, although after treatment she recovered. And then I myself found a lump. This was in 1988.

I had the required x-rays, but it was not clear if it was malignant or benign. I saw four different surgeons and each admitted that the evidence on the x-rays wasn’t clear, but nonetheless they all advised that — to be safe due to the family history — I have a double mastectomy.

As soon as I found the lump, my husband called the Rebbe’s office and asked for a blessing that everything would turn out all right. But after I had seen the four surgeons — which was a fairly soul-destroying experience — my husband suggested that we travel to New York and see the Rebbe in person. So we went during the intermediate days of Sukkot.

Shortly after we arrived, we went to see Rabbi Yehuda Krinsky, the Rebbe’s secretary, and he told us that the following day he would send over two yeshivah students with the Rebbe’s lulav and etrog for me to make the customary blessing. The Rebbe had said that this mitzvah would help bring about a speedy recovery for me.

When the yeshivah students came with the Rebbe’s lulav and etrog, I got so nervous that, for a moment, I forgot the correct blessing, but when I did make it, I felt that something very powerful was happening to me.

Later, we stood in line to receive lekach, the holiday honey cake, from the Rebbe, and I have a beautiful photograph of that moment. I have the biggest smile on my face as the Rebbe is handing me the cake, while my children are standing around me, looking on.

When we returned to Melbourne, I went back to my general practitioner, who was a wonderful doctor and also a family friend, and he said, “I thought of one more surgeon that perhaps you should go see.” I did as he recommended, and this surgeon looked at the x-rays and said, “It’s really hard to tell from this, so let’s do a biopsy of that lump. And then we can decide how to proceed.”

That was more than thirty years ago, and I have enjoyed the best of health ever since.

Up until now, I haven’t spoken publicly about this, as it is a personal matter and it is difficult to talk about something so personal. But I understand the power of words to affect others. One never knows what other people are going through and how their life or faith in G-d may be changed by hearing this story of the Rebbe’s blessing.

We visited New York often, standing in line as the Rebbe was handing out dollars for charity, in an effort to connect with him and continue to receive his blessings. On one of those occasions, we were there as a family and, after we passed by, the Rebbe called me back to hand me another dollar, saying, “This is for you, as you are the akeret habayit [the mainstay of the home].”

I was stunned by his words. “What does that mean for me — to be the mainstay of the home?” I thought. “What change must I bring about in myself to live up to the importance of this title?” And I came to understand that I must be a role model for our family and for the community.

This realization played itself out in many ways in my life, but it primarily led to our opening our home to others.

At some point we decided to build a house in St. Kilda East, close to Yeshivah College. We thought this house was the home that we would live in, and we were very happy with what we had built. A short while later, another property — a big old house on a sizable plot of land on the main road — went up for sale. One Sunday afternoon, we went to look at it, just out of curiosity. And, coincidentally, on that very day, this property was being auctioned off.

My husband surprised me by bidding on it and buying it. “What are we going to do with two houses?” I asked, and he answered that he wanted to demolish this big old house and turn it into a community wedding venue. But I felt that the property had such character — the building was overlaid with bricks of sandstone which closely resembled Jerusalem stone — that it would be wrong to destroy it. In the end, my husband decided to call the Rebbe’s office to ask for advice. The answer came back in the form of a question, “Is the new property closer to the synagogue?”

The large property was closer, so the Rebbe gave us his blessing to move in. We sold the house that we had been living in, and the big house that we just had purchased has been our home now for more than thirty years. It has been a home blessed with joy — we have held weddings here, circumcision feasts and communal events. It is a community hall really, but we live in it, and we feel blessed to have had the privilege of hosting so many people and events, all of which we have tremendously enjoyed.

In conclusion, I would just like to say that I am grateful every day for the life I have been given, for the way my children have grown up to be proud Lubavitchers, for the work my husband has done in the Chabad community, and, most importantly, I am grateful for the Rebbe’s blessings and for having had him in our lives to give us direction and set the course for future generations of our family.