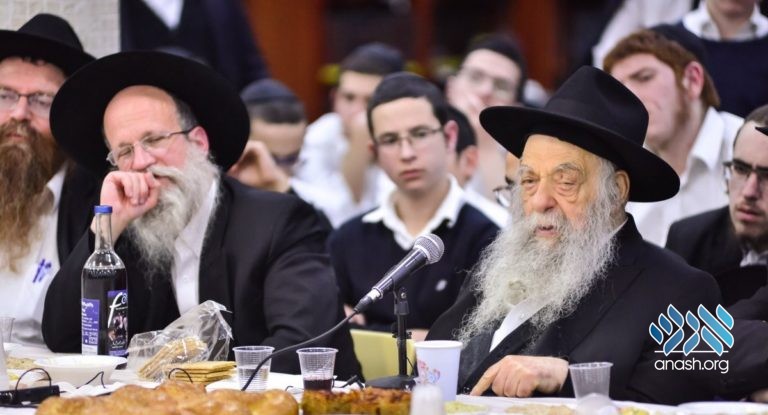 Following the recent discussions on “Headlines” about the derech of Lubavitch, one bochur reminds us of where our emphasis has always been.

In the past few weeks, there has been much discussion about the “derech” of Lubavitch, the Rebbe’s Hashkafa etc, especially in contrast to other factions in the Frum world. While the discussion may have brought out some negative thoughts, feelings, and opinions by some, at the same time, it gave others the opportunity to clarify and explain the Rebbe’s unique approach.

I would like to point out something which I feel was overlooked.

Walking away from the last podcast, the maskana that many came away with was that Chabad emphasizes Ahavas Yisrael over Torah, and the Litvishe oilom emphasize Torah over Ahavas Yisrael.

In my opinion, this does not do justice to either shita. Are we to say that all Litvishe doing Chesed full time are looked down upon by the Litvishe world? And are we really suggesting that in Chabad all that is taught in our Yeshivos and schools are the basics of Yiddishkeit which they right away go out and spread to the world? Unfortunately, this is the sentiment that many feel about Lubavitch (and even among our own kehila, there are those who sometimes mistakenly feel this way too).

Chassidus Chabad is not just an outreach program. Rather what Chabad is all about, as repeatedly emphasized by the Rebbe, is making a Dirah B’tachtonim for the Eibishter. This was what Chassidus was about from the days of the Ba’al Shem Tov and the Alter Rebbe, and this is what it continues to be today too. The Rebbe never changed the mission statement ch”v, but rather took this concept even further and deeper.

What does making a Dirah B’tachtonim really mean? As explained in Tanya (see perokim 33, 36) – it means even in this world the ultimate truth that “Ein od Milvado” – there is no existence besides Hashem. We need to reveal this ultimate truth in every person, place, and thing in this world.

According to Chassidus, each and every aspect in our Avoidas Hashem is all for this purpose – revealing the truth of “Ein od Milvado” and thus making a Dirah B’tachtonim. For example, learning Torah: Torah is Hashem’s Chochmah, where the ultimate and true existence of Elekus is not concealed. Hashem gave us the gift of being able to study Torah, so that Hashem’s intellect can become accessible to the human brain, and thus the human brain can become unified and one with Elekus (see Tanya perek 23). Mitzvos – are meant to be done specifically with a physical object, using them to fulfill Hashem’s Ratzon, thus revealing the truth of Ein Od Milvado even in physical objects (see Tanya perek 37).

Anyone familiar with the teachings of Chassidus surely knows, that Yetzias Mitzraim, Matan torah, the Mishkan, the Nevieim, Malchus Beis Dovid, the Beis Hamikdash, Galus and all the Nisyonos and hardships that come along, Teshuva, Tzaddikim, and ultimately Geulah – Moshiach are all part of this one idea – revealing the truth of Ein od milvado thus creating a Dirah b’tachtonim for Hashem.

The Rebbe stressed, that as we get closer to Moshiach’s imminent arrival, the world (including the Jewish world) has been getting darker, becoming even more of a “Tachton”, and thus the ability and necessity to create the true “Dirah b’tachtonim” also gets stronger.

This is why the Baal Shem Tov came and brought Chassidus – Penimiyus Hatorah to the world.

Penimiyus Hatorah has always been an important part of Yiddishkeit, but for many Tekufos of jewish history, it was kept around only be Yechidei Segulah. The Baal Shem Tov took Chassidus and began spreading it to everyone, not just to a few Tzaddikim Nistarim in a cellar, but rather the Baal Shem Tov introduced Chassidus to the masses.

Chassidus added a Chayus in torah, gave us a new appreciation of the preciousness of the Yiddishe neshama, stressed the importance of davening and having a positive relationship with Hashem, and the Koach of Teshuva, all essential tools needed to really make the Dirah Betachtoinim, that is so required for us to make especially in these last generations of Golus.

Then came Chassidus Chabad, two generations later the Alter Rebbe explained that this idea of Chassidus is not meant just to make an atmospheric change, but rather it is meant to change ever Yid in pninyusdike way, by delving deeper into pnimiyus HaTorah and educating ourselves to be entirely made-over by chassidus. Our human brain needs to immerse in Elukos, thus creating a true and inner change in who we are, to the degree that ein oid milvadoi becomes a reality understood to us the way we understand any other basic concept the human brain can fathom.

From the days of the Alter Rebbe, the mission was to spread Chassidus, and main focus was to make Chassidus a way of life for those ready to become Chassidim and serve hashem as best as possible.

As time went one and we came closer to Geulah, especially after the holocaust in the modern world we found ourselves, and the choshech became even greater, a new “tachton” become to be. Now the focus shifted to a new frontier – the streets, the unknowing lost Jewish souls that need to be given yiddishkeit. At this final stage, Dirah B’tachtonim takes the form of Tachtonim Mamash – “Tachton, she’ein Tachton l’matah heimenu” (so low, that there is nothing lower), this is where our Avoda is needed today.

Not that now chas vesholom our job is not to be immersed in torah and chasidus the way the Alter Rebbe demanded us. Not that now, making a Dirah Betachtonim doesn’t happen by changing our brain’s perspective and making Ein Od Milvadoi a reality for ourselves. Rather now we are required to do just that, and take it even further – bring this truth to even a greater Tachton too.

Dirah B’tachtonim demands that a Chossid works on him/herself to transform themselves entirely, a bochur following the Rebbe’s Chinuch must learns every free moment that he has, must be Baki many mesctos in shas, be able to quote Shaagas Aryeh, be well versed and have a good understanding in the Rebbe Rashab’s deep mamorim, and be boky in all the unbelievable chidushim of the Rebbe’s torah. A Lubavitcher chossid doesn’t need to learn only so that he will no basic Halachos when going on shlichus and have a nice dvar torah to give over, rather he needs to be emmersed in nigleh and chassidus, to create the Dirah B’tachtonim in his own human brain – just like the Alter Rebbe required us to do.

A Bochur goes on Mivtzoim on Friday and a yungerman travels on Shlichus not because he came to the Maskana that Ahavas Yisrael overrules torah, rather because his mission is to take the torah and chassidus he learnt to deeper level, bring and bring it to even a greater “tachton”!

Maybe not all of us live up to this high ideal, and their mivtziom work isn’t quite and extention of them being immersed in chasidus and making their own Dirah Betachtonim. But it is up to us to live up to what it means to be Lubavitcher Chassidim – The Rebbe’s Chassidim, and let’s not take our failures and build our Derech around it, rather let us see what our derech is, and work our way towards it. We are 25 years after Gimmel Tammuz, but that doesn’t change the fact that the Rebbe as our Nossi gives us the Koach to live up to our position as the Rebbe’s Chassidim.