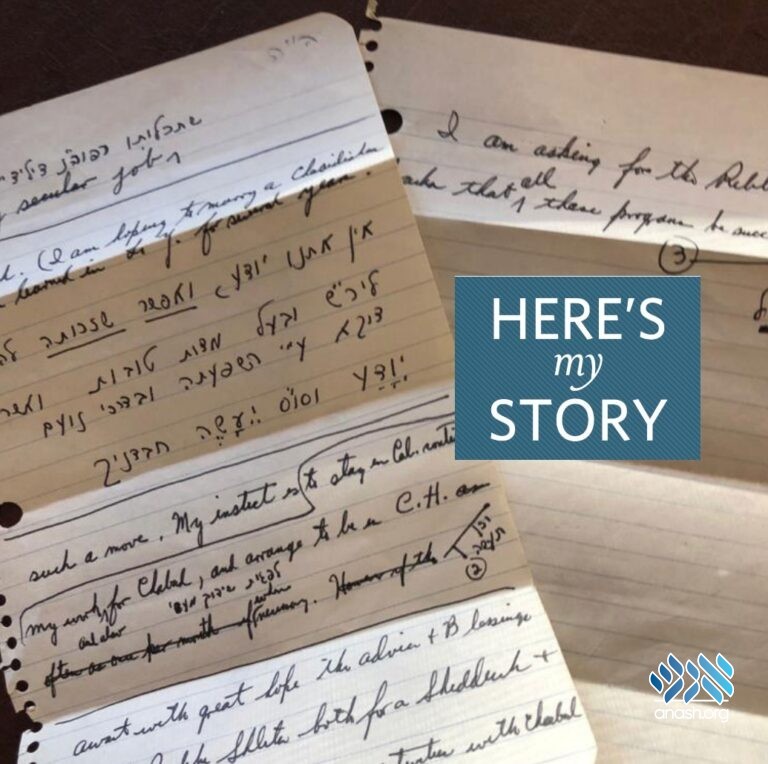 When family therapist Marcia Greensite wrote to the Rebbe describing her work as a ‘secular job’, the Rebbe crossed it out and wrote that the emotional wellbeing of children is a divine mission.

Marcia Greensite is the executive director of a behavior therapy agency that serves over 100 children with special needs and is a family therapist specializing in treating teenagers. She was interviewed in Los Angeles in 2011.

The first time I went to Crown Heights, in 1973, it was a disaster. I had grown up in San Diego, connecting with Chabad as a student at the University of California San Diego (UCSD), but going from the beaches of La Jolla to Brooklyn, New York, was just too much for me at the time.

So, I went back to UCSD, unsure about my Judaism and unsure about my own life. After about a year, I had a better sense of who I was and what I was looking for, so I decided to go back to New York. I’m going to go again, and give it another try, I thought to myself.

My parents were not supportive of the idea, to say the least. We belonged to a Conservative synagogue, but our interest and involvement fell away after the Bar and Bat Mitzvah years.

“You know what, Mom,” I suggested, “come along with me and see what it’s all about.”

My mother was from New York and always missed the city, but she was horrified at the idea. Still, I managed to convince her to come with me for the weekend of the “Encounter with Chabad,” when we would have an opportunity to meet the Rebbe.

My mother was very impressed with our hosts and felt very warm towards the other people we met over that Shabbat. But she wasn’t comfortable with the whole religious scene. When we had to wait for hours to meet the Rebbe, she was not happy. But she was a real trouper and she joined me.

We were told to prepare a little note with our names so we could hand it to the Rebbe. My mother’s name is Carol, but her Hebrew name is Chaya. She was always very proud of it — it means “life.”

Eventually, we were allowed into the Rebbe’s office and my mother handed her note to him. He read through it, and then looked up at her. “You have another name, don’t you?”

What? Now I was looking at her.

“My full name is Chaya Yenta,” she explained, “but I hate the name Yenta, so I never tell anybody about it.” We were astounded. She had never written to the Rebbe before, and didn’t know anyone in the community, so it was quite mind-boggling.

I had brought my mother along as my sidekick, but she ended up getting most of the attention. The Rebbe spoke to her, and she talked about my father and my brothers. Eventually, the conversation came around to me.

In my note, I asked for a blessing that my stay in Crown Heights be successful this time. The Rebbe asked what I had been doing until now.

“What were you majoring in?” he inquired.

“Philosophy, but I think my real interest would be psychology.”

The Rebbe looked at me and said, “You should think about going back to college.”

For an entire year, people had been telling me that I should quit college, since it wasn’t the right place for a religious Jewish girl: You don’t need to be in college, it is nothing like the real world anyway, they would say. And here was the Rebbe, telling me to think about going back to college. All I could do was look back at him with complete disbelief.

My mother, a typical Jewish mother, interjected, “Well, what about getting married?”

Embarrassed, I gave her a look: Maaa!

“Don’t worry,” the Rebbe assured her. “That will come too.”

Coming out of the meeting, while I was still stunned by what the Rebbe had said, my mother chirped, “You know, the Rebbe really liked me.” She talked about that visit to the Rebbe until her last days.

The next day at my desk, where I was supposed to be working as a secretary, was a catalogue for classes at the University of California Los Angeles (UCLA). It belonged to one of the other girls in the office, but it had always been my dream to study in UCLA’s psychology department, so I started leafing through and saw some interesting courses.

Then, I sent a note to the Rebbe asking whether I should leave Crown Heights, transfer to LA, and major in psychology,

The Rebbe gave his blessing, which is how I ended up studying psychology at UCLA, and eventually earning my master’s as well.

The marriage part came years later, but thank G-d it did come.

After finishing my undergraduate degree, I had a great job as a research assistant studying autism at the UCLA neuropsychiatric institute, and I was very involved in the local Chabad House run by Rabbi Shlomo Cunin. That was really my main passion in life. I had an apartment where I hosted any girl on campus interested in coming to Chabad for Shabbat. I felt that was what I was meant to do.

I was also dating, and making frequent trips to New York to do so, but by this time I was in my late twenties, and nothing was working out. I started to get depressed: Girls I had brought close to Judaism were already married with children. What exactly was happening with me?

It was time to really get it all out in a letter to the Rebbe.

I needed his advice.

I began by writing who I was, how old I was and what I was doing. “My secular job,” I wrote the Rebbe, was at UCLA, and then I went on to say that I considered my activities at the Chabad House to be my “real work.” Since I was a Lubavitcher by then myself, I requested a blessing to find a nice Lubavitcher boy to marry, and asked whether I should move to New York or stay in Los Angeles.

Where I had written “my secular job,” the Rebbe crossed out “secular,” and added in the margin, “— the purpose of which is the emotional wellbeing and healing of children.” Clearly, he saw it as more than a mundane occupation, but as a divine mission. In time, working with children became my life’s work, so this message from the Rebbe means a lot to me.

Responding to my statement that I was looking for a nice Lubavitcher boy, he wrote: “No one can foretell a person’s destiny. Perhaps it will be your privilege to marry a G -d-fearing person of fine character [who is not a Lubavitcher, but] who — specifically through your influence — will learn of [the beauty of the chasidic way of life] and become a Chabad chasid.”

Finally, the Rebbe told me to stay in Los Angeles. There was no need for me to move in order to get married.

A few months later, a matchmaker put me and my husband together. His father was a Bobover chasid, his mother from Satmar, and he was living in Los Angeles. On our second date, we could see that we liked one another, but he was curious about something. “How can you be dating me seriously if I’m not a Lubavitcher?”

“Funny you should mention that,” I replied, and I told him what the Rebbe had said about looking outside of Lubavitch for someone who is “G-d-fearing and of fine character.”

He turned white. “I have to tell you something, too…”

“When Reb Moshe Feinstein signed my certificate of rabbinic ordination, he added a few extra words at the end: ‘I would like to mention, for this person in particular, that he is of fine character and is G-d-fearing.’” So we knew it was destined to be.