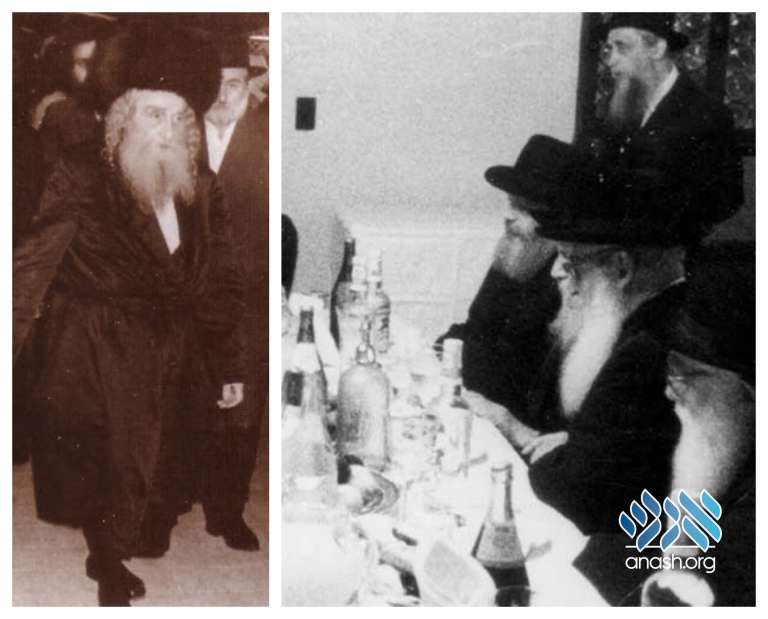 Toward the end of the 1960s, while studying in Chabad’s Yeshivat Torat Emet in Jerusalem, I heard about a charter flight being arranged to visit the Lubavitcher Rebbe for the High Holidays. Feeling more than excited to spend this special holy time in the presence of the Rebbe, I eagerly signed up.

Before leaving for New York, I went to visit the Gerrer Rebbe to inform him of my upcoming trip. Although I am and always was a Chabad chasid, I had developed a close relationship with the Gerrer Rebbe, Rabbi Yisrael Alter, a charismatic leader who attracted yeshivah students from different streams of Judaism. Upon hearing my final destination, he asked me to do him a personal favor: “Please give regards in my name to the Lubavitcher Rebbe, and my wishes that he be inscribed for a good year.”

When I arrived in New York, I had a chance to meet the Rebbe in a private audience. At the end of the meeting, after we finished discussing my personal issues, I conveyed the Gerrer Rebbe’s regards. As soon as the Rebbe heard the words – “my wishes that he be inscribed for a good year” – he rose from his seat and answered, “Amen! May G-d grant that the blessings we all wish one another be fulfilled.”

I returned to Jerusalem after the conclusion of the month of Tishrei, and the very next day received a message that the Gerrer Rebbe was looking for me. I went to see him after Shabbat ended. When I entered, he was still sitting in his Shabbat attire, his face radiant; he greeted me warmly. After I informed him that I had carried out his instructions, he said, “Tell me something interesting that the Lubavitcher Rebbe taught you.”

“Do you mean something he said at the Chasidic gatherings?” I asked.

“No. Tell me something that he said during the High Holiday meals,” he specified. I could tell he was waiting to hear about something very specific. And, in truth, I was in no rush to describe it.

The Rebbe used to eat his meals together with some of the elder chasidim in the apartment of his father-in-law, the Previous Rebbe, who had passed away ten years prior. During the breaking-of-the-fast meal after Yom Kippur, I came to stand outside the door of the dining room to watch what transpired inside.

So this is what I described for the Gerrer Rebbe. I told him that the head of the table – the seat normally reserved for the Previous Rebbe – remained vacant. The elder son-in-law, Rabbi Shmaryahu Gurary, sat on one side, while the Rebbe sat on the other, as they did during the Previous Rebbe’s lifetime.

During the High Holidays, the Rebbe adopted the most solemn demeanor and even wept – especially when he blew the shofar. Now, at the conclusion of the holiday, however, he looked completely different, his face beaming with joy.

Present at the meal were several distinguished rabbis, some of whom had made the trip from Israel. The Rebbe turned to them and said, “Perhaps you can issue a rabbinic ruling that Mashiach should arrive immediately.”

In response, the most senior among them humbly replied, “Who are we? If the Rebbe agrees that Mashiach should arrive now, then that should be enough.” All of a sudden the Rebbe’s face looked crestfallen. He sighed, “You are waiting for my agreement…?”

Apparently one of the other rabbis must have kicked this rabbi under the table because he quickly backtracked: “No, no. We do agree. Mashiach should come now.” But clearly it was too late; the Rebbe did not seem to react.

As I was recounting this story I noticed that the Gerrer Rebbe, who had been listening intently so as not to miss a single word, had become quite agitated. I saw that his eyes were red, welling up with tears. I was truly shaken; I had never seen him this way.

I continued with my story. I told him that several days later, on the night of Sukkot, again I was present at a holiday meal with the Rebbe – this time in the sukkah. The rabbis from Israel were also there. They began discussing a Halachic question: Were Israeli yeshivah students – who normally observed only one day of Sukkot while in Israel – obligated to adopt the practice of the Diaspora to observe two days, when spending Sukkot in America?

Before they could finish presenting the question to the Rebbe, the Rebbe said quietly, “The second day of Yom Tov? Why, you could have completely avoided it!” As if to say that had they immediately issued the ruling after Yom Kippur that Mashiach must come now, then the second day of the holiday would have been annulled, since Mashiach would have come!

The rabbis responded by proclaiming that Mashiach should come immediately, but the Rebbe ignored them and moved on to another subject.
As I concluded this story, I saw that two tears had rolled down the Gerrer Rebbe’s cheeks. He said, “Nu, may it be for good.”

Then he raised his eyes to the ceiling and stayed that way engrossed in thought for a few minutes. I took this as my cue to leave the room.

Many years later, I met Rabbi Pinchas Menachem Alter, Rabbi Yisrael Alter’s brother. When I told him the story, he said, “Now I understand. I recently visited the Lubavitcher Rebbe and before I left, he told me that I should send regards to my brother whom he knows and my brother whom he doesn’t know. I assumed that the ‘brother he knows’ meant my brother Rabbi Simcha Bunim (who would later become the Gerrer Rebbe himself) whom he had met on many occasions, and ‘the brother he doesn’t know’ meant my other brother, Rabbi Yisrael.

“When I relayed the Rebbe’s regards to my brother Rabbi Yisrael, he exclaimed, ‘Is that what he said? The Lubavitcher Rebbe and I know each other very well!’ I was confused because, to my knowledge, the Rebbe and my brother had never met. But upon hearing this story it all made sense. If – when you recounted the story – my brother shed tears, then he and the Lubavitcher Rebbe truly do know and understand each other.”

Rabbi Yosef Segal heads the Colel Tzemach Tzedek in Jerusalem, where he lives with his wife and children. He was interviewed in his home in July of 2014.