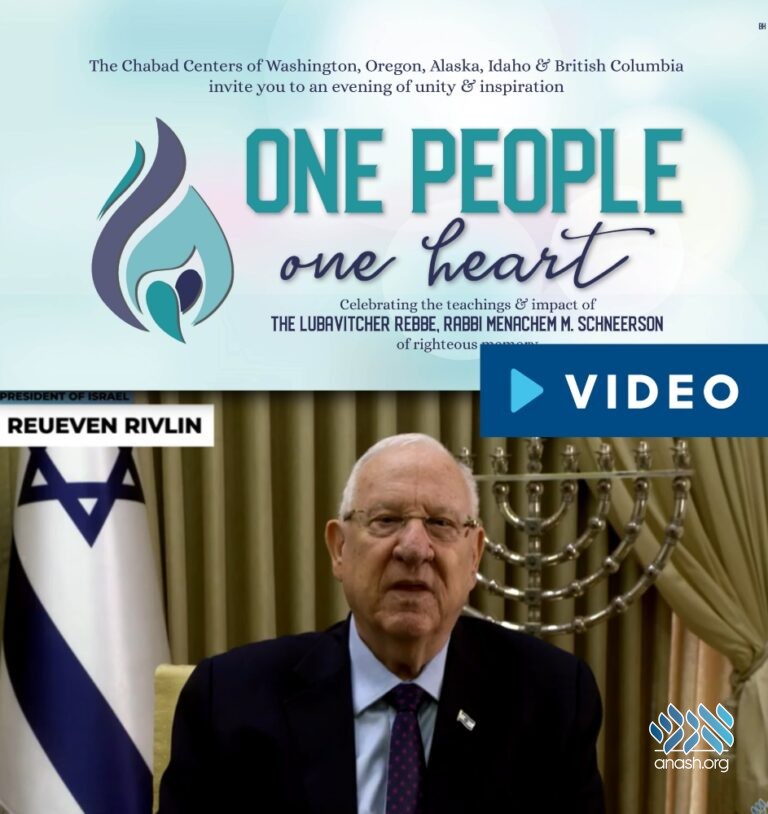 President Ruvi Rivlin of Israel recorded a special tribute to the Rebbe ahead of Gimmel Tammuz, for the annual virtual event gathering hundreds of Jews from the Pacific Northwest to learn from the Rebbe’s life and teachings.

Hundreds of Jews from the Pacific Northwest gathered virtually online for the fourth annual mega unity event entitled “One People, One Heart – An Evening of Unity & Inspiration Commemorating the Teachings & Impact of the Lubavitcher Rebbe”

This years event was hosted by the Chabad centers of the states of Washington, Oregon, Alaska, Idaho & British Columbia & included participants from those states.

The messages were then followed by a program entitled “Light Points” three powerful JEM videos featuring the Rebbe’s unique & inspiring perspective on three fundamental Jewish concepts. The idea of Bitochen trust in HaShem, the power and importance of a Jew being Shomer Shabbos & the Rebbe’s distinct view on people living with disabilities.The program was introduced by various Shluchim from the Pacific Northwest, namely:

Participants were greatly inspired & energized by the event.

“I wanted to let you know that I joined last night’s One People, One Heart event, and I found it so inspiring! It was truly a great event” Kayla

“I really liked the part where the Rebbe said that if there is a conflict between keeping Shabbat and your job, always choose to observe Shabbat, and Parnasah will be taken care of.” Aryeh

“Thank you, Rabbi, I greatly enjoyed the event”
Noach