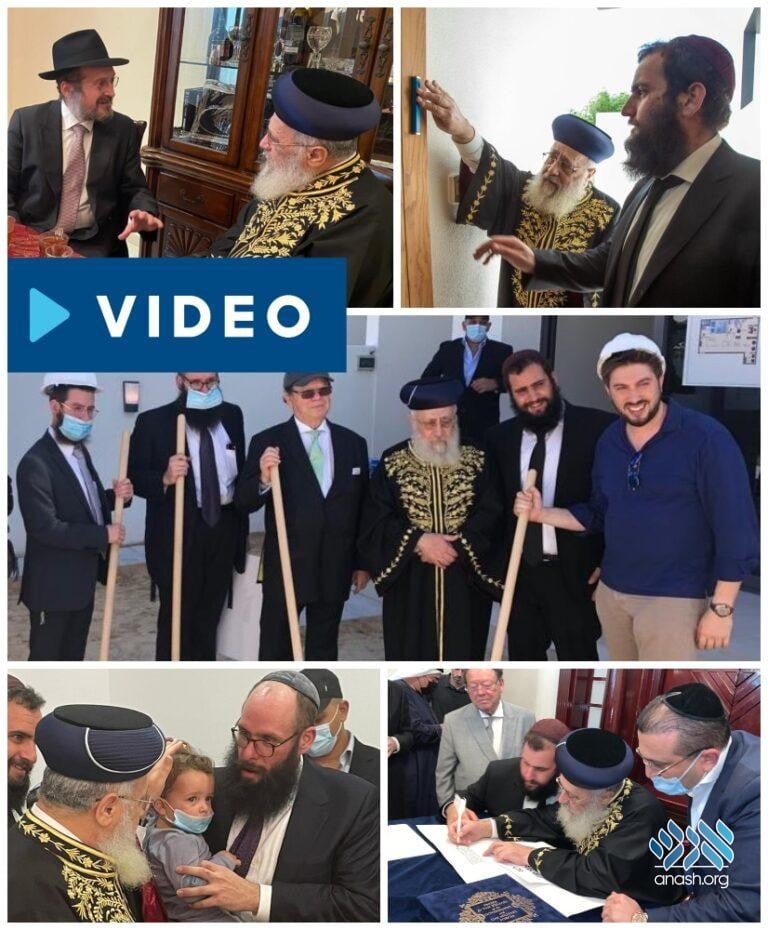 Israel’s Chief Sephardi Rabbi Yitzchak Yosef paid a historic visit to the United Arab Emirates at the invitation of Rabbi Levi Duchman, marking the first visit to an Arab country by a serving chief rabbi.

Israel’s Chief Sephardi Rabbi Yitzchak Yosef paid a historic visit to the United Arab Emirates at the invitation of Rabbi Levi Duchman, marking the first visit to an Arab country by a serving chief rabbi.

The mikva will be the first ever built in the Gulf states and will serve Jewish women from all countries in the region, including Saudi Arabia, Kuwait, Bahrain, Oman and others.

At the welcome ceremony for the Chief Rabbi Yosef, Rabbi Levi Duchman, Shliach and rabbi of the Emirati Jewish Community, said it was a great honor to host Israel’s chief rabbi and called the rabbi’s visit “nothing short of historic.”

“In Muslim countries religious tolerance is not self-evident, here in the UAE they allow it. The Chief Rabbi’s visit will help lay the groundwork for Jewish revival in the country’s developing Jewish community for decades to come,” Rabbi Duchman said.

“The visit of the chief rabbi is as historic as it is a great honor for us to host him here in the Emirates. We are excited to welcome him as we dedicate and break ground on several of our new institutions, which are being constructed with the swiftness and efficiency for which the UAE has become world-famous.”

About 100 Jews spent Shabbos at the Jewish community complex where Rabbi Yosef was staying. Another 400 Jews, mostly Israelis, joined Shabbos meals for tourists hosted by Rabbi Levi and Nechama Levitin.

After Shabbos, the chief rabbi wrote the first letters in the first Sefer Torah ever written in the Emirates. At the ceremony they recited a special prayer for the safety of the royal family and the citizens of the Emirates.

On Sunday, Chief Rabbi Yosef held a round of meetings with members of the Emirati royal family and a number of senior government ministers, including ministers of Religious Affairs, of Interfaith Tolerance, Culture, and Economic Development. The focus of the meetings was to facilitate necessary permits for full Jewish presence in the Muslim country.

Officials from the royal family and ministers who attended the meetings said that the state expects Jewish communities to open in all seven of the emirates. At the moment there are Shuls in the two main emirates, the capital Abu Dhabi, and the economic capital Dubai.