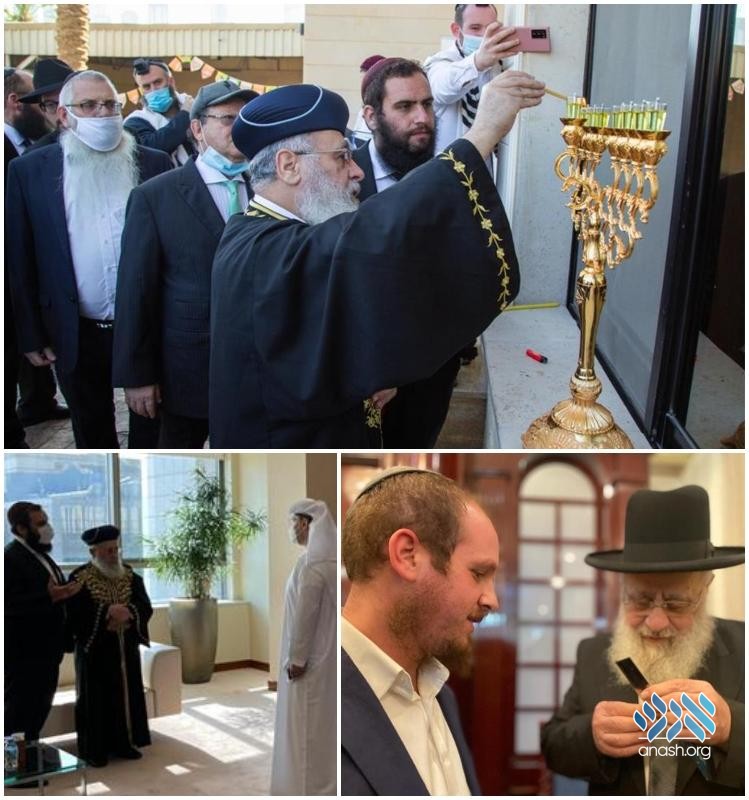 During his recent trip to the Gulf Kingdom, Israel’s Chief Rabbi Yitzchak Yosef met with senior government officials, inaugurated the country’s first Jewish school, and officiated at the ceremony endowing Rabbi Levi Duchman as the Rabbi of the country’s Jewish community.

When Israel’s Chief Rabbi Yitzchak Yosef landed in the United Arab Emirates at the end of last week, he made history as the first-ever sitting Israeli chief rabbi to visit an Arab country. Rabbi Yosef’s visit and reception, which comes following the U.S.-brokered Abraham Accords signed between the UAE and Israel on Sept. 15, signals a new era of Jewish life in the emirates.

“The visit of the chief rabbi is as historic as it is a great honor for us to host him here in the emirates,” said Rabbi Levi Duchman, rabbi of the UAE and director of Chabad-Lubavitch in the Gulf state.

Rabbi Yosef, who has served as the Sephardi chief rabbi of Israel since 2013, landed in the emirates on the eighth night of Chanukah. On Friday he dedicated the Jewish community’s newly certified school, Mini Miracles—the first Jewish school in modern Gulf history—viewed the plans and proposed site for the community’s new mikvah and inspected Duchman’s kosher shechita operation.

“The survival of a Jewish community depends on its adherence to Torah values and Torah learning,” said Chief Rabbi Yosef in his address. “The Jewish community in the emirates is fortunate to have a rabbi that not only teaches Torah, but is working to grow the community and its institutions.”

During the ceremony, Rabbi Yosef expressed his appreciation to the emirati royal family and government for the warm relations and care for the well-being of the Jewish community, and for the thriving new relationship between Israel and the emirates.

“We were fortunate to have been able to discuss with [Rabbi Yosef] the strengthening of the community and its facilities, and receive his guidance on a number of issues prevalent to Jewish traditions and customs,” explained Duchman, noting the detailed halachic responsum Rabbi Yosef wrote regarding the proposed community mikvah.

On Sunday, the chief rabbi and Duchman traveled together to meet with senior government officials and discuss the growing ties between Israel and the UAE, as well as ways to continue to promote mutual understanding between Jews and Muslims across the region. Duchman helped found Beth Tefillah, Abu Dhabi’s Jewish community center and synagogue.

“Following the historic accords between Israel and the UAE, and with gratitude to Crown Prince, His Highness Sheikh Mohammed bin Zayed, we are now entering a new stage of planning and growth,” explained Daniel Seal, a member of Beth Tefillah’s board. “We are looking to cater not only to the resident community, but for the many Israelis who come to visit. It’s an exciting time for the community, and I look forward to working with Rabbi Duchman on the many projects we have planned.”

Solly Wolf, president of Dubai’s JCC, said, “Dubai has already seen the wave of Israelis visiting since the Abraham Accords, and this is just the beginning of the potential for tourism and cooperation between Israel and the emirates. The visit of the chief rabbi I hope will go a long way to cementing the good faith and warm friendships between the Jewish and Muslim peoples of the region.”