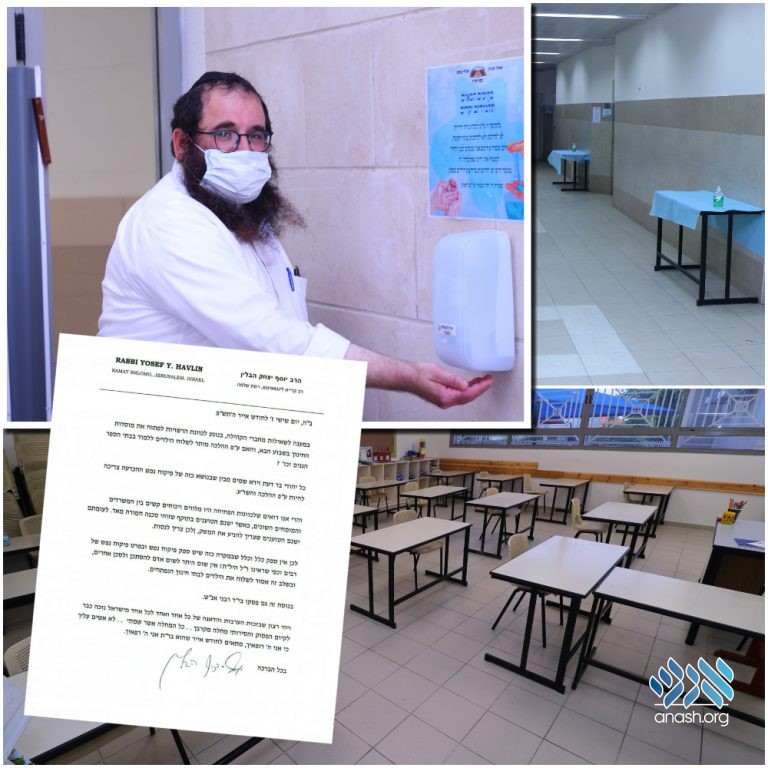 Schools reopened in Israel on Sunday for grades 1-3, and grades 11-12 with special health regulations and smaller classes. Nevertheless, Chabad rabbonim released letters calling on parents to keep their children at home.

Israel’s first through third graders and 11th and 12th graders in the state school system returned to their classrooms on Sunday after seven weeks of long-distance learning due to the lockdown.

The move followed the easing of coronavirus restrictions across Israel, as the number of cases started descending and hospitals started closing their coronavirus wards.

However the move was met with some resistance, and many cities did not re-open schools on Sunday. Some were unhappy starting schools due to the risks involved, and other cities stated that they did not have adequate time to prepare since the Knesset vote on Friday. These locations included Ashdod, Beer Sheva, Haifa, Herzliya, Netanya, Ramat Gan, Rishon L’Tzion, Tel Aviv, Rechovot, Akko, Ashkelon, Tzefat, Karmiel, Kiryat Malachi, Kiryat Gat and parts of Yerushalayim and Beit Shemesh.

In Chabad communities as well, the new law was met with mixed reactions. In Kfar Chabad, the Talmud Torah and the Oholei Torah schools opened with 15 children in a class, and a list of rules mandated by the government, including no food sharing or ball playing. Other schools in Kfar Chabad, and majority of schools in other communities, remained closed for all grades.

Among the Chabad Rabbonim in Eretz Yisroel, the reaction was lukewarm. “We are still unsure if the children will be able to keep the regulations,” wrote the Rov of Kfar Chabad, Harav Meir Ashkenazi. “Additionally, the experts say there is a possibility of the students infecting each other with the virus, and the students then infecting other, leading to a resurgence of cases.”

Based on the above and other considerations, he said not to send young children to daycare, and recommended against sending older children as well.

Harav Yosef Havlin, rov of the Chabad community in Ramat Shlomo, Yerushalayim, wrote an even stronger letter, forbidding any parent from sending their child to school. He notes that there were bitter arguments among the different government ministries if opening the schools is the correct thing to do, concluding that at best, the scenario is one of a safek pikuach nefesh.

The highest rabbinical body of Chabad in Eretz Yisroel released a lengthy letter as well addressing the issue. “Firstly, everyone must follow the directions of their community Rov,” their letter began, before listing recommendations for parents and teachers.

The letter then goes on discuss teachers, minyanim and mikvaos. “May we merit Hashem’s healing and the full and ultimate geulah,” it concludes.