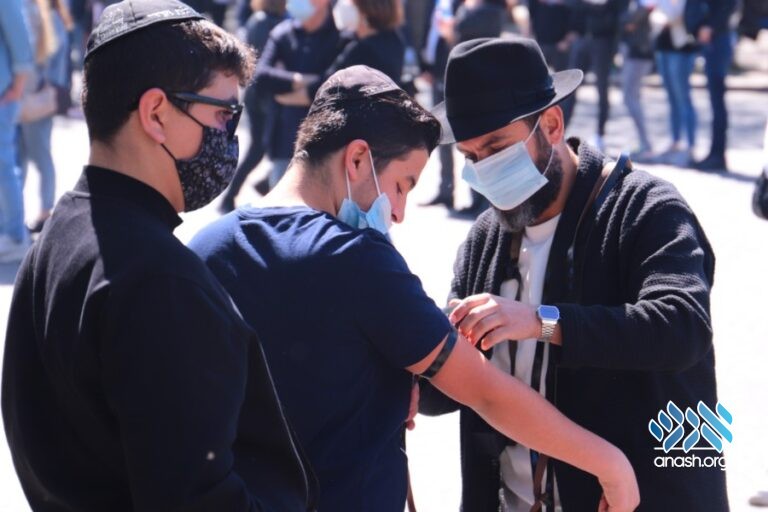 Knesset Member Tamar Zandberg has introduced legislation that would make it illegal to offer a minor to perform a mitzvah, such as putting on tefillin, punishable by up to six months in prison.

An Israeli lawmaker has introduced legislation that would make it illegal to offer a minor to perform a mitzvah, such as putting on tefillin, punishable by up to six months in prison.

Knesset Member Tamar Zandberg, a former leader of the left-wing Meretz party who is expected to be part of the new government, is advancing a bill that would criminalize bringing Jewish youth closer to yiddishkeit.

According to the proposed, “Anyone who persuades a minor to do teshuvah or take another action, directly or indirectly, which may bring about the teshuvah of a minor without the presence and approval of his parents… will receive six months’ imprisonment; for the purposes of this section, ‘teshuvah’ is a transformation from a secular to a religious person.”

The proposed legislation has caused an uproar in Israel with many senior politicians and commentators condemning the bill.

Makor Rishon correspondent Ariel Schnabel wrote: “Tamar Zandberg wants to imprison every Chabadnik who puts tefillin on children. What she does not know is that every Chabadnik who is released from prison is another holiday on the Chassidic calendar, celebrated with vodka, food and dancing. I think the interests here are aligned.”

The Yad L’achim organization responded to Zandberg’s proposal, saying: “For many years we have been trying to pass a law banning activities by the Christian missionaries which aim to convert Jews in Israel. To our great dismay, we did not see MK Zandberg joining us and working to advance this important law, but at the same time she is advancing a new law which attempts to forbid Jews from spreading Judaism among their Jewish brothers.”

“Why is enticing Jews to convert to another religion permitted, but teaching Jews about their traditions, which are thousands of years old, is prohibited?”

Zandberg is not the first left-wing politician to threaten Chabad. Leader of the Yesh Atid Party Yair Lapid is said to have personally threatened one of Chabad’s leaders about their support for right-wing governments.

“If you support Smotrich and Ben Gvir’s party, I will persecute you,” Lapid told the Chabad official. “It will be the end of Hanukkah menorahs on every corner during Chanukah, and Chabad houses around the entire world. It will be the end of your story on loving every Jew.”