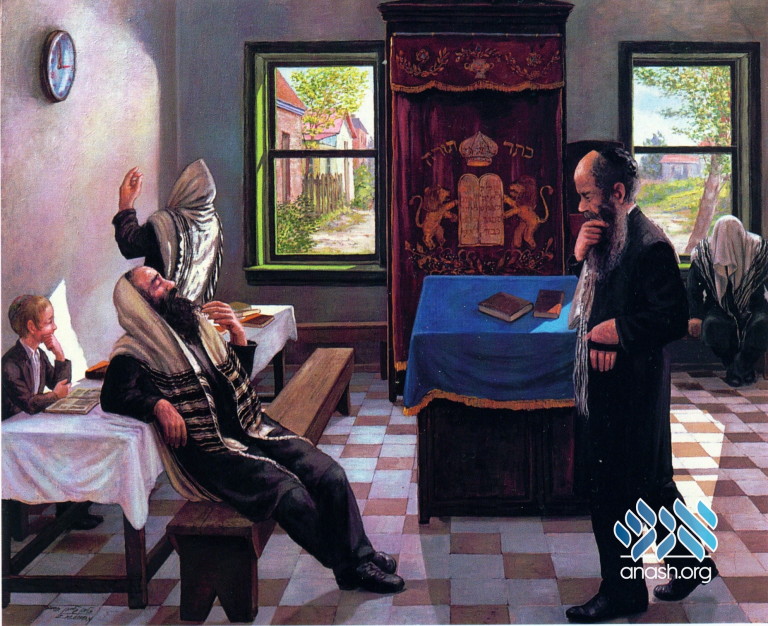 Following the recent discussion on making davening meaningful in our times, we are pleased to bring you selections from an article titled “Avodas Hatefillah in Dor Hashvi’i”, printed in the latest issue of Derher Magazine.

The Rebbe once told the story of a Chossid of the Alter Rebbe who barely knew pirush hamilos, yet he davened for many hours with intense concentration. When asked by Chassidim what he thinks about for so long, he said that he once heard a Torah from the Alter Rebbe on ‘זכור ושמור בדיבור אחד’.

Zachor, the Alter Rebbe said, means always remember. Shamor, keep (guard) in your mind. B’dibur, in every davar—thing. Echad, the oneness of Hashem. And with this vort he davened for 40 years.

This is the response to those who claim that proper avodas hatefillah does not apply to them because they lack a deep background in Chassidus, and maybe they don’t even know the meaning of the words.

From this story we see that a full and comprehensive hisbonenus is to contemplate that everything comes from Hashem. The avoda of a Yid is to find the ‘Echad’ in everything.

This story illustrates that even someone with very little knowledge, if he thinks about the ‘Echad’ in everything, can daven with this for 40 years.

One shouldn’t put off avodas hatefillah until they have the proper knowledge and background; to do so would be falling for another trick of the yetzer hara. As the Rebbe told a bochur in yechidus:

To daven slowly and patiently is a proper thing, but the nefesh habehamis and the yetzer hara don’t want and don’t let. The nefesh habehamis says that since it’s not completely genuine, you shouldn’t daven ba’arichus. Yet the opposite is true; one must certainly daven, what’s the other option? To sit and wait for the davening to be genuine?! To wait until you have the kavanos of the Ramak and the Arizal?! You have to simply do it!

Avoda doesn’t mean breaking mountains and turning over the world. If during davening it takes effort just to keep in mind ‘לפני מי אתה עומד’—that you’re standing before Hashem—and yet you manage to do so, you have successfully accomplished avodas hatefillah!

Who Are You Talking To

It’s not always easy to daven, that’s why it’s called avoda, work. Some people may find themselves identifying with the following description from the Frierdiker Rebbe:

He goes to shul and converses his fill with everyone around him. Then, when the minyan has finished, he starts thinking about avoda, about davening at length. By this point es davent zich nit—he’s not feeling it. So he mouths the words and is yotze.

The reason is simply that he skipped all the hachanos. For starters, he’s missing the basic condition: “One should only get up to daven with a serious frame of mind.”

The most basic preparation requires one to at least consider who is praying, and to Whom he is praying. Even such a meditation is enough to infuse a little chayus in one’s davening.

But if, instead, one’s prayers are preceded by conversation, so that he misses an amen, or an amen yehei shmei rabba, or a barchu—that is the absolute opposite of davening. Obviously, as a result, when he finally does start davening, es davent zich nit. Yet he still deludes himself into thinking that since he davened late, that’s avoda, and that is what makes him a Chossid…

The Basics of Avodas hatefilah

The basic starting point for avodas hatefillah is to realize that one is talking to Hashem. If he would just stop for a moment and think, “I’m about to talk to Hashem,” that would be davening!

One’s mindset during davening is even more integral to this avoda than understanding the meaning of the words.

A person can understand every word of davening, and even know multiple explanations for every word. He can appreciate the depth and the beauty of the nusach, spend hours in hisbonenus thinking deep concepts, and still be missing the most important ingredient: talking to Hashem.

On the other hand, a person may not understand a single word of pirush hamilos, and may even have trouble pronouncing some words, but by knowing to Whom he is talking, his simple davening is true “avodas hatefillah.”

To Whom Are You Really Talking

The Rebbe wrote to the Igud Harabbanim:

I have been disturbed by this matter for a number of years. Everything written in the Shulchan Aruch is clear halacha that must be followed. Even when there is a machlokes in Shulchan Aruch, there are rules to determine what the actual halacha is.

Yet, among certain groups of Jews, even those who are scrupulous in mitzvos, they make an exception regarding a clear halacha about which there is no machlokes.

I am referring to the din that before davening every person must think about “the greatness of G-d Almighty and the lowliness of man, and remove all mortal pleasures from his mind” (Shulchan Aruch Orach Chayim siman 98, end of seif 1).

Why and for how long will the rabbanim, poskim, roshei yeshiva, and teachers, be silent about this halacha? A halacha that has been so neglected that most people don’t even know about it!

This hisbonenus, meditation, does not have a predetermined amount of time. It is adjusted for each person based on his abilities, but it cannot be abandoned entirely.

The Rebbe Maharash once told a Chossid that if he cannot learn Chassidus for longer than 15 minutes a day, he should divide these 15 minutes over the course of the day. The Rebbe explained that the goal was for this Chossid to learn five minutes at a time, three times a day, before every tefillah.

You may ask, said the Rebbe, why are we demanding so little? The answer is that in order to daven properly, and for the davening to effect the whole day, even five minutes is enough.

Of course this is the lowest limit, a minimum of five minutes. For those who are able to, the Rebbe demanded much more:

He should make a true cheshbon tzedek, when was the last time that he was misbonen before davening?

He should sit in front of a mirror, point to himself, and say: when is the last time that you were misbonen in Chassidus before davening, as outlined in Kunteres Hatefila and in the countless maamarim from Nesi Doreinu since then?

He should think about when was the last time that he davened after a hisbonenus of at least an hour, a full hour of 60 minutes, or at least a half hour.

We’re not talking about during the week, it could be even on Shabbos.

The Frierdiker Rebbe related that his father, the Rebbe Rashab, taught him the pirush hamilos twice. Once as a child, and then again starting from his bar mitzvah.

When my father began teaching me pirush hamilos, he said, “Davening without knowing what you are saying is not an option.” He then taught me the basic meaning of the words.

Of course, there are also deeper meanings in davening. But simply knowing the translation of the words is the first step.

Once, at a farbrengen, the Rebbe recounted an incident that occured over 30 years earlier in Paris, when he traveled to accompany Rebbetzin Chana to the United States.

Over 30 years ago, I witnessed something, and I never imagined that it would become relevant so many years later.

When my mother left Russia, I travelled to Paris to greet her and bring her back to America.

During my time in Paris, I met Chassidim who had also recently left Russia. When we davened together on Shabbos, I noticed some of them davening ba’arichus, while singing a chassidisher niggun and snapping their fingers.

True, I can’t know for sure what their motivations were but when you see someone learning Chassidus before davening, and after that he is davening ba’arichus with a chassidisher niggun, you can assume that it’s connected with avodas Hashem.

Some of those Chassidim that I saw davening ba’arichus in Paris are here with us now. And just this very day I saw them davening with no chayus and no shturem in avodas hatefilah!

In the state they were in then, recent immigrants, they were busy with avodas hatefilah. But after they came to the United States with Hashem’s help, and were blessed with parnasa, healthy families, and even with wealth, suddenly there is no avodas hatefilah anymore!

To someone who complained that they did not see results from davening, the Rebbe wrote, “Just imagine how things would look if you stopped investing in davening…”

The Rebbe concluded that it was certain that davening made a difference in him, but for whatever reason his eyes were not picking it up. The therefore Rebbe gave him some direction on how to enhance his “eyesight.”