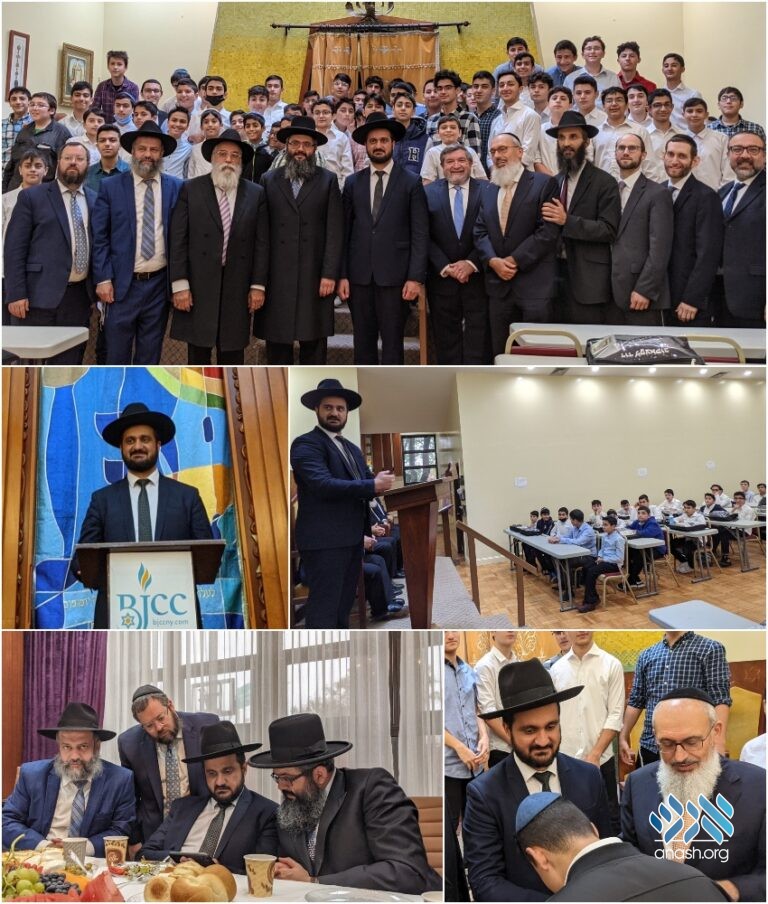 The Chief Rabbi of Iran, Rabbi Yehuda Gerami paid an visit to the Ohr Avner Schools in Queens. Over Shabbos, the chief rabbi will be staying and speaking in Crown Heights and he will be attending the Kinus banquet on Sunday.

On Thursday, the second day of the Kinus, the Chief Rabbi of Iran Rabbi Yehuda Gerami, paid an official visit to the Ohr Avner Schools in Queens, New York, under the leadership of the Rebbe’s Shluchim, Rabbi Zalman Zvulonov and Rabbi Levi Yitzchak Wolowik.

He was received by a delegation of community leaders, led by Rabbi Baruch Babayov — the chief rabbi of Bucharian Jewry in the United States — who brought Rabbi Gerami through the chambers of the Beis Din and discussed with him the latest ‘current affairs.’

After a sumptuous breakfast, the chief rabbi was given a grand tour of the educational institutions spread throughout Queens which see thousands of children streaming through their doors each morning — the schools established by, and with the vision of, the great philanthropist Reb Levi Leviev.

At one institution after another, he was impressed to see the professional education and the unique approach provided by each of the schools; he visited the elementary school, the boys high school at the new Chai Center, the Or Chana Girl’s Highschool, the wing dedicated to special education, Ganeinu Academy in Jamaica, NY, the Museum of Bucharian Jewry, and the new school campus which opened this year — Lamplighters.

The tour of the educational institutions was given by the principals and educational staff of the institutions, led by Rabbi Shmuel Kogan, Rabbi Gottlieb, and Rabbi Asher Henkin.

Rabbi Gerami told the surprised students about the thriving Jewish life that exists in Iran without persecution. The rabbi said that twenty thousand Jews live throughout the country; each Friday night, his synagogue is packed with hundreds of worshippers, and the educational institutions are filled with young and lively students.

At the Bucharian Community Center, the rabbi was delighted to see the beautiful sanctuary and the immense Aron Kodesh with traditional Bucharian Sifrei Torah. At the close of the tour, an official reception was held by community leaders led by Mr. Boris Kadanov, who also serves as the president of the Bucharian Jewish Congress in the United States. The editor of the popular Bucharian Times, Mr. Rafi Naktalov, was present as well.

This Shabbos, the chief rabbi will be staying in Crown Heights and will be addressing community members in several shuls. On Sunday, he will be attending the official banquet of the Kinus.