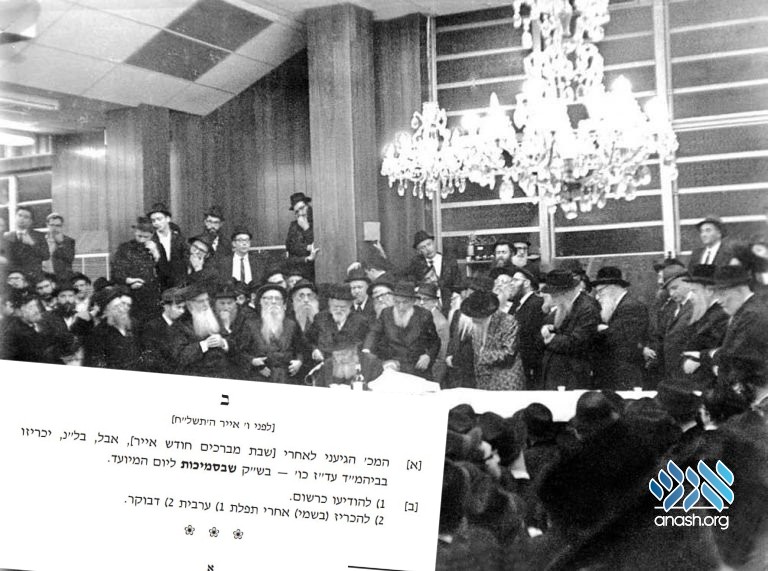 In 5738 the Skulener Rebbe made a dinner to benefit his kollel in Crown Heights. The Rebbe’s response showed the deep respect and appreciation he had for the rebbe who remained in the neighborhood when many fled.

A answer of the Rebbe just published for the first time sheds light on the unique relationship between he had with the Skulener Rebbe, and his appreciation for all frum mosdos in Crown Heights.

In 5738/1978, the Skulener Rebbe was still living in Crown Heights. It wasn’t easy for him, with most of his Chassidim and admirers already out of the neighborhood, but the Rebbe’s very vocal opinion that Jews ought not to leave their neighborhoods was known to him and he would not leave Crown Heights.

Sometime before, the Skulener Rebbe had started a kolel in Crown Heights. The Kolel specialized in the Halacha and had some Lubavitcher yungeleit learning there. They had scheduled a dinner for the 7th of Iyar, 5738 and wanted to send the Rebbe an invitation so that it reaches the Rebbe before Shabbos Mevorchim Iyar. The idea being that the Rebbe would speak about it at the farbrengen on that day and encouraging anash to attend the dinner.

In 5738/1978, after the events of Shemini Atzeres that year, the Rebbe would farbreng on Motzoei Shabbos, as was the case that Shabbos Mevorchim, Erev Rosh Chodesh Iyar.

The Rebbe instructed the secretariat to announce about the dinner in 770, in the Rebbe’s name, on the following Shabbos, the one closest to the event, 6 Iyar, after both Kabbolas Shabbos and Schachris.

The answer, published for the first time in this week’s Hissvadus booklet by Lahak Hanachos, sheds light on the mutual respect and appreciation between the two great leaders, and the lengths the Rebbe went to support a mossad that remained in Crown Heights, despite all odds.