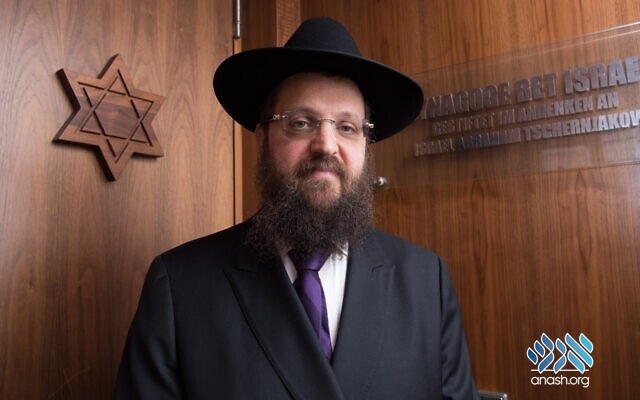 09 August 2019, Berlin: Rabbi Yehuda Teichtal, taken before the beginning of a solidarity prayer. The rabbi, accompanied by one of his children, had been insulted and spat on in Arabic by two men at the end of July. Photo: J√∂rg Carstensen/dpa (Photo by J√∂rg Carstensen/picture alliance via Getty Images)

The investigation into the July attack on Berlin Shliach Rabbi Yehuda Teichtel was dropped by state prosecutors.

Rabbi Teichtel was walking home from Shul with his son when several men insulted him in Arabic and spat on him from an apartment balcony.

Four suspects questioned by investigators reportedly denied any involvement in the incident. No evidence was discovered on confiscated cell phones and no other witnesses were found, and prosecutors claimed that they were unable to proceed in the case.

Rabbi Teichtal told reporters he was disappointed in the outcome and suggested laws needed to be changed to make it easier to charge suspects in cases like his.

“We need this as Jews, given the increased threat of anti-Semitism,” he said. “The entire society needs this.”

The incident was one of several attacks last summer on Jews in the German capital. At the time, Teichtal said he was still convinced that “most people in Berlin want Jews to be able to live openly as Jews, without fear of being cursed at, spat on or beaten up.”

Approximately 1,800 anti-Semitic incidents were reported in Berlin in 2018, an increase of nearly 20 percent above the previous year.