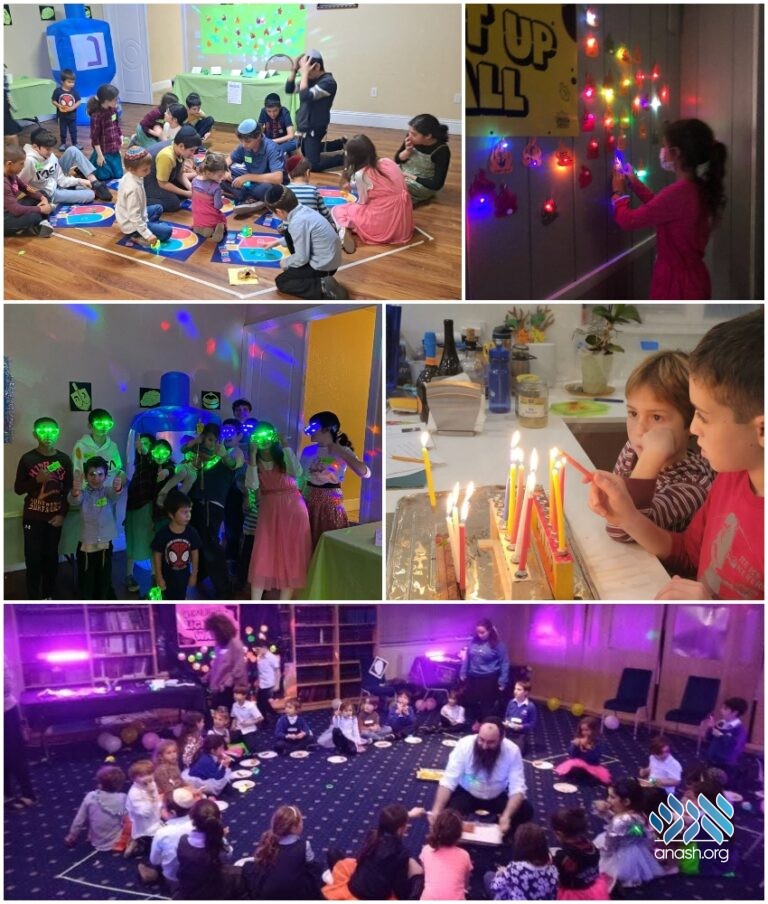 In the past, many Chanuka parties consisted of a menorah lighting and entertainment for the children, such as a juggler or magician; hence the Yiddishkeit and the fun were disconnected. Over the past decade, Ckids Shluchim have been bridging this divide.

As we put away our Menorahs for next year and say goodbye to donuts for a while, Chanukah isn’t over for thousands of Shluchim around the world. Instead, you could say that the impact has only just begun.

This Chanuka, CKids shluchim came together to create transformative Chanuka experiences for tens of thousands of Jewish children around the world. “Chanukah is an opportunity to engage each child,” says Rabbi Zalmy Loewenthal, CKids director. “And that’s exactly what shluchim did.”

Holiday learning got started with powerful PowerPoint presentations shown to tens of thousands of Chabad Hebrew School kids, translated into German and Spanish as well.

The curriculum was used in Berlin, making it the first Ckids program to be used by German Jewish Kids and it was received with an enthusiastic response from the kids, parents, and teachers.

Translating the program into Spanish as well allowed children in over eight Spanish-speaking countries, some of them still without a permanent Hebrew school, to have access to a high-quality learning program. The engaging curriculum will be used as a springboard to start new Hebrew Schools in Latin America.

The innovative programming has been making kids excited to come to Hebrew School, something that for many Jewish kids was once considered a chore.

The fun experience at CKids Hebrew Schools has some young families transferring from other schools to Chabad. Mrs. Sara Alevsky, Chabad of the West side, explains how a new family recently moved from another Hebrew School to their Chabad Hebrew School. “The parents are so happy that they found Chabad for their kids,” the shlucha explains. “They said Hebrew School used to be a huge battle and now their kids are so excited to go.”

In the past, many Chabad house Chanukah parties consisted of a menorah lighting ceremony and entertainment for the children, such as a juggler or magician; hence the Yiddishkeit and the fun were disconnected. Over the past decade, Ckids Shluchim have been bridging the gap by providing exciting and immersive experiences to their communities that teach Jewish kids about their heritage in a fun way. The children leave the party fully knowledgeable of the Jewish Holiday without needing to sit through speeches or ceremonies.

This fun and empowering method was used this year at the Chanukah CKids Club, a Chanukah-themed disco party, used by Shluchim worldwide. Kids had a blast learning about Chanukah through dance games. Shluchim gave out dreidel fidget spinners that, “were the biggest hit,” says shluchim. The glow-in-the-dark themed club had, “parents completely wowed,” said Mrs. Dabrushy Pink from Leeds, England, “really next level.”

The Shluchim led their Hebrew Schools in Tzivos Hashem rallies, with tens of thousands of kids around the globe participating. Shluchim also personalized and distributed their very own copies of a Chanukah CKids Tzivos Hashem magazine, full of fun articles, pictures of local kids, and holiday recipes. The magazine ties together all the Ckids programs that Shluchim offer, such as Hebrew School, JewQ and Holiday Clubs. Seeing themselves in the Magazine allows the children to identify with being a soldier in Hashem’s Army and learn about the special mission they have. It also gives parents a chance to experience the collective impact the Shluchim are having on their family and community.

Every Chanukah, Menorahs are usually given out to the adults, but this year CKids Shluchim came up with a new idea—special menorahs just for the kids! The Menorahs were part of a broader campaign called “Share It!” encouraging kids to share a Menorah with their Jewish friends who didn’t yet have one. The menorah came in a fun, child-friendly designed box and a Tzivos Hashem Mission for the kids to submit. The kits were given out by CKids shluchim worldwide to Ckids Mitzvah Ambassadors who then “Shared it” with their friends, reaching thousands of Jewish children who were able to light their very own menorah this Chanukah.

Meanwhile, the Chanukah mitzvah meter, an initiative launched by CKids to get children around the world to pledge mitzvos, is already up to 78,738 mitzvos—and counting. The Meter makes doing Mitzvos fun by having the kids spin a virtual wheel that lands on a specific Mitzvah they should do. “My Hebrew school children are so excited to fill in their Mitzvos this Chanukah,” says Mrs. Nechama Greenberg, a Shlucha in Oceanside, California, “I am amazed how the children are begging their parents to do more, thanks to the Mitzvah meter. I am so appreciative of this incredible tool for us!”

“Chanukah time is an incredible opportunity to engage young kids in Yiddishkeit and the resulting ripple effect is endless” says Rabbi Mendy Kotlarsky, Director of Merkos 302, “seeing their faces radiate with joy when they do a Mitzvah or fill out Tzivos Hashem Missions really brings it home. We’ve seen that youthful energy in Ckids children inspire countless families closer to Yiddishkeit.”