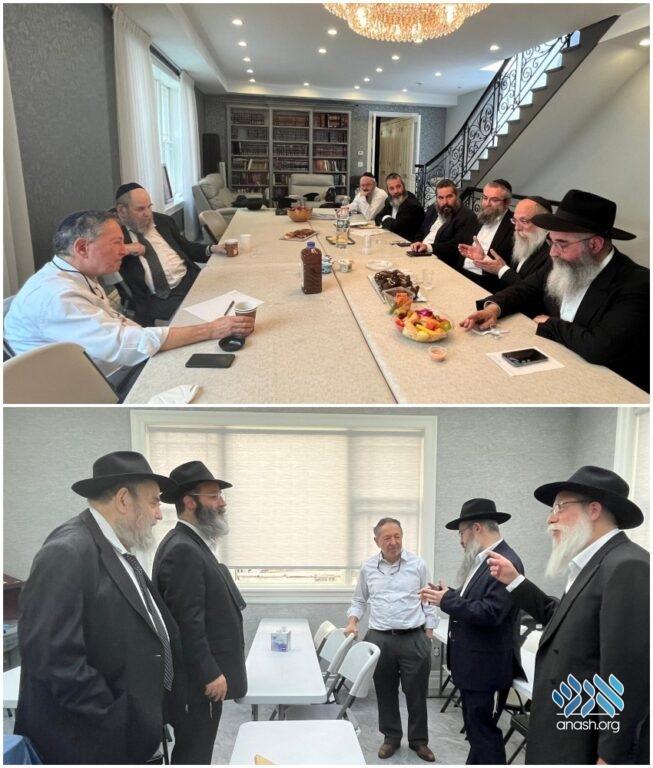 Two and a half months after the start of the war in Ukraine, a delegation of shluchim to Ukraine met with Rabbi Moshe Kotlarsky and philanthropist George Rohr, to prepare for a gradual return to the country.

For the first time since the outbreak of the war, chief rabbis of Jewish communities in war-torn Ukraine are preparing for a gradual return to the country.

At a conference last night in New York, shluchim and community representatives dealt with long-term planning of a solution for the situation and the well-being of Ukrainian Jews.

The meeting was held at the home of Rabbi Moshe Kotlarsky, vice chairman of Merkos L’inyonei Chinuch, and was joined by philanthropist George Rohr, one of the largest supporters of Chabad organizations in Ukraine for the past 32 years.

Members of the Rabbinical Committee for Ukraine include the rabbi of Dnipro, Rabbi Shmuel Kaminetsky, who has been in the Ukrainian city since the outbreak of the war, rabbi of Odessa Rabbi Avraham Wolf, rabbi of western Ukraine Rabbi Shlomo Wilhelm of Zhitomir, rabbi of Kharkiv Rabbi Moshe Moskowitz and Rabbi Pinchas Vishetsky of Donetsk.

At marathon meetings that lasted a full 24-hour stretch, shluchim laid out a comprehensive and detailed overview of the rescue activities of hundreds of thousands of Jews to safe havens, welfare and charitable activities.

The highlight of the meeting was the decision to gradually reopen the institutions and the careful return of the community rabbis and Chabad emissaries to their hometowns.

Today, 155 rabbis serve in about 30 different communities in Ukrainian cities. A number of them remained in the country under fire, since the onset of the war. However, a large majority were forced to flee, due to the fierce attacks in their cities of residence.

Since the war began, most of the rabbis and many members of their congregations have been evacuated via special rescue operations. And yet, the rabbis continued to manage their communities remotely, supplying food and life-saving equipment for the Jews who stayed behind. In some places, such as in the cities of Dnipro, Odessa, Kherson and others, the rabbis remained at their place of residence.

The physical return of the rabbis of the communities and Chabad emissaries to the countries who left will assist in reuniting communities that were torn apart, preserving what is left of them and redeveloping the community institutions.