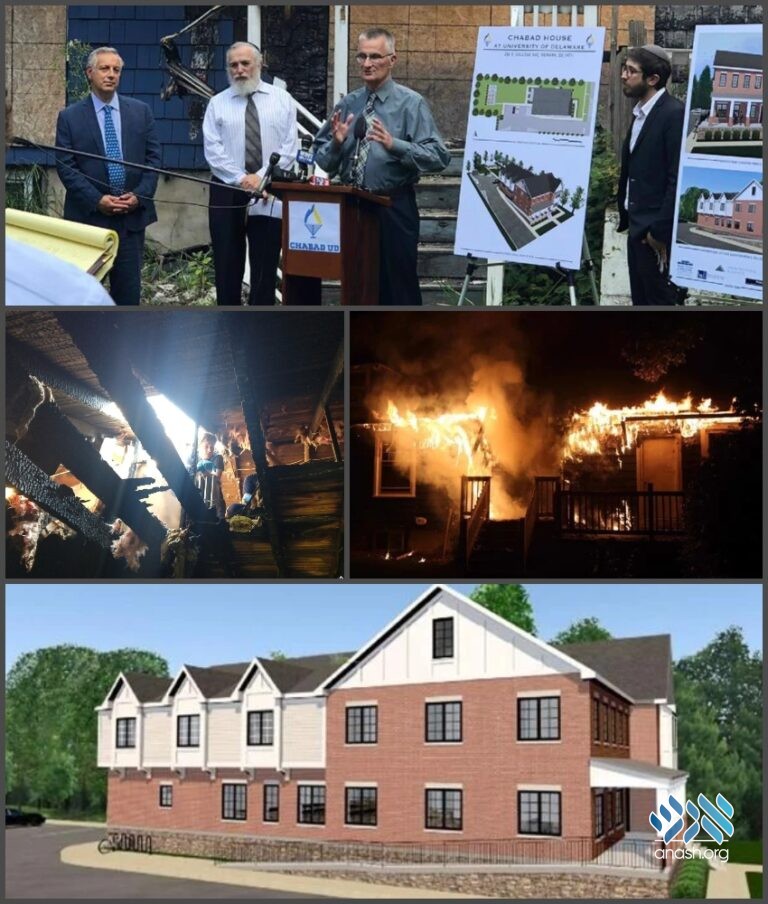 One year after an arson devastated the Chabad House at the University of Delaware, Shluchim Rabbi Avremel and Shulie Vogel, unveiled plans for a new home before a crowd of students and University officials.

One year on, the horror and pain of losing their beloved Chabad House to arson has given way to hope and rebirth—just in time for Rosh Hashanah, the Jewish new year. For Rabbi Avremel and Shulie Vogel, the events of Aug. 25, 2020, when they looked on in disbelief at the charred remains of their Chabad center, will remain seared in their consciousness. But 12 months later, tiny green buds begin to poke their skinny heads out of the scorched earth. The forest is regenerating.

“One year ago, our world was turned upside down, falling victim to this act of hate right here at the University of Delaware,” Rabbi Avremel Vogel, co-director of Chabad UD recalled at a one-year commemoration gathering on Monday. “While we were always committed to rebuild, none of us could really see a clear path ahead of us. We had faith, we had resolve and we had conviction, but that was about it.”

With the Vogels’ faith, G‑d’s help, and a fundraiser launched by students and alumni, the dream of rebuilding began to materialize. After only two weeks, they had raised more than half-a-million dollars, with donations pouring in from friends, alumni and anonymous donors from around the world. $18,000 came from a television producer. An anonymous donor gave $10,000. In the months since, they’ve raised almost two-million of the estimated 3.5 million-dollar price tag of the new building.

“That unprecedented act has given way to an unprecedented wave of love and support,” Vogel told students, friends and City and University officials, as he unveiled the architectural blueprint for Chabad’s future home. “How the tide has turned. We have the wind in our sails and we’re off to the races!”

The new center will be the beating heart of Jewish life on campus, with a dedicated student lounge, a dining area, library, synagogue, mikvah and a commercial kitchen, nourishing students physically, spiritually and emotionally. The space will also house living quarters for the Vogel family in an upstairs apartment.

“The fire was not the end of the story, but rather it was the beginning of a great new chapter,” UD President Dennis Assanis reflected. “We turn adversity into opportunity. Thousands of Blue Hens and alumni here and around the world, no matter what their religious beliefs are, stood up and reached out to help rebuild.”

Triumphantly blowing the shofar, Vogel’s father, Rabbi Chuni Vogel, regional director of Chabad-Lubavitch of Delaware, expressed his hope for the future. “It is meaningful and appropriate that today, as we prepare for Rosh Hashanah, the New Year, we share the visions and the plans of a far better and stronger student center.”