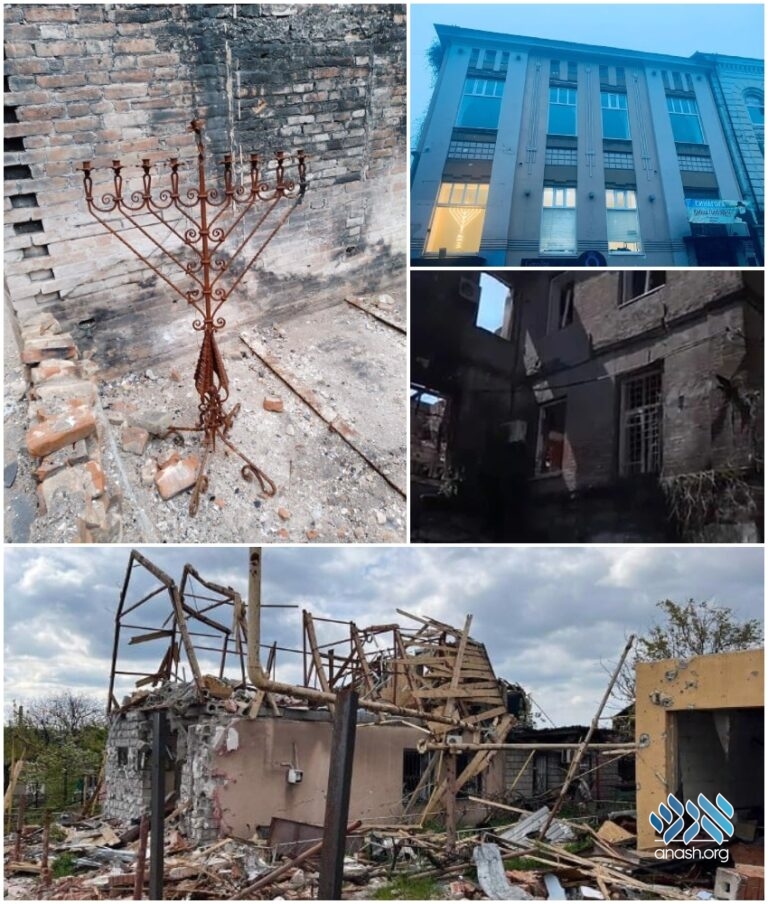 On the night before Chanuka, the large metal menorah that had once graced the shul in Mariupol, Ukraine was pulled from the rubble of the intense fires that destroyed the building. “There’s a sense of great emotion in our community,” says Rabbi Mendel Cohen.

There is almost nothing left of Mariupol, the industrial Ukrainian city obliterated during the first months of the war. Gone is the city’s theater, where some 300 people were killed in an airstrike in May. Homes, stores, hotels and parks have likewise disappeared—they, like the streets they once lined, turned to rubble. Mariupol’s lone synagogue was not spared either. Only the facade remains.

But on Motzei Shabbos, workers pulled something out of the debris: the large metal Chanukah menorah that had once graced the synagogue sanctuary. It had somehow survived the intense fires that destroyed the building and was recovered a day before Chanukah.

News of the miraculous discovery has quickly spread among members of the Jewish community of Mariupol—men and women who’ve experienced the loss of friends, neighbors and loved ones, not to mention the city they once called home, and are now exiled in locations around the world.

“There’s a sense of great emotion in our community,” says Rabbi Mendel Cohen, director of Chabad-Lubavitch of Mariupol and the city’s only rabbi since 2005. “The overall feeling is that we are witnessing the idea that ‘a little light dispels much darkness.’”

For years, Cohen’s synagogue had operated out of his modest Jewish community center in Mariupol. Sometime before the war, as Jewish life in the seaside city continued expanding, the rabbi sought bigger premises and rented a large space for a synagogue in a solid building on Prospect Mira in the city center, using the old building for storage and limited programming. Both buildings were destroyed.

The message Cohen received on Saturday evening came from Andrei, the non-Jewish owner of the building where the new synagogue was housed.

“As you probably know, only the walls of the building remain—everything else burned down and collapsed,” he wrote to the rabbi. “A layer of debris, ash and clay had formed on the ground floor almost 70 centimeters [2.3 feet] thick. We’ve just finished clearing everything and dug out the large Chanukah menorah. Mariupol’s menorah.”

Andrei was very moved by the discovery, telling the rabbi that he’s saving it so he can return her to the new synagogue in Mariupol whenever that time comes. The rabbi thanked Andrei for the respect and care he’d shown for the eight-branched Jewish symbol. “I did nothing special, only what I could and what I had to,” he wrote back. “This story is not about me—it is a story about God and about a miracle!”

Andrei could not believe that the menorah had “survived in this inferno. I myself saw the molten metal there, and the fact that it did not collapse is really a miracle!” He noted that workers had been clearing out the building for a month and could have easily thrown it out along with all the other twisted metal they’d carried out.

“It seems to me that it would be right for candles to be lighted on the menorah this holiday as well,” Andrei wrote to Cohen. “You tell us how to do it, we will do it.”

Which is what happened. Cohen explained to Andrei how to light the Chanukah menorah, and the latter kindled it on the porch of his home in Mariupol.

Cohen, his wife Esther and their children were thankfully outside Mariupol when the war began in February, doing everything they could in all the months since to rescue and care for the surviving Jews of Mariupol. Cohen did not rest during the worst battles of the war, when Mariupol was being transformed into a mass cemetery, organizing transports out of the smoking city and making arrangements for refugees. This Chanukah, the Cohens are organizing a special holiday program for the many Jewish Mariupolites now in Israel. The rabbi estimates that about 70 community families remain in what’s left of Mariupol, and he regularly sends them supplies of food and medicine.

Chanukah there was once a big, grand holiday—a public display of Jewish pride embraced by Jews and non-Jews even during the post-2014 years, when Mariupol felt the dangers of imminent war far more than most of Ukraine. Even when the city’s giant outdoor menorah could not be lighted—the gathering, which always took place in the central plaza outside the now-famous theater, was canceled in 2015 due to tensions on the nearby frontlines—the smaller, five-foot menorah was always lighted indoors.

This year it looked like that would not happen, that is until the last-minute discovery of the Chanukah lamp—intact and ready to be lit.

Andrei is now the keeper of Mariupol’s menorah. On Sunday evening, he sent the rabbi a picture of the menorah on his porch, one candle lighting up the dark night. He wrote: “This story is about faith and hope.”

To assist the Jewish community of Mariupol, donations can be made here.