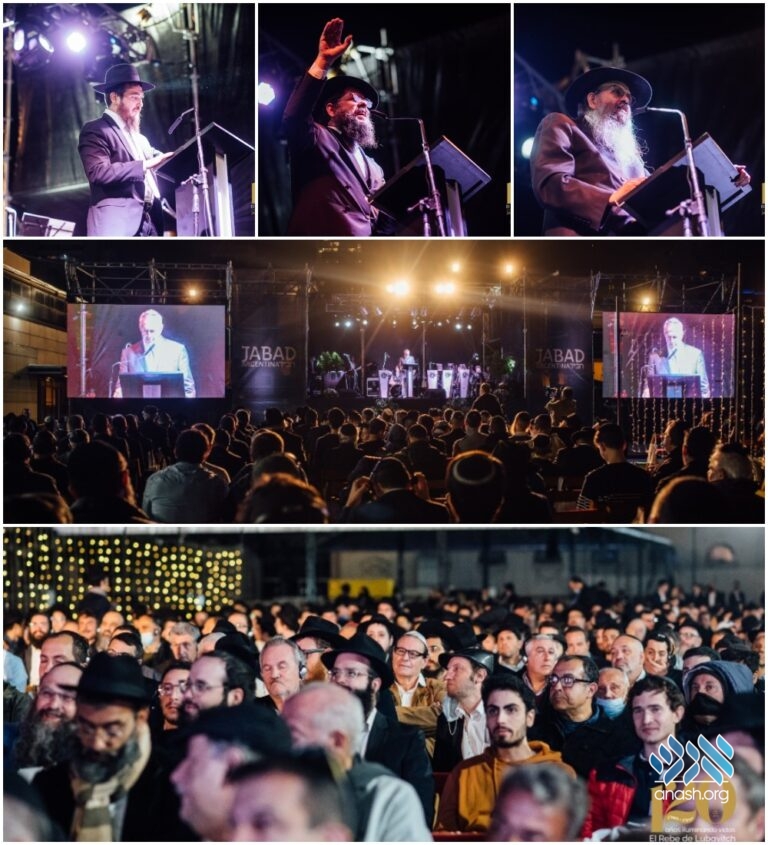 On Monday night, in Buenos Aires, Argentina, 3,000 people attended an emotional event in honor of the Rebbe’s 120th birthday, with a focus on strengthening the path forged by the Rebbe with concrete action.

On Monday night, in Buenos Aires, Argentina, 3,000 people attended an emotional ceremony in honor of the 120th birthday of the Rebbe. The outstanding event organized by Chabad Argentina featured two international speakers; United States Ambassador to Argentina, Marc Stanley and Israeli Rabbi Shneor Ashkenazi. They both highlighted the work of Chabad internationally and locally.

The President of AMIA, Ariel Eichbaum, spoke eloquently of the impact of the Lubavitcher Rebbe on the entire world. Rabbi Tzvi Grunblatt, General Director of Chabad Argentina closed the evening by introducing numerous projects developed to strengthen the path forged by the Rebbe with concrete action.

“We want to reach 120 million maasim tovim (good deeds),” explained Grunblatt, “and 360 million more.” He invited everyone to undertake an additional solidarity action. Rabbi Grunblatt introduced the ‘I shared Matzah, I shared freedom‘ campaign, which invites each person to give a Pesach Kit to a loved one, and ensure that Matzah Shmura is on the largest number of holiday tables. The kits can be ordered at pesajargentina.com.

Rabbi Grunblatt also reported that there are 10 governors, in addition to the Head of Government of the City of Buenos Aires, who declared April 12th 2022 as a Day of Education and Solidarity in honor of the Rebbe’s birthday. Next Tuesday in the City of Buenos Aires, and in 13 national territories, a project will be implemented to raise awareness of societal values based on the 7 Mitzvot Bnei Noach.

“Because principles have to be translated into action, we launched a campaign titled Your Action Illuminates”, Rabbi Grunblatt announced. The project seeks to reach 1,200,000 children who, starting April 12, will be able to put 10 pesos in a large coin bank at their school. Later the institution’s management will define what good deed will be carried out with the amount collected. All the information can be found at tuaccionilumina.com. “These are concrete actions,” stressed Grunblatt, “that is the greatest pleasure of the Rebbe.”

In an emotionally charged event, with musical interludes by Chazan Lionel Mizrahi and a band of 8 musicians, was not only about paying homage to the Rebbe, but also of conveying the importance of daily action, where every deed has an impact. Israeli guest speaker, Rabbi Shneor Ashkenazi summed it up: “Sometimes dreams come true. For me, seeing the Rebbe’s legacy in Argentina is a dream come true.”

The program, which was also followed by 900 people virtually through 120delrebe.com and Instagram, was attended by National Deputy Waldo Wolff, the General Director of the Teatro Colón, Jorge Telerman, the president of Arsat, Matías Tombolini, the 1st Vice President of DAIA, Marcos Cohen, and Adrián Moscovich, among other important personalities.

The evening left an indelible impression on all those that attended, with thousands committing to take positive action as a result.