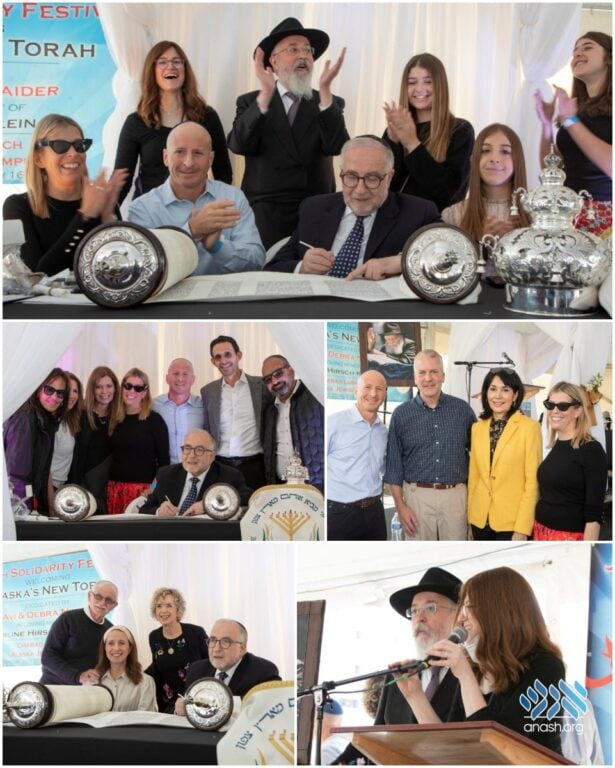 Jews from all walks of life celebrated the dedication of a new Torah at the Chabad Lubavitch-Alaska Jewish Campus, including Satmar chassidim, Litvish roshei yeshiva and their students, modern orthodox and unaffiliated Jews.

A great demonstration of unity and Jewish pride took place last week in Anchorage at the historic dedication of a New Alaskan Torah at the Chabad Lubavitch-Alaska Jewish Campus, headed by The Rebbe’s Shluchim Rabbi Yosef and Esty Greenberg and Rabbi Levi and Musky Glitsenstein.

The New Alaskan Torah was donated to the Alaskan Jewish Community by Avi and Debra Naider, in loving memory of Mrs. Arline Hirsch Klein z”l. Alaska’s US Senator Dan Sullivan and Julie Fate, and Anchorage’s newly elected Mayor Dave and Debra Bronson attended the event and shared greetings on behalf of the State of Alaska and the City of Anchorage.

It was an unusual scene to witness. Participants from all walks of life in the Jewish community, from members of the Satmar community to litvish roshei yeshiva and their students, to modern orthodox and unaffiliated Jews, all danced and celebrated together with such great love of the Torah and unity of the Jewish people!

Among the hundreds of people who joined the Torah dedication parade were also tens of teenagers from prestigious New York and New Jersey camps such as Camp Seneca, Camp Kanfei, as well as yeshiva students from Camp Yachad who joined at the end of the event. The event was also attended by the Shluchim of Alaska’s Mat-Su valley Chabad Jewish Center, Rabbi Mendy and Chaya Greenberg.

The Naider’s from Florida who have been visiting Alaska every summer for many years, have become dear friends and dedicated members of the Alaska Jewish Community. Many family members and friends from Israel and the US flew in specially to join the Naider’s for this unique event.

The event included a Musical Torah Parade, a BMX Pro Bikers show all the way from Southern California, lavish barbeque dinner by Chef Carry Herskowitz from Detroit, live music by Rabbi Levi Greenberg, and lots of fun activities for the children.

This community celebration also provided an opportunity for a Jewish Solidarity festival, in response to a hate crime that took place several months ago with swastika stickers being plastered on the Alaska Jewish Museum building, which is adjacent to the Chabad Lubavitch Alaska Jewish Campus.

A visiting Shliach Rabbi Mendi Katz of the Aleph Institute in Florida was putting on tefillin with many Jews who attended the event. One of them was a young Jewish man from the Eagle River town not too far from Anchorage, and it turned out it was his first time putting on tefillin. The Rabbi told him that this was his Bar Mitzva today.

The Young yeshiva boys from Camp Yachad got so excited and one of them took this young man on his shoulders and all the yeshiva boys were dancing with him for a long time.  This young man was moved to tears and made a commitment to get involved with his Judaism and attend more often the Chabad center. His Jewish grandmother who was visiting from New York was moved to tears to witness her grandson becoming Bar Mitzva, putting on tefillin and receiving such an exciting and joyful celebration.

Alaskan Jews, the Naider’s, their family and friends, all the camp students, and the rest of the out-of-town guests will remember forever this historic and unusual event which left such an amazing impression on all attendees and no doubt gave a lot of nachas to the Rebbe.