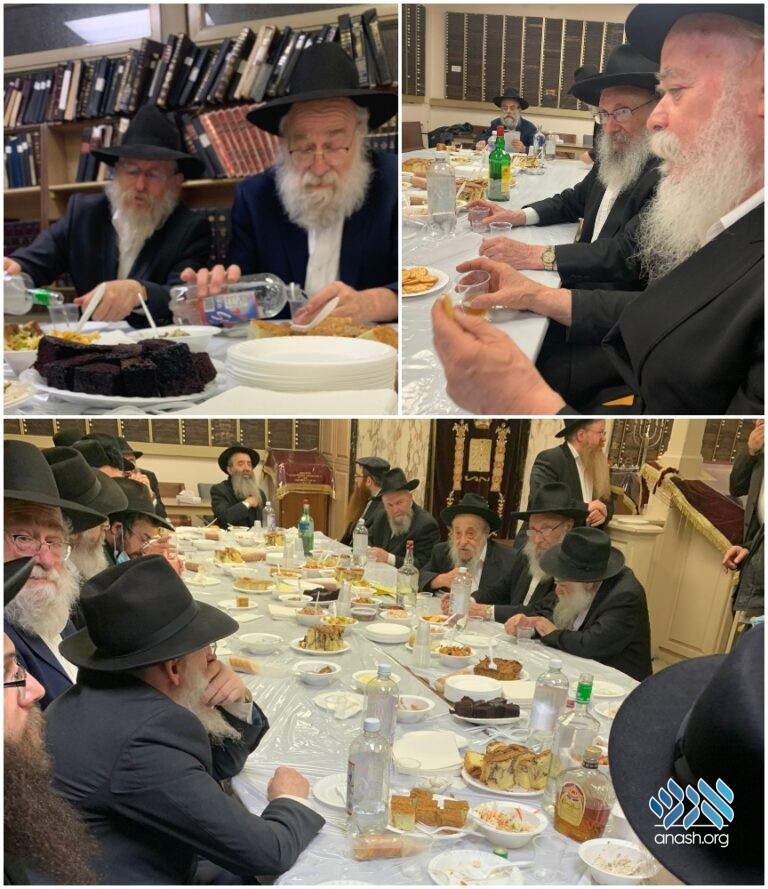 While attending a farbrengen marking Yud Kislev in the Yeshiva Shul of Montreal, Rabbi Zvi Hershcovich wrote down his impressions, giving a window into the classic chassidishe city with a touch of humor.

I walked into Montreal’s Lubavitch Yeshiva basement for Maariv and discovered an impromptu old school Farbrengen set up in honour of Yud Kislev, celebrating the release of the Mitteler Rebbe from imprisonment by Czarist Russia in 1826.

Farbrengens in the Yeshiva basement Shul™ have not changed in 60 years. I’m pretty sure the gefilte fish & marble cake are just defrosted remnants of a large Kiddush prepared by Chef Soussan back before the basement kitchen was turned into a Mikvah.

As Maariv gets ready to roll, a mini-Farbrengen has already begun in the legendary corner at the “L’Iluy Nishmas Table.” The conversation is heated, Lechaims are being made, beards are being secured with clothes pins for the inevitable Chassidishe yank.

At a table in the back, learning a Maamar Chassidus, are two Chabad Montréal community heroes. The conversation between them is eclectic. Efraim Rivkin is trying to explain Sovev Kol Almin into English words that Avigdor Babbins will khap, tossing Moshiach factoids into the mix!

Maariv is quick because everyone just wants to get to the Farbrengen. Anash are entering the Yeshiva basement Shul™ in droves, warming their hands, preparing their bellies, unclogging their ears. The crowd is Ashkenazi, Sfard, old, young, but mainly the Carlton Kent variety.

Either this Farbrengen is in memory of a Moroccan Sfardi or more likely he tried to lay out his Yahrzeit spread at midday and the Gabboim snuck the bottle to the back & forgot to remove the sticker. The brownies are burnt, the coleslaw overvinegary, the snackers in bags.

No Montréal Farbrengen is complete without an small and incredibly oily Yerushalmi Kugel, sitting next to some other Kugel splattered concoction that looks (and tastes) like it’s made of used cigarettes dunked in engine fluid.

The Farbrengen has begun. Stories of the Mitteler Rebbe are being shared. “The Gvir who spoke at today’s Siyum Sefer Torah is a supporter of Chabad Latino.” – Rabbi Kramer

Rabbi Gurkov is leading the first round of the Farbrengen. He speaks softly, so all the side chatter dies down as everyone leans in to hear. His Yiddish is old school. Not a word of English. “Yud Kislev is the birth of Chassidim. Yud Tes Kislev is our Bris.” – Rabbi Gurkov

Round two goes to Reb Itche Meir Gurarie, the Zahl Yeshiva Mashpia. He speaks powerfully & to the point. Sharply yet gently. “When Chassidim meet they should speak about Yichuda Tata’ah & Yichuda Ila’ah.” Shares a story of an elevator meeting where a guy asked him for the score.

Farbrengen is heating up. Rabbi Berel Mochkin joins the head table. Reb Itche Meir stresses the importance of Gashmius. “Learn the Mitteler Rebbe’s Maamarim. You’ll see why Gashmius can be better than Ruchnius.” As I leave, he wishes everyone Brachos in Gashmius BeHarchava.