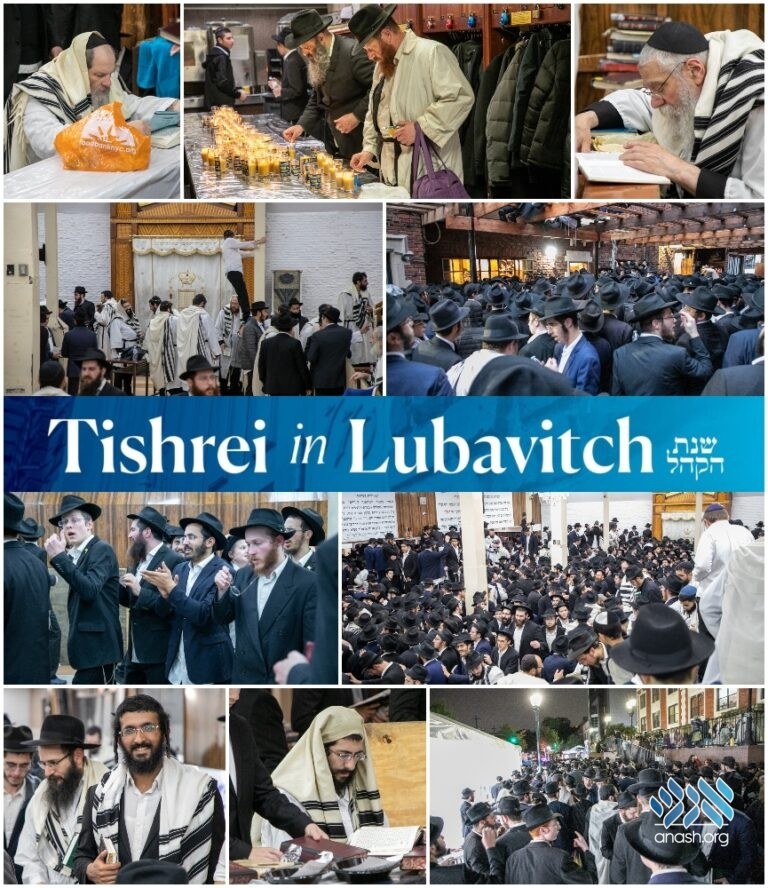 Thousands of anash and bochurim filled 770 over Yom Kippur, starting from a short while before Kol Nidrei and concluding with a joyous dance on Motzei Yom Kippur.

Thousands of anash and bochurim filled 770 for a powerful and impactful Yom Kippur of 5783.

Preperations for Yom Kippur began hours before, with the main shul closed off after shacharis to allow it to be set up for the thousands expected over the coming day.

As before Rosh Hashana, a team worked to bring in tens of benches for those who had purchased seats, including a number of new spaces that were added this year in every nook and cranny. The seats and all the preparations were organized by gabboim R’ Yosef Losh and R’ Zalman Lipsker, and coordinated by R’ Yosef Yitzchok Kratz.

As Yom Tov approached, hundreds of bochurim gathered in the small zal, where the Rebbe would bless the bochurim with birchas habonim, and sang niggunim or learned a bracha given by the Rebbe in that very spot.

At the same time, locals and guests poured into the main zal to prepare for Kol Nidrei, first lighting a yarzeit candle, as is customary, as saying vidui in the final minutes for Yom Kippur began.

Opening the Aron Kodesh for Kol Nidrei and taking out the Sifrei Torah was purchased by R’ Michoel Chaitin for $43,000, and the chazzan for Kol Nidrei and ma’ariv was R’ Aharon Loschak. Ma’ariv was followed by the recital of the entire Tehillim, as the Rebbe established, led by R’ Menachem Gerlitzky.

Shacharis on Yom Kippur morning began at 10:00 AM and was preceded by the singing of Avinu Malkeinu, as were all tefillos of the day. R’ Menachem Amar served as chazzan until hamelech and R’ Zalman Goldstein continued as chazzan for shacharis. The ba’al korei was R’ Michoel Slavin, long time ba’al korei in 770, and chazzan for musaf was R’ Eliyahu Eidelman. During all the tefillos of Yom Kippur, dedicated Hatzalah members stood on hand and ready to help anyone who needed, sacrificing time from their davening to help other Yidden.

Musaf concluded at 3:05 PM, and a break was announced until mincha at 4:45 PM. During the break, tens of minyonim were held for krias hatorah and maftir yonah, with many groups paying a fee (before Yom Tov) to 770 for use of a Torah and then selling maftir yonah one, or many, times.

Maftir Yonah in the main minyan was purchased for $40,000 and chazzan was R’ Mendel Blau. Throughout the day, minyanim were also held for all tefillos in the Rebbe’s room, the small zal, and the Tishrei Tent on the service lane.

Mincha continued straight into neilah, which was led by R’ Aharon Loschak. The zechus of opening the Aron Kodesh for neilah was purchased by R’ Chaim Lechiani for $29,000.

The highlight of Yom Kippur in 770 is at the very end, as thousands shout Shema Yisroel, Baruch Shem and Hashem Hu Ha’Elokim in unison, followed by kaddish, at the conclusion of which the entire crowd bursts into a hearty rendition of Napoleon’s March. The singing continued for so long that neilah only concluded fifteen minutes after the fast was over.

After ma’ariv and havdalla, the entire shul called out ‘gut yom tov’ three times, and began singing V’somachta, with many remaining to dance for an extended period of time, notwithstanding the long day of fasting.

Outside 770, hundreds recited Kiddush Levana, as others broke their fast with juice and cake provided for all by generous donors.

Photos taken before and after Yom Kippur.