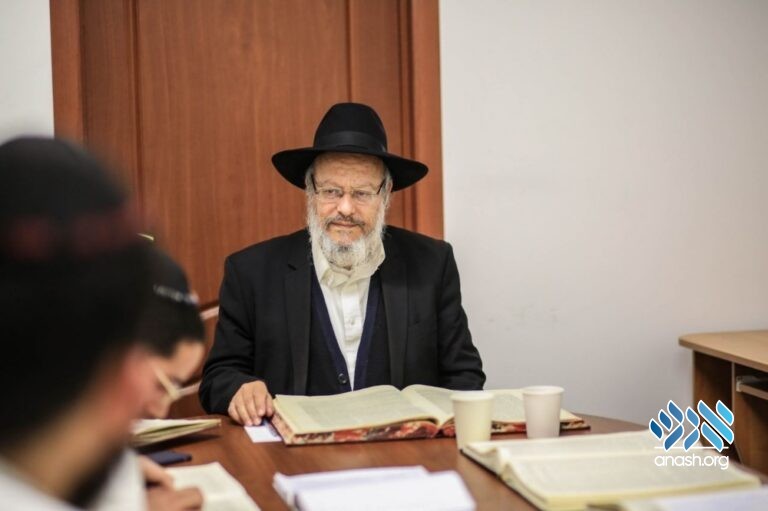 From the Anash.org Inbox: “I’m a kollel wife, a Lubavitcher kollel wife. Yes. And I say it with pride. Forty years ago this was unheard of. But today, that is no longer a novelty, thanks to Rabbi Meir Aharon a”h.”

When Eliyahu Hanavi ascended to heaven in a fiery storm, his student Elisha wailed “Father, father!” in a cry that broke the heavens and his heart. Today, I understand why he cried Father, and not Teacher.

Rav Meir Aharon was a tremendous man, an incredible genius, whose depth and breadth of Torah knowledge is indescribable. He was also the Rosh Kollel for Beit Medrash Halacha UMishpat in Rechovot, Israel. And today, those avreichim are crying “Tatteh!”

I’m a kollel wife, a Lubavitcher kollel wife. Yes. And I say it with pride. Forty years ago this was unheard of. But today, countless avreichim that passed through the kollel have become renowned Rabbonim and Dayanim.

He devoted his life to the avreichim. Raising funds, encouraging them, guiding them, answering all their questions.

He was a man of truth and punctuality. He kept the same schedule for years. Wake up 4:30 AM. 6:00 shiur Chassidus. 6:30 Shacharis. 8:00 AM he would be sitting in Kollel already learning, even though it only opened at 9 AM. And woe to the poor soul who had the misfortune of arriving late. One look from across the room was enough to fill a thousand regrets and a promise to be punctual for eternity.

There was no schmoozing in kollel. No ‘warming the bench’. If they guys would meet on Shabbos they would talk for hours, even though they just spent the week together, because during kollel one would not dare start a conversation that was not related to the halacha they were learning.

It’s a bitter yet comforting that he passed away right before Yud Tes Kislev. That was his day. He would start the farbrengen at 12 in the afternoon and he would farbreng until 1 the next morning. This was the great farbrengen of the year that the entire Chabad community knew about, and many participated. Everyone knew that Yud Tes Kislev was Rav Aharon’s special farbrengen. This is where the avreichim got their ‘buckets filled’ of inspiration for the entire year. With a bottle of ‘Arak’ (Sfardi mashke) he would teach, inspire, and encourage them in their Avodas Hashem.

He also encouraged the women. Many times, when given the opportunity he reminded the kollel wives that we are doing something holy and special, which is easy to forget in the daily grind. He told the women that every hour that their husband is learning Torah is considered their mitzvah as if they sat and learned. On a different occasion, he told the men that their wives work very hard taking care of the kids, and the house, and going out to work, while the husband is just sitting in Kollel. And they better make sure they are spending their time wisely because a lot of sacrifice goes into it. He also told the men to take a day off once in a while to spend quality time with their wife. Even if it means missing a day of kollel, it is very important to invest in shalom bayis.

He encouraged Kollel Shabbatons, where the men would finally get to schmooze and farbreng, and the women can connect and support each other. During one of these shabbatons, he taught a shiur Chassidus in the morning for the women, because also women need learning and inspiration. And then he singled out the Shabbaton organizer’s wife which happened to be me, and expressed tremendous gratitude for letting my husband take time away from helping out to organize the Shabbaton. Nothing was taken for granted.

Five months ago we celebrated the bris of our son. Rav Aharon was very weak already and was barely leaving his house. And yet, when requested to sandek he came, and then spoke, and stayed to say Lchaim. Because for him it was a family simcha, he treated the avreichim like his children.

I cannot do justice to his incredible knowledge and stamina for learning. He was always learning Torah. At every opportunity. It was his entire life. I can just share a few anecdotes because it’s all the little things that make up a great person.

During the past year, he kept on saying, “Next Sunday I’ll be in kollel”. He was undergoing treatment and in pain, but it was just a small obstacle to get through so he can get back to kollel.

So today, the kollel avreichim will start the Yud Tes Kislev farbrengen at 12 PM promptly. They will make Lchaim and farbreng until sunrise. Because that’s what Rav Aharon would do. And they might cry “Tatteh”.