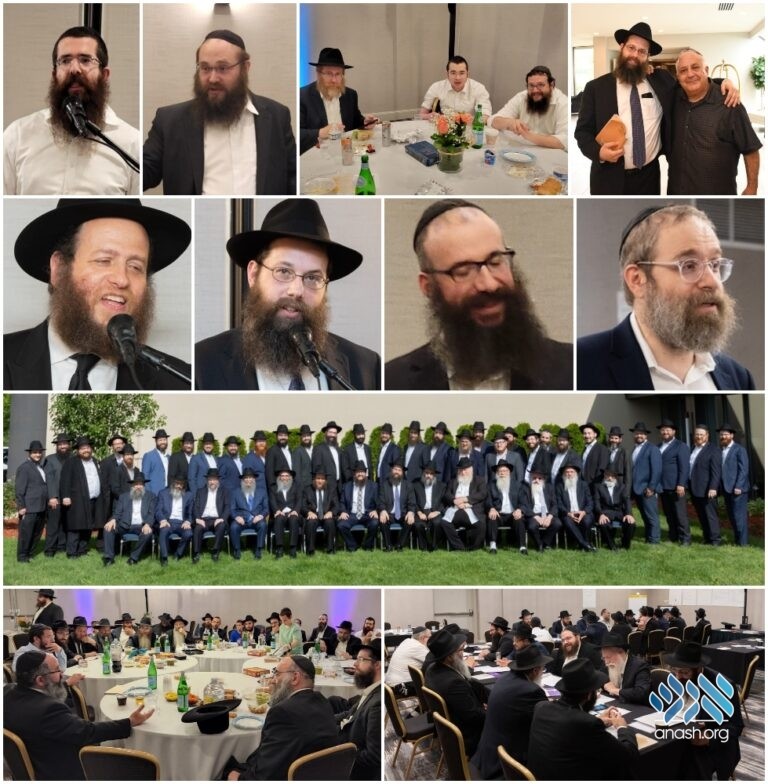 Over 100 shluchim and shluchos from across Ilinois gathered this week for a family Kinus Hashluchim where they trained to deal with supporting community members after a crisis and planned for the upcoming hakhel year.

Over 100 shluchim and shluchos from across Ilinois gathered this week for a family Kinus Hashluchim where they trained to deal with mental health crises and planned for the upcoming hakhel year.

The Kinus was for the shluchim, the shluchos and their children, with separate programs for each. The family kinus, a novelty even as many regional kinusim take place, was in light of the Rebbe’s words regarding the Kinus Hashluchim in Eretz Yisroel in 5743.

On that occasion, the Rebbe addressed the Kinus on Shabbos Chof Av 5743, the day before the kinus would be taking place in Yerushalayim. The Rebbe praised that Kinus that was to include men, women, and children and the Rebbe called on Shluchim around the world to emulate that Kinus and also arrange a Kinus for “anashim, nashim and taf.”

With the kinus taking place just twenty minutes from Highland Park, where this year’s Fourth of July parade ended in a horrific shooting, the kinus had an extra focus on the need to confront the growing mental health crisis Chabad leaders face in their communities.

Like many of their American colleagues, Chabad rabbis and rebbetzins in Illinois have a broad reach, regularly engaging with Jewish youth, college students, young professionals, and adults of all ages. “We’re in constant contact with a broad crowd,” says Rabbi Meir Moscowitz, the regional director of Chabad-Lubavitch of Illinois. “We frequently find ourselves in the position of first responders, so we need the tools to identify when someone needs help.”

Last Sunday and Monday’s regional conference presented an opportunity for Illinois’ Chabad emissaries to unite and focus on combating the mental health crisis. “We wanted to make these resources as accessible as possible,” Rabbi Moscowitz said. Placing a high priority on accessibility meant the organizers provided a program for the entire family. A full children’s program allowed parents to focus on the day’s topic.

In two sessions totaling six hours, licensed instructors Rabbi Chaim Lazaroff and Mrs. Gittel Francis LMSW taught Mental Health First Aid. It’s a course that helps trainees identify when someone is struggling and provides concrete tools to approach, encourage, and support them. “A lot of our work with students is simply counseling them,” says Rabbi Dovid Tiechtel, director of Illini Chabad at the University of Illinois. “Students are now more anxious than ever, especially since Covid.” Even after almost two decades of counseling students, he says the training taught him a great deal and gave structure to what he already knew. For others in the room, it was their first in-depth exposure to these ideas.

The conference program presented the Rebbe’s teachings on mental wellbeing, and Chabad Emissary to Sumy, Ukraine, Rabbi Yechiel Shlomo Levitansky was on hand to lead a farbrengen about the need to balance self-care with care for others. “Rabbi Levitanksy has Chicago roots, and his talk made a deep impression on all of us,” Rabbi Moscowitz says.

Most of the one hundred participants completed the final stage of the course on their own time and received Mental Health First Aid certification. Rabbi Chaim Shanowitz, co-director of Chabad of Deerfield, Illinois, who also leads a CTeen youth chapter, said the conference was indispensable. “We’ve seen many more people struggling due to the events in Highland Park. It’s reassuring that we’re now better able to be there for them,” he said.

Although it’s only been a week since the conference, Rabbi Yosef Moscowitz, executive director of Lubavitch Chabad of Illinois, says the feedback has been “phenomenal”. “Several shluchim from throughout the state reached out with stories of how they implemented the practical skills and the spiritual inspiration the conference gave them.”

Another focus of the kinus was preparing for the upcoming hakhel year, and planning ahead for special gatherings, programs and events that would take place over the year with renewed vigor.

The shluchim and shluchos also joined separate farbrengens, where they were inspired to return to their holy work of bringing Yiddishe neshamos back to their roots.

N’shei Readers: Click here to view a gallery of the shluchos kinus.