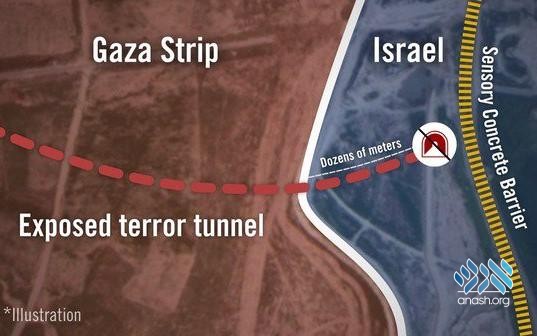 A tunnel dug from within the Gaza strip that entered Israeli territory was discovered by the IDF on Tuesday.

A tunnel dug from within the Gaza strip that entered Israeli territory was discovered by the IDF on Tuesday.

The discovery was made by sensors that make up part of a new barrier being built by Israel. The barrier is expected to be completed within the next six months and consists of a deep underground wall, an above-ground obstacle as well as technological means for locating tunnels.

IDF Spokesperson Brigadier-General Hadi Zilberman announced that the tunnel “did not cross the barrier that is being established these days. [It] was still in the process of being built so at no point did it pose a danger to the surrounding towns. It will be neutralized in the next few days.”

Although the barrier is not yet complete, this is its first successful attempt at locating and blocking an offensive tunnel, the IDF reported.