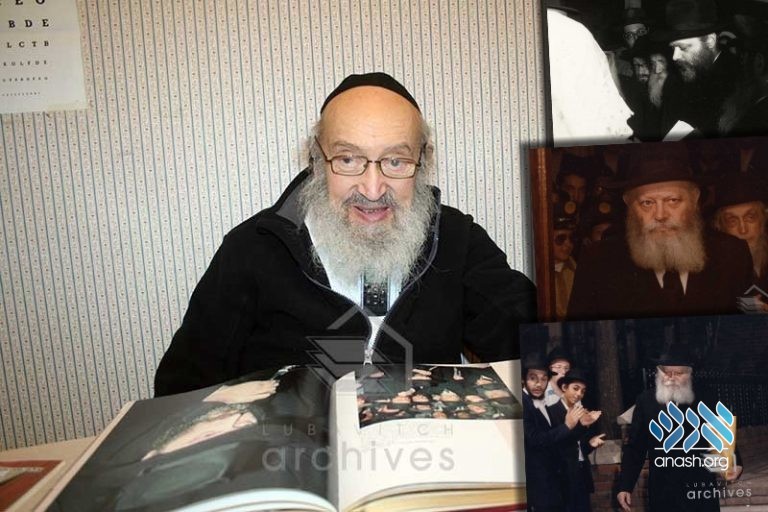 Longtime wedding photographer Heshy (Harry) Trainer, who was one of the first to take photos of the Rebbe and later make them available to the public, passed away today.

Longtime wedding photographer Heshy (Harry) Trainer, 95, was one of the first to take photos of the Rebbe and later make them available to the public.

Today photos of the Rebbe are ubiquitous. It may come as a surprise to some that there was a time when such photos were rare, at the Rebbe’s clear behest. In fact, the Rebbe would deliberately cover his face whenever photographer Harry Trainer tried to take a picture of the Rebbe being mesader kiddushin at a wedding—a fact he found exasperating.

Sitting in his home in 2013, Mr. Trainer discussed how he played an integral role in making pictures of chasidic Rebbes available to the public. It all began with the difficulties he was having taking wedding photos that anyone would want to buy.

Harry Trainer’s career as a photographer began in 1940, when as a student at Yeshiva Torah Vodaath in Brooklyn he won a camera in a raffle. “I would go around the yeshivah taking pictures,” he said. “It was a relatively new thing and no one minded.”

Two years later he began doing it professionally. In fact, he basically cornered the market for frum weddings in the 1940s and ’50s. “In those days you had to use a lot of artificial light in order to take a picture indoors. They didn’t even invent a camera with a flash mounted on it until the early 1940s, so in those years there were no pictures of indoor weddings. For chasan and kallah pictures, if you were more ‘modern’ you went with your fiancée and took pictures in a studio before the chuppah. The frummer ones would go to the studio right after the yichud and then come back to the wedding hall and get on with the show.”

When the first flash camera was invented, Mr. Trainer bought one for five and a half dollars. Shortly thereafter, he realized that he could make things a lot easier for the chasan and kallah and their families because there was no longer a need to rush out to a studio for pictures. His name gradually spread, and pretty soon he was working almost every night.

In the beginning, Trainer would just show up and take pictures; if the photos came out good he would sell them “for eight cents apiece.” If they weren’t good, it was his loss. It was an iffy way to do business. It also placed him at the mercy of the chasidic Rebbes who were officiating or attending as guests and didn’t want their pictures taken. “This was very detrimental to my livelihood. The Satmar Rebbe had prohibited me from taking his picture and the Lubavitcher Rebbe covered his face. Who would want to buy such pictures?”

According to Mr. Trainer, the Rebbe was also not appreciative of being photographed and would cover his face at weddings. In fact, it was only after he complained that it was hurting his livelihood that the Rebbe stopped, although he clearly did not enjoy having his picture taken.

“One time I was at a Lubavitcher wedding at the Gold Manor. I got up and took a picture, but the chasidim kept egging me on to keep going. I snapped another one or two and was about to take a fourth when the Rebbe paused in the middle of his talk and said directly to me, ‘Dacht zich mir az drei iz shoyn genug—I think that three is enough.’ From then on I learned not take more than three pictures.”

At a certain point the Rebbe stopped going to weddings in other locations and would only attend chuppahs in front of 770 Eastern Parkway. “The Rebbe’s secretariat then conveyed to me that one picture taken by the chuppah was enough. It was crucial that I get it right, because if I didn’t it was a great loss to the chasan and kallah.

“This incident is a classic,” he continues with a smile. “One time it was very crowded and someone was standing in the exact place I needed to position myself to be able to get everyone in the photograph. It was jam-packed, and the person refused to move. I told the guy, ‘I have to be in this spot in order to get the picture.’ He wouldn’t budge. So I told him, ‘I have about eight seconds left. If you don’t get out of my way I’m going to have to force myself in.’ He didn’t move so I shoved myself in and he fell down. ‘You paskunyak [troublemaker]!’ he yelled at me. ‘I can tell you one thing: When my daughter gets married, I want you to be the photographer!’” Later, when Trainer complained to the Lubavitcher Rebbe’s aide that one picture wasn’t enough, he was permitted to take three pictures under the chuppah.

Mr. Trainer makes an important distinction: “The Satmar Rebbe said that taking pictures was assur [prohibited], whereas the Lubavitcher Rebbe did not. I think he just didn’t want to have a fuss made over him. He only said something in protest when the flash bulbs were a distraction under the chuppah or in the middle of a discourse.”

After years taking photos, once the digital photography was the new way, he could not compete. “I am old-fashioned,” he said in one interview, “In my days, photography was a real art. You learned how to set yourself up in the right place at the right angle. … Today, the philosophy is like machine gun fire. You just spray bullets all over the place and hope that one of them hits the target. To prepare for a shot, anticipate a winner, and go for it is missing today.”

He said that he gets to see up-close what is happening at a wedding, and he encourages the chassan and kallah not to lose focus. He said that it is his job to focus on good photos, and groom he said, should realize that the day of the wedding is “to prepare himself spiritually for this most important day. … When people mix up their roles, things don’t come out good. That is a lesson that I learned from my years in photography that I think everyone can apply to their own lives.”