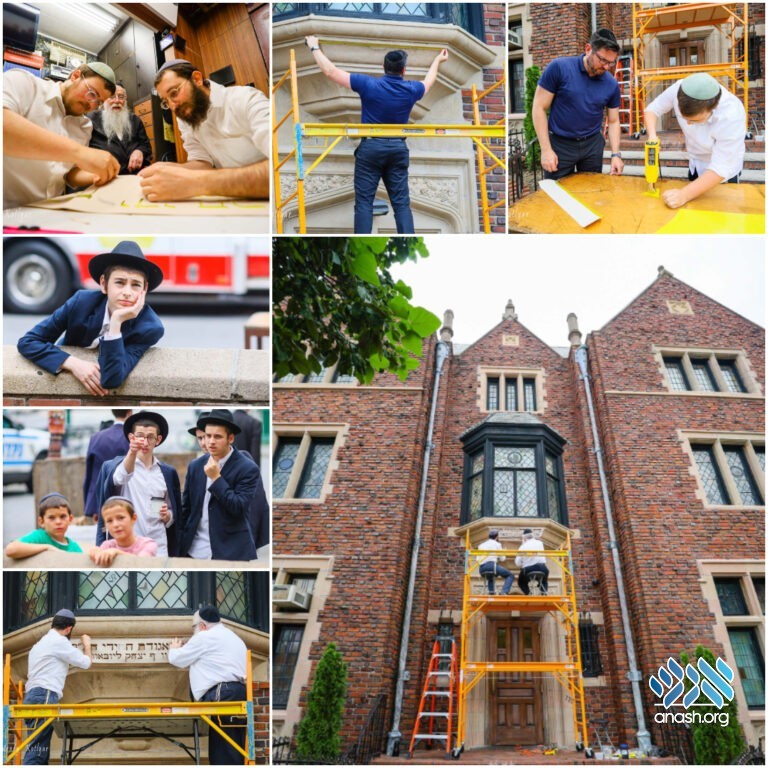 Passers-by stopped to watch the unusual sight of a pair of chassidim perched atop bright orange scaffolding, carefully painting with black paint above 770’s front entrance.

The iconic writing on top of the front entrance to 770 Eastern Parkway, which began fading recently, was professionally repainted on Tuesday.

Passers-by stopped to watch the unusual sight of a pair of chassidim perched atop bright orange scaffolding, carefully painting with black paint above 770’s doorway.

The painted words, which say “Beis Agudas Chassidei Chabad – Ohel Yossef Yitzchok Lubavitch” in both Hebrew and English, were added on the Rebbe’s request during the seforim court case in 5745. They were repainted a number of times since.

A number of weeks ago, the exterior of 770 was cleaned by a high-power washer, which caused some of the letters to fade. A team arrived last Tuesday to completely remove the remaining paint, using cleaning solutions to totally erase the fading letters.

After waiting a week to allow time for the cleaning solutions to properly absorb, the words were repainted on Tuesday.

The work was sponsored and overseen by Rabbi Levi Sudak, Rabbi Chaim Baruch Halberstam of Bedek Habayis 770, Shmuly Jacobson (son of R’ Sholom Jacobson A”H who was active in the original inscription), and Ari Lichtman.