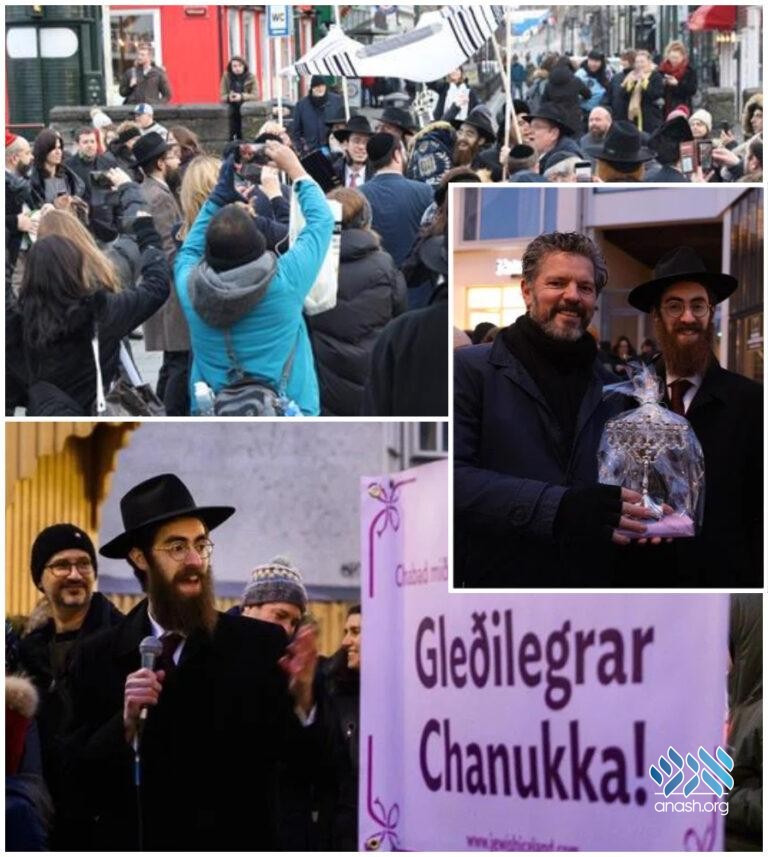 For the first time in its millenium-long history, Iceland has formally recognized Judaism as a religion. Shliach to Reykjavík Rabbi Avi Feldman says “People here are very excited, it’s a reflection of the reality for Jewish life here in Iceland.”

For the first time in its millenium-long history, Iceland has formally recognized Judaism as a religion. The year-long process, during which the country’s rabbi, local Jewish community members and an Icelandic attorney elucidated the Jewish religion and practices for government officials, finally paid off when it was approved on March 8.

It’s a historic step for the Land of Fire and Ice, and comes as the country’s Jews prepare to join their brethren the world over in celebration of Passover.

“For Iceland to formally recognize the world’s oldest religion is in itself very significant,” says Rabbi Avi Feldman, who together with his wife, Mushky, established Chabad-Lubavitch of Iceland in 2018, and serves as the island nation’s lone rabbi.

Some 80 percent of Icelanders legally affiliate with a religious denomination, a process that happens automatically at birth and from which they can choose to opt out. They also pay a church tax (sóknargjald), which the government directs to help support their registered religion, or, in the case of no religion, the University of Iceland. For the first time in history, Iceland’s Jews will have the choice to register as such and direct their taxes to their own religion. Among other benefits, the recognition will also allow Jewish marriage, baby-naming and funeral ceremonies to be civilly recognized. Theoretically, it can also provide for a land grant for the Jewish community in the future.

More than anything else, however, the recognition marks a coming of age for Iceland’s tiny but active—and growing—community.

“People here are very excited by this development,” says Rabbi Feldman. “It’s not just a formality; it’s a reflection of the reality for Jewish life here in Iceland.”

Julian Burgos, a marine biologist who’s been working and living in Iceland for the past 12 years, agrees. “This is significant,” he tells Chabad.org. “We’re now an official part of Iceland’s diverse societal fabric.”

Burgos, an active participant in Jewish communal life in Iceland, explains that until the 20th century Iceland was a small, distant country, with little immigration. “After World War II Jews began coming here in small numbers,” he notes, “but it was always a small community. Nowadays, 10 percent of the population is from abroad; it’s important for the state to support this diversity, and it’s nice to be a part of it.”

Mushky Feldman agrees: “This step gives each individual a sense of belonging and a connection to Judaism in Iceland.”

The Feldmans and local Jews worked hand in hand with Páll Arnór Pálsson, a local lawyer and Israel’s honorary consul, to see the application process through.

“We never had an official Jewish community before,” notes Pálsson, whose family has been in Iceland ever since Nordic settlement began. While Jews have called the island nation home for decades, he says “this is a historic development for Iceland.”

A Nation Gets Its First Rabbi

Until 2018, Iceland’s small Jewish community didn’t have a rabbi or permanent synagogue. That all changed when the Feldmans arrived as Chabad emissaries and established Chabad of Iceland in the capital of Reykjavík. In the years since, the dynamic couple has successfully built on the impressive decades-long grassroots efforts of local community members, as well as the early work of Chabad’s “Roving Rabbis,” dispatched to the island by Chabad-Lubavitch headquarters since 2011 to provide support and rabbinic guidance to the remote community.

For decades, Iceland’s Jews, while active, struggled to attain formal recognition of their community, which is granted by the government to religious communities. Over the years, various Jewish lay leaders attempted to get recognized, to no avail.

“When we moved to Iceland, we knew that recognition was important to our community, and we were determined to make it happen,” Rabbi Avi Feldman tells Chabad.org. “This is a story decades in the making.”

Finally, their efforts have paid off with the Icelandic government acknowledging the growing community this month.

“This is both a small step and a large stride for our community,” says Mike Levin, who has lived in Iceland for more than three decades. “A small step because not much has really changed. Our community has been slowly growing, new members add to a core of people, some of whom have been here quite some time. A large stride because this is the first time Judaism will be a recognized religion within Iceland.”

When the Feldmans first arrived, only 100 or so Jews were known to be living on the island, although the rabbi and his wife were sure there were more. Their hunch has proven correct.

“We meet local Jews whom we didn’t know previously every single week,” attests the rabbi, now placing Iceland’s actual Jewish population north of 300 full-time residents. While most live in Reykjavík—home to approximately two-thirds of Iceland’s population of 350,000—they have connected with Jews in Akureyri, Iceland’s second-largest city (pop. 19,000), and as remote as West Fjord (pop. 7,000) and even tinier fishing villages in between.

Up until the pandemic started, local Jewish life was regularly bolstered by Iceland’s active tourism industry, with Chabad’s Shabbat programs attracting Jews from all walks of life. During the busy summer season, as many as 150 Jews would attend Shabbat experiences hosted by Chabad in rented hotel spaces in the city center. One American Jewish couple even got married after meeting over kiddush at Chabad of Iceland.

All of that changed with the pandemic last March, but the Feldmans have used the altered circumstances to focus inward, deepening existing relationships and working to connect with even more Jews spread across Iceland.

Feldman sees the formal recognition as opening up even more new opportunities for the community. “It will help Jewish life here grow and become even more active,” he says.

In the short time that they’ve been living in Reykjavík, the Feldmans have invigorated the community with their enthusiasm and charm. From regular Torah classes to Shabbat services and womens’ events, they’ve brought the gamut of Jewish community programming to Iceland.

In January of 2020, just before the pandemic began, Iceland’s Jews held the country’s first Holocaust memorial to mark 75 years since the liberation of the Nazi’s Auschwitz death camp. A month later, they celebrated the completion of the community’s very first Torah scroll, with spirited dancing through the streets of Reykjavík accompanying the scroll to its new home. Today, a giant Chanukah menorah goes up on Laugavegur in the city center, and as Passover approaches, the Feldmans are busy giving out hand-baked shmurah matzah.

“The Jewish people of Iceland have waited a long time for this to happen,” says Mushky Feldman. “The determination of the people in the community to get this done is really impressive. We owe a huge ‘thank you’ to Páll and all those who made this possible. There’s a bright future for Jews under the Northern Lights.”