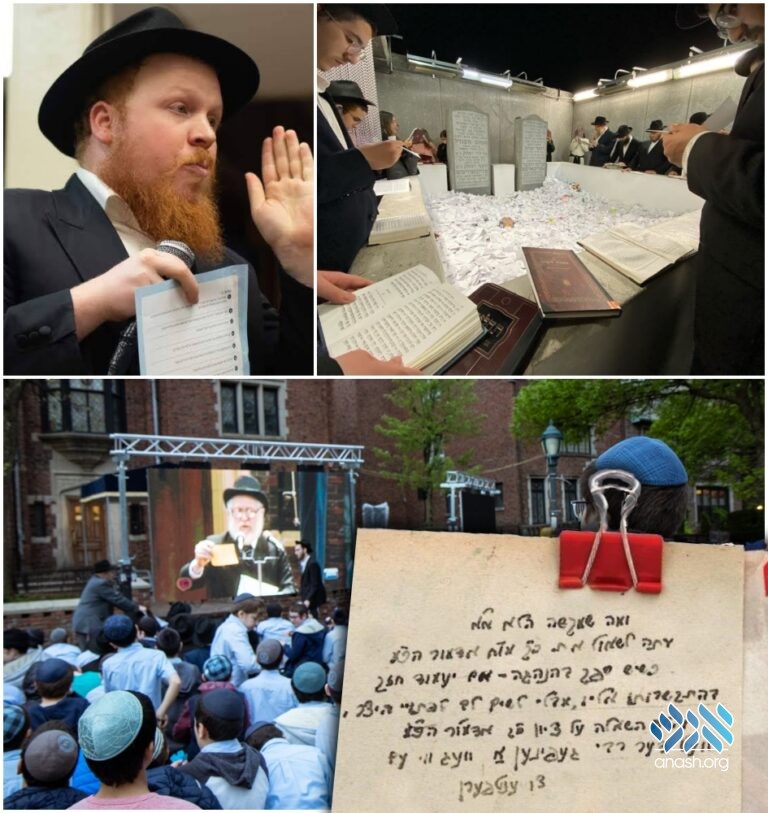 After months of planning, it looked like the grand Connection Point rally for Lag B’omer would not be possible with the heavy rains expected. But after Rabbi Levi Plotkin davened by the Rebbe’s Ohel, the rain held up until after the program’s conclusion.

Three years ago we launched “Connection Point,” a project of JEM in collaboration with Tzivos Hashem and I have the great merit of running this program successfully ever since its inception.

Throughout the nesius, and especially after the establishment of Tzivos Hashem, the Rebbe spent hundreds of hours speaking directly to children, guiding them in their avodas Hashem and in preparing the world for Moshiach.

Connection Point is a program for schools that helps children watch and understand Sichos directly from the Rebbe, giving them the tools, as well as motivation and excitement, to experience and understand these sichos.

Several times a year JEM prepares a video of a full rally with the Rebbe and to date over 4,000 Lubavitcher boys and girls throughout the world participate in this tremendous program. For 3 weeks the children watch segments of the sichos culminating in a grand viewing of the entire rally.

Since there are multiple schools in Crown Heights that participate in the program we arrange the grand viewing for them in or in front of 770. On a day that the Rebbe would traditionally have a rally for children, such as Chanukah or Lag B’omer, local children who excelled in the 3 smaller viewings gather in 770 or on the service lane of Eastern Parkway and watch the Rebbe’s sicha together, in the actual place where it happened.

This past year we organized a Real Rally for Lag B’omer to be held on Thursday evening on the service lane in front of 770. Since I recently moved on shlichus to Florida to run CKids Gan Israel – a new overnight camp for non-frum children – I was coordinating the preparations with the JEM team and the local mosdos remotely, and a week before Lag B’omer we still had not found a sponsor to cover the expenses of the event.

I wrote a letter to the Rebbe asking for a bracha that we find a sponsor, and minutes after faxing my letter to the Ohel, Reb Osher Karnowsky confirmed that he will sponsor the entire event in memory of his son Shmuel ע“ה.

With the financials squared away, I was able to focus all my energy into ensuring the event was a major success, but a major question that dominated the various Zoom prep meetings was about the weather. The forecasts showed that there would be a thunderstorm throughout Thursday and especially in the evening. Gathering children outdoors in the rain is never a good idea, in addition to the entire concept of Connection Point being impossible to carry out if the children were not able to concentrate on the sichos and write notes, etc. We decided to move forward with the preparations regardless, hoping for the best.

Thursday morning I flew into New York for the rally and as I landed, the overcast skies and the grim forecast did not bode well.

I went to the Ohel from the airport and wrote a brief but urgent letter to the Rebbe asking for a bracha that the rain should hold up and that the rally should be a success. With confidence, I drove to Crown Heights and joined Rabbi Chaim Loschak, who coordinated the entire program on the ground, with the final preparations for the rally.

Towards evening, boys and girls from all the mosdos descended onto the service lane, filling the 1,000 seats we had prepared for them, despite the overcast sky and the real possibility of a significant downpour.

At the appointed time, the screens lit up with images of the Lag B’Omer parade of 5744 and the Rebbe’s voice could be heard all along the parkway speaking to the children about Rabbi Akiva and Rabbi Shimon ben Yochai. It was such a mechayeh to see so many children listening intently to the Rebbe.

By a miracle of miracles, a slight drizzle began in the last minute of the program and after the service lane emptied the skies opened up with a massive rainstorm.

This column originally appeared in this month’s Derher magazine.

Join thousands of Chassidim who strengthen their Hiskashrus with the Derher magazine each month!
Click here to start receiving your copy today.