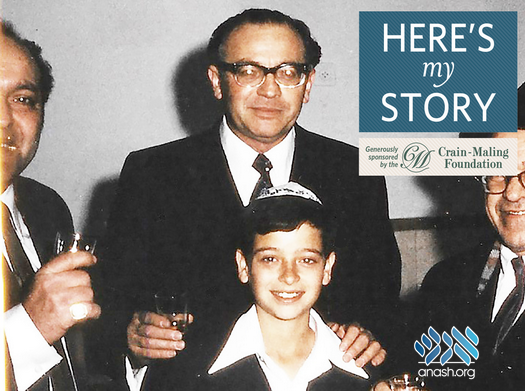 My family’s connection with the Rebbe began in 1971 when my father, Tzvi Caspi, worked for Israel’s foreign service in New York and the President, Zalman Shazar, came to the United States. Mr. Shazar – who was born in Russia to a Lubavitch family – wanted to visit the Rebbe, and my father was given the task of making the arrangements.

I was ten years old at the time, and I remember the president’s visit very well. As he was leaving, Mr. Shazar told my father, “You know, the protocol is that when the leader of a country travels to another country, his first visit is to the leader of the hosting country. I am visiting our leader, and that’s why my first visit was to the Rebbe.”

From that point on, a strong connection developed between my father and the Rebbe. They met many times, engaging in very intense conversations which lasted well into the night.

For Simchat Torah of 1971, the Rebbe invited a large group of Israeli diplomats and dignitaries to participate in the dancing with the Torah at 770 Eastern Parkway in Brooklyn. My father was very happy to organize this, and he also brought me along.

I vividly recall the dense crowd, the noise and commotion, and looking down from a high platform at the restless sea of black hats. And then, suddenly, the room fell silent. You could hear a pin drop. And the sea of hats split down the middle as if by magic, forming a path through which the Rebbe entered. I watched astounded – this was my first encounter with the phenomenon called Chabad-Lubavitch – marveling at the special connection the Rebbe had with his chasidim.

At a certain point during the night, my father introduced me to the Rebbe, who asked me to recite one of the verses of the Hakafot service out loud, for all the room to hear. I remember the verse: “G-d is king, G-d was king, G-d will be king for ever and ever.” Afterwards the Rebbe congratulated me on a job well done, adding, “I didn’t know if you were going to succeed, so I gave you an easy verse.”

This was my first encounter with the Rebbe.

The following year, the Rebbe again invited the diplomats for Simchat Torah, and this time I knew what to expect. And again, the Rebbe honored me to recite a verse; this time it was: “May the glory of G-d last forever; may G-d find delight in His works.” Afterwards, the Rebbe told me, “I remember that last year you did well, so I gave you a more difficult verse this time!”

My third encounter with the Rebbe occurred half a year later, when our three-year mission in New York ended and we were about to return to Israel. I was twelve years old at the time, and my father wanted me to get a blessing from the Rebbe for my upcoming bar mitzvah. And this is how I was privileged to meet with the Rebbe again.

This time the meeting took place in the Rebbe’s office. The Rebbe asked me how I was preparing for the Bar Mitzvah, and I told the Rebbe that I was learning Parshat Shemot, the first portion in the Book of Exodus, which I hoped to read by myself from the Torah scroll.

“Ah, Parshat Shemot,” the Rebbe said, “that is a very important portion. It opens with the beginning of exile, but immediately it describes the seeds of redemption. It tells us the story of Moshe Rabbeinu and mentions how the Jews turned to G-d, and He heard their prayer. The process that began then eventually led to their redemption from slavery, the exodus from Egypt and the giving of the Torah at Mount Sinai.”

The Rebbe spoke with me in Hebrew mixed with some Yiddish, which I didn’t always understand. At the end of the meeting the Rebbe shook my hand and said to me in Hebrew, “Brachah v’hatzlachah – Blessing and success,” and then he added in Yiddish “Zei gezunt un shtark – Be healthy and strong.” I wasn’t completely sure what this meant, so I turned to my father and asked, “Abba, is the Rebbe blessing me that I should be healthy? I’m not sick.” The Rebbe heard my question and clarified in Hebrew, “I am blessing you with robust health.”

Nearly forty years later, I came to understand what the Rebbe meant. I began experiencing severe problems with my spine which worsened until I was paralyzed. I was unable to walk and was confined to a wheelchair.

Searching for a cure, I found a hospital in the United States – the Cleveland Clinic – where the doctors used a new treatment to slowly enable me to walk again on my own.

During my recovery, my physiotherapist took me out to a basketball court. It was difficult and painful for me to move, yet here I was being asked to play ball. The physiotherapist threw the ball to me, and I managed to catch it with my hands.

It was a feat for me, and I was overcome with emotion. So much so that I started trembling. At that moment I saw, before my eyes, the Rebbe’s kind and understanding face, and I remembered him saying to me “Be healthy and strong … I am blessing you with robust health.”

Thank G-d, I was able to return to Israel and recover completely. That is how I merited to see the Rebbe’s blessing fulfilled.

Mr. Hanan Caspi is the CEO of a high-tech company in Rosh Pina, Israel. He was interviewed in his home in Yokneam Illit in November of 2014.