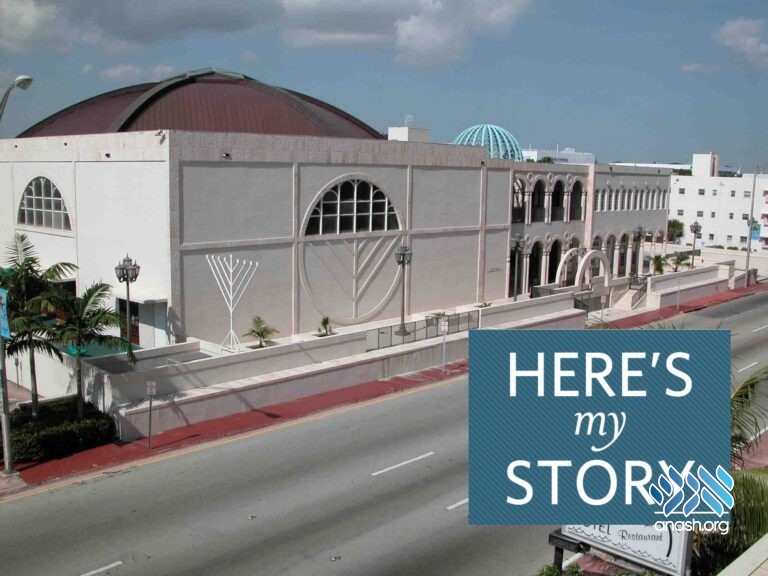 When Mrs. Chani Lipskar was set to move on Shlichus to Miami, Florida, she shared with the Rebbe her unease about leaving her family and friends. The Rebbe’s reply became a motto that she keeps in her mind till today.

Mrs. Chani Lipskar has served as a Chabad emissary in Miami since 1969. She was interviewed in her home in October of 2021.

Our family arrived from Russia to France in 1947, and I was born the year after, the second of five children. When I was six, we emigrated to Crown Heights, in Brooklyn, to be with the Rebbe.

I loved life in Crown Heights and attending school there each day. The highlight of every week was attending synagogue on Shabbat, and when there was a farbrengen with the Rebbe, I and other girls my age would stay for the duration. While we may not have understood everything, we sat for hours, observing, listening, and absorbing the Rebbe’s energy, words, and wisdom.

Upon graduation, my mother very much wanted me to visit her parents, who still resided in Paris, serving as the Rebbe’s emissaries. However, my father was not excited about the prospect of a 17-year-old girl traveling so far away on her own. So we consulted the Rebbe and he gave me his blessing for the trip, on the condition that it included a stint at the Chabad girls’ school in Yerres, just outside of Paris. I began brushing up on my French, with a Berlitz language crash course.

My trip to France ended up being transformational. As it was summer, the school was running a camp for girls, and while there, I quickly came to realize that I was living as quite a privileged American girl, in a very protective environment. My family didn’t lead a luxurious life, but some of the girls in Yerres were the children of Holocaust survivors, or from broken homes, with so much pain and suffering in their lives – and still they were smiling. Just being around them was humbling. They taught me what was truly important in life, and they helped me gain a broader perspective. That summer, I grew up.

Shortly after returning to Crown Heights, there was an event for women held in 770 where I had the opportunity to speak with the Rebbe. “I want to thank the Rebbe for recommending that I spend time in Yerres,” I said. “I benefited so much from the experience.”

The Rebbe smiled his amazing smile and replied, “I’m sure that they benefited from you as well.”

Then I made a request, “I would like to ask the Rebbe for a blessing for my grandfather, Reb Yosef Yehuda Chein.”

“And what is his mother’s name?” the Rebbe inquired. To my great embarrassment, I was at a loss: At that moment, I forgot my great-grandmother’s name!

“You should remember,” the Rebbe said, gently. “Her name was Rivka Dina; the same as your mother’s name.” The fact that he knew my family so well gave me a sense of having a very personal connection with him, and his beautiful, warm smile put me at ease.

A few years later, I was married and teaching in Crown Heights while my husband studied Torah full time. We had hoped to continue this arrangement but, after about a year, the Rebbe told us to start looking for a position in the field of Jewish outreach – as his emissaries.

Word got out, and several such opportunities were proposed to us. We prepared to present them to the Rebbe at our next private audience. My husband, Rabbi Sholom Ber Lipskar, was twenty-two at the time and I was twenty years old, and we were facing a monumental decision: Where would we be spending the rest of our lives?

Before our audience with the Rebbe, my husband of one year told me: “Chan, listen, I know you like to talk, but when we stand in front of the Rebbe, we just have to listen and accept what he says, without comment. A chasid is supposed to be a soldier.”

Before our meeting, we stopped at my parents’ home and I confided to my mother, “Ma, I’m so nervous.”

“What’s there to be nervous about?” she reassured me. “You’re going to the Rebbe; he is a Rebbe but he’s also a father. If you feel that you need to express yourself, then tell him whatever is on your heart. Say exactly how you feel.”

I was getting mixed messages but decided to listen to my husband. We entered the Rebbe’s room and put our note down on his desk. My husband was as white as a sheet.

The Rebbe carefully read our note, and then looked up with his answer. He directed us to go to Miami Beach: My husband would serve as the principal of the local Chabad school and I would be a teacher.

Oh my gosh! Miami? I felt the blood rush from my face. Today, Miami is a bastion of thriving Jewish life, but back then it seemed like a spiritual vacuum.

“Rebbe,” I said, without realizing that I was now talking, “I want to go and do this shlichus, but I don’t know if I’ll be able to live up to the task of representing the Rebbe. And it’s going to be hard for me to leave my family, friends, and community. I don’t know if I can do it.”

My husband was probably none too happy with my little outburst, but what was he going to do?

The Rebbe sat up straight in his chair and outstretched his hand. “I am going along with you,” he declared with an expansive gesture. “But,” he added, “it should be with joy.”

His smile lit up the room and lit up our lives. The Rebbe’s words became a motto that we kept in our minds and hearts from then on: Hearing that the Rebbe would be with us and that he believed in us was so uplifting. There was no longer any question whether we’d be successful.

We arrived in Miami in 1969, and shortly after began cultivating a community around the school. After twelve years, we were approached about a project in nearby Bal Harbour. There wasn’t any visible Jewish life there at the time, but when a developer named Mr. Sam Greenberg began planning a large building in the area, the Rebbe had advised him that he would need a synagogue too. Now he was asking us to pilot it, and the Rebbe gave his blessings for success. “It’s the right thing to do,” he told us.

By then we had two young children and Bal Harbour was predominantly a retirement community with beautiful beaches, shops, and visitors – and very few young people. Despite my reservations, with the Rebbe’s words in mind, we forged forward.

The locals weren’t very welcoming. “Go back to Israel! Who needs you here?” people would yell at us in the street. “We can’t play with you,” our children would hear. “Our father doesn’t like Jews!”

So, it was no land of milk and honey. But with Hashem’s help, the Rebbe’s blessings, and a great team of fellow Chabad emissaries, our community continues to grow exponentially. Since the Rebbe was never satisfied with the status quo, our work is never done. We keep on striving to accomplish our mission, and to impart a sense of Jewish pride to every Jew in our zip code.

Despite the pitfalls and challenges – when it came to supporting ourselves, having children, health issues, and much else – we never felt dejected, and never felt alone. We knew that we had the Rebbe’s promise: “I am going along with you, but it should be with joy.”