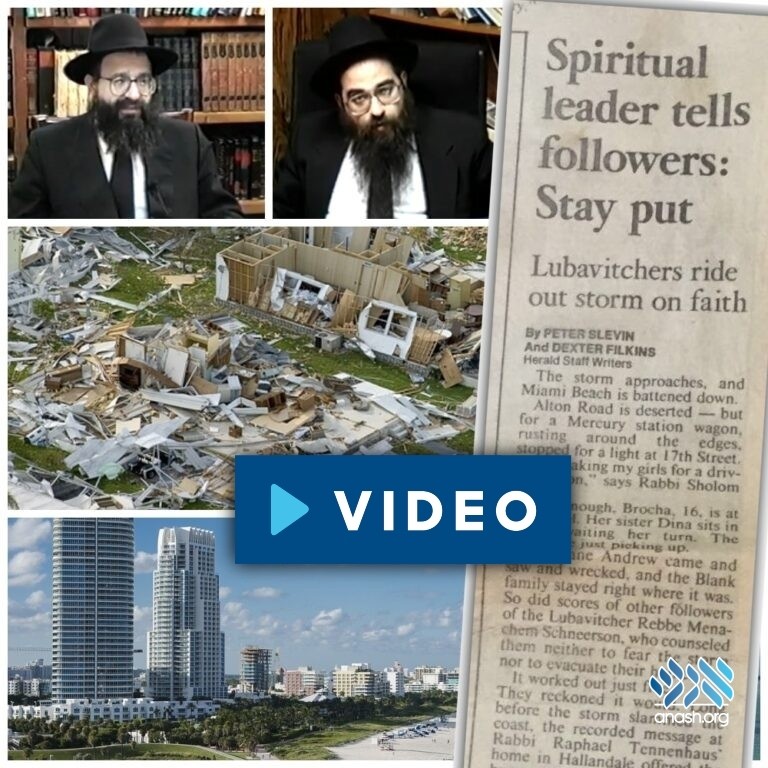 30 years ago, as a category 5 hurricane was barreling toward Miami Beach threatening to decimate the city, Chassidim worldwide witnessed open miracles from the Rebbe, strengthening their faith during those tumultuous times.

Chassidim all over the world commemorated 30 years since the amazing miracles associated with Hurricane Andrew, which experts predicted would have killed tens of thousands of people.

Over 100 people said L’Chaim at 3 separate breakfast Farbrengens this morning in Congregation Levi Yitzchok-Lubavitch in Hallandale Beach to commemorate a day that brought tremendous Chizuk to Chassidim all over the world.

On Sunday morning, 24 Menachem Av 5752, the eye of the Category 5 storm was heading to the Dade/Broward line, where we are situated.

I called Rabbi Avrohom Korf, the Head Shliach of the State of Florida, and I asked him if he will call the Rebbe.

Rabbi Korf hesitated and suggested that I make the call. This was six months after the Rebbe suffered a stroke at the Ohel on 27 Adar 1, 5752.

I called the Rebbe’s office at 8 am. The Mazkir Rabbi Leibel Groner z”l answered, and I told him the details, including the fact that a good part of South Florida was being asked to evacuate.

Rabbi Groner told me that he cannot say for sure if he will get an answer. One hour later, at 9 am, Rabbi Groner called, and said that the Rebbe was emphatic that we stay put.

A bit later, Rabbi Leibel Schapiro, from Miami Beach called, to inquire if the answer about not evacuating applies to Miami Beach as well.  Once again, the Rebbe was emphatic not to evacuate.

A third inquiry was soon made by Rabbi Raphy Solomon, living in Sunny Isles (in between Hallandale Beach and Miami Beach) if the instruction to stay put applies to that area as well. Sure enough, the Rebbe was insistent that he too remains and not evacuate.

Thousands in South Florida can retell the wondrous miracles from their perspective. Personally, I never let 25 Menachem Av go by without saying L’Chaim, usually in my Synagogue in the atmosphere of a Chassidishe Farbrengen.

The storm was the most powerful I have ever witnessed in my 40 years on Shlichus in South Broward.

The “experts” later said, that one of the errors in their horrific predictions, was that the storm was a dry storm, not a wet storm, as they had anticipated.

Chassidim knew, without a doubt, that we merited an open big miracle, predicted by the Rebbe.

Many years later, the Ish HaChesed Reb Yingy Bistrisky, told me at a wedding, that he was in the Rebbe’s room (as a dedicated member of Hatzalah) when the information was first brought to the Rebbe.

“Rabbi Groner asked the Rebbe regarding your 8 am request that Sunday morning in 5 different ways, whether to evacuate or whether to stay. Each of the 5 times, in both the positive and the negative, the Rebbe nodded strongly, and was adamant to stay and not evacuate”.

This open miracle of the Rebbe, was an inspiration to tens of thousands of Chassidim at the time, and it is celebrated every year with great enthusiasm.

The media picked up the story all around the world, including New York Newsday, which quoted how I remarked, “our sign, ‘Torah in Action’ stayed up. It didn’t get knocked over by the 150 MPH winds. The sign of the bank next door came crashing to the ground. It’s a reminder that money comes and goes. Torah lasts forever!”

May we merit big miracles in our current situation, both regarding the Pandemic and social unrest, with the revelation of Moshiach, NOW!