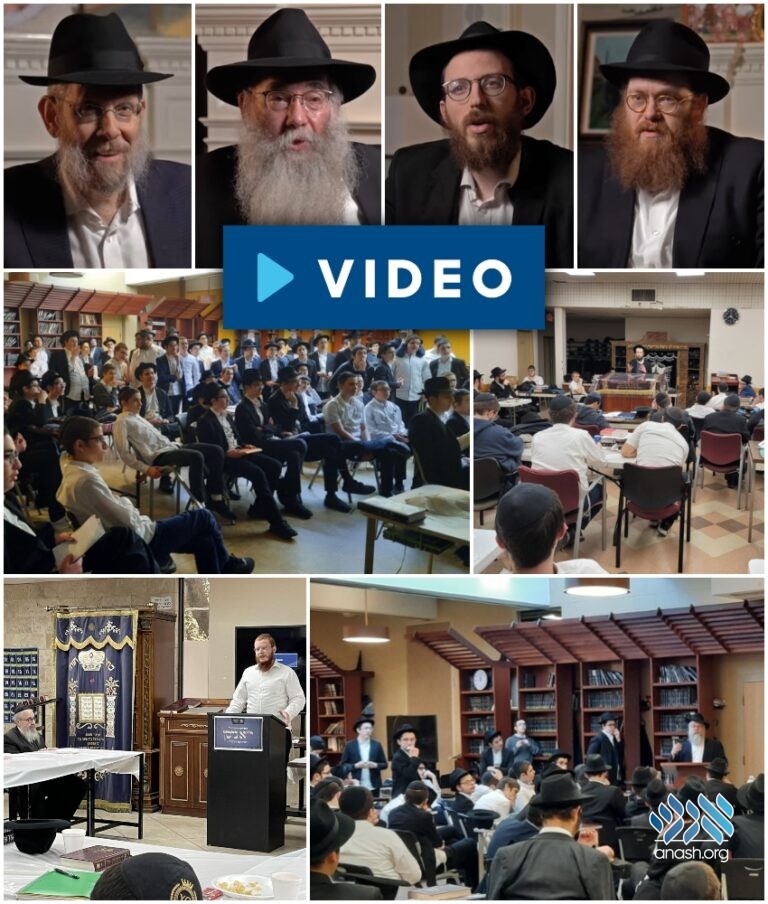 Kinusim were held in 30 Yeshivos encouraging Bochurim to take on personal gifts for Yud-Aleph Nissan. A video featuring 4 mashpi’im explained what it means to give the Rebbe a gift, what types of gifts the Rebbe wants from us.

Over the past week, 30 Yeshivos across America held a special kinus to launch their personal preparations, as well as a worldwide matanos initiative for the Rebbe’s 120th birthday.

After playing an exclusive film produced for these Kinusim, the Bochurim were addressed by their Mashpi’im and Hanhola members on the importance of preparing a gift appropriate for Yud-Aleph Nissan, especially as we celebrate the 120 Years milestone.

One Mashpia spoke about an answer of the Rebbe featured recently in the weekly Mein Tog publication:

The Rebbe’s Mazkir Rabbi Binyomin Klein once wrote to the Rebbe about a group of Talmidim Hashluchim who were scheduled to fly to Australia shortly before Yud-Aleph Nissan.

“What is the reason and pleasure to travel from here a few days before Yud-Aleph Nissan?”

The Mashpia went on to explain the importance of being by the Rebbe for Yud-Aleph Nissan, as well as the Rebbe’s appreciation for Chassidim who would travel to be with him for these special days.

The Talmidim Hashluchim in each Yeshiva explained to the Bochurim how they can qualify to receive money towards their flights to the Rebbe for Yud-Aleph Nissan and announced the program that will take place in New York for the week leading up to this special day.

In addition to the personal Matanos from each individual Bochur, many Yeshivos are coming together with collective Matanos in Limud HaTorah between both the Bochurim and the Hanhola.

“Although I always heard from Mashpi’im and teachers about the importance of presenting the Rebbe a personal gift for Yud-Aleph Nissan, it was not until this year that I really understood and appreciated this idea.” related S.D. of the Brazil Mesivta, “I am very excited to celebrate Yud-Aleph Nissan in New York for the first time,” he finished.

The Matanos promo video titled “What can I do for 11 Nissan – 120 Years?” featuring Rabbis Sholom Dovid Geisinsky, Shmuly Avtzon, Mendy Mochkin, and Mendel Wolosow, taught the Bochurim what it means to give the Rebbe a gift, what types of gifts the Rebbe wants from us, and the importance of spending this day in the Rebbe’s presence.