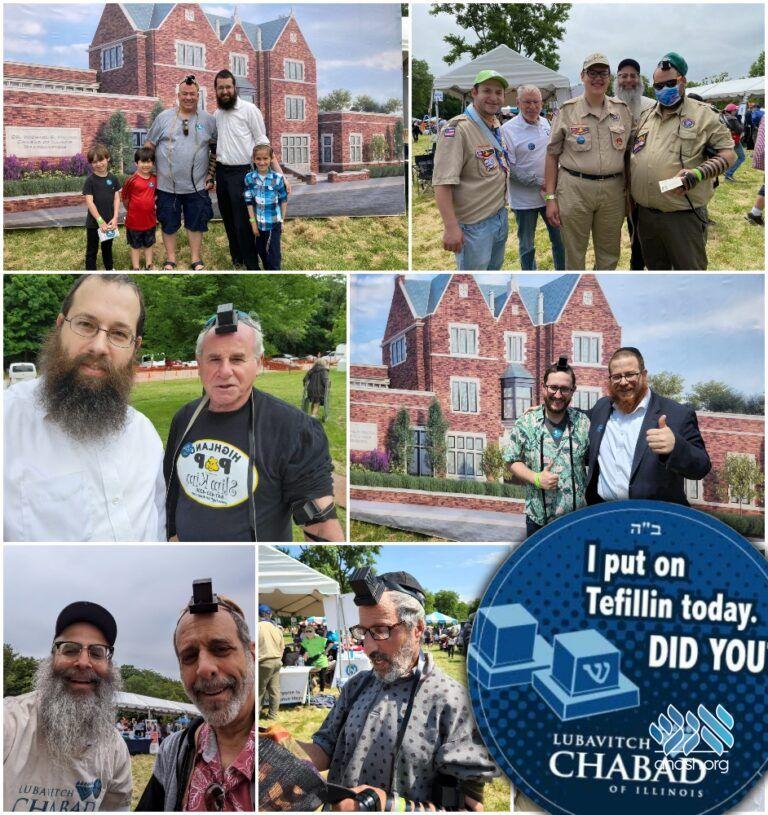 After a four year hiatus, the Jewish Folk Arts Festival in Chicago resumed, and Chabad was on hand to bring authentic Judaism to the Jewish festival. A 20 foot mural of the new Chabad Illinois Headquarters was also displayed.

It was a beautiful day for a fair and for celebrating being Jewish and your Jewish community.

For more than forty years Chicago has hosted a Jewish Folk Arts Festival; a semi-annual event designed to bring any and all Jewish organizations and entertainers out into the forest preserve for a day of music, kosher food, information and celebration. Since the festival’s inception, Lubavitch Chabad of Illinois has had an active Mivtzoim stand at the festival.

Armed with tefillin, neshek, Know-your-Jewish-Birthday certificate and other mivtzoim resources, Chabad was there to offer everyone the centrality of being Jewish; Mitzvah opportunities to Jews in the Forest Preserve to celebrate their Jewish identity!

This year’s booth had the added touch of a complete 20-foot mural depicting the new Michael S. Maling Chabad of Illinois headquarters being built in replica of 770.

Rabbi Baruch Epstein of Lubavitch Chabad of Illinois and Cong Bais Menachem arrived half an hour early to set up the tefillin stand and brochure distribution. They didn’t wait for the community to arrive, they began with their fellow organizational participants and started to put on Tefillin with Jewish boy scout leaders, Jewish funeral home directors, “Spend a Year in Israel” campaigners, Challa Cover design merchants and then the crowd started to pour in.

“The weather was beautiful and after a four-year hiatus due to Covid the people were thrilled to be there,” explained Rabbi Epstein, “I was wrapping tefillin with one man and asking another to do the same as a third put on tefillin and his wife took a neshek package all while I was looking up their daughter’s Jewish birthday and filling out the birthday certificate and explaining the Rebbe’s birthday awareness campaign and showing people where the food court was!”

Fortunately, more shluchim, anash and bachurim joined the team and went out looking for more people to do more mitzvahs. Everyone who put on tefillin got an “I put on tefillin today; did you?” sticker, which acted as a free pass for the rest of the day allowing them to move about the festival without being stopped and asked again!

Rabbi Zelik Moscowitz, director of the Stuart I Raskas Friendship Circle of Illinois, noted that a number of participants recalled with fondness that their first time putting on Tefillin was at this booth with Rabbi Daniel Moscowitz a”h.

The sun shined, the music played the felafel fried and a great time was had by all as Chabad of Illinois put tefillin on with hundreds of people and distributed neshek, brochures and information about its statewide programming countless more

“Festival 2024 will certainly be in Yerushalayim with Moshiach and you can be sure that Lubavitch Chabad of Illinois will be there too,” organizers said.