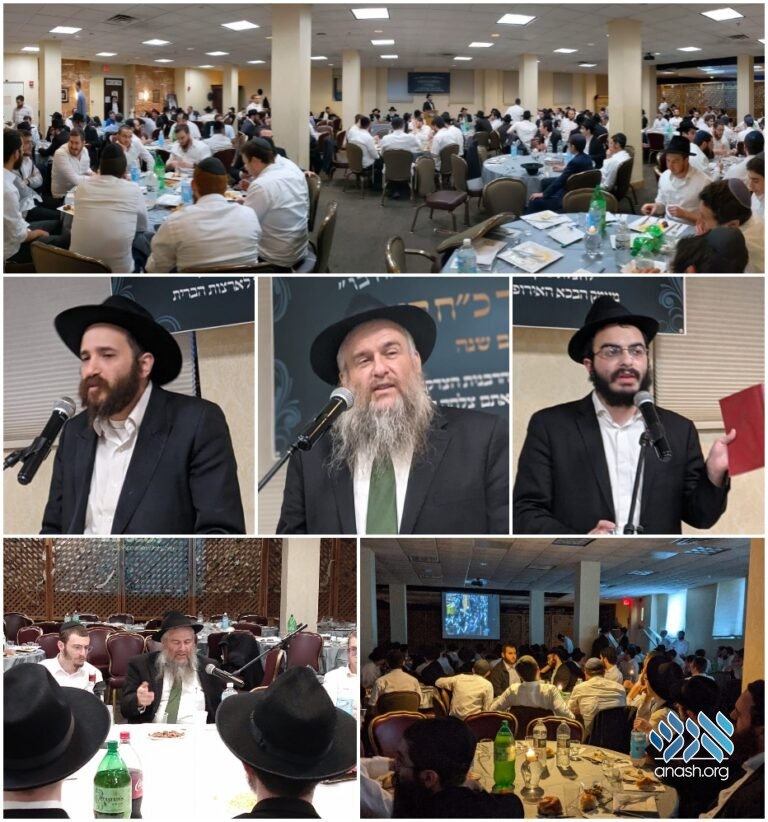 Hundreds of chassidim and bochurim gathered at the Lubavitch Yeshiva in Morristown to celebrate 80 years since the arrival of the Rebbe and the Rebbetzin to American shores, with addresses by hanhala members and guest speaker Rabbi Yosef Chaim Kantor of Thailand.

On Monday evening, hundreds of chassidim gathered together in the Berger auditorium of the Lubavitch Yeshiva in Morristown to celebrate 80 years since the arrival of the Rebbe and the Rebbetzin to American shores.

The hall was beautifully decorated in honor of this momentous occasion, and people from the entire community —including the bochurim from Tomchei Tmimim and Tiferes Bochurim, as well as members from anash and Shluchim from all over New Jersey — joined together to celebrate this special yom tov together.

In order to include as many chassidim as possible in the celebration, the farbrengen was broadcast online for all those who were not able to attend in person.

The program began with a viewing of a video describing the Rebbe and Rebbetzin’s arrival in America.

Following the video, Yitzchok Ezagui, a bochur learning in Morristown, spoke about the happenings of the day, relating in detail the story of the miraculous rescue of the Rebbe and Rebbetzin from war torn Europe.

The next speaker was the mara d’asra of Morristown, Harav Zalman Wilschanski. He spoke about the koach which the day of Chof Ches Sivan gives to each and every one of us to bring an awareness of Hashem to the entire world.

The crowd then heard some powerful words from Rabbi Efraim Piekarsky, a mashpia in the yeshiva. He described the Rebbe’s huge impact on the American boys, and how the Rebbe lifted them up to a level they never thought they could reach.

Finally, they were addressed by the guest speaker, Rabbi Yosef Chaim Kantor, shliach of the Rebbe to Bangkok, Thailand.

One point he shared with those gathered: How can one know where he is holding in his avodas Hashem? Based on those things which matter to you; those things with which get you excited. “When such a yom tov comes around, we can see what everyone truly cares about,” said Rabbi Kantor. His words truly inspired the listeners.

The program was followed by joyous dancing and live music, after which the crowd then sat down to farbreng late into the night.

Everyone left the room that night feeling uplifted and re-energized to take on new hachlatos, and to live their lives in a more meaningful way.