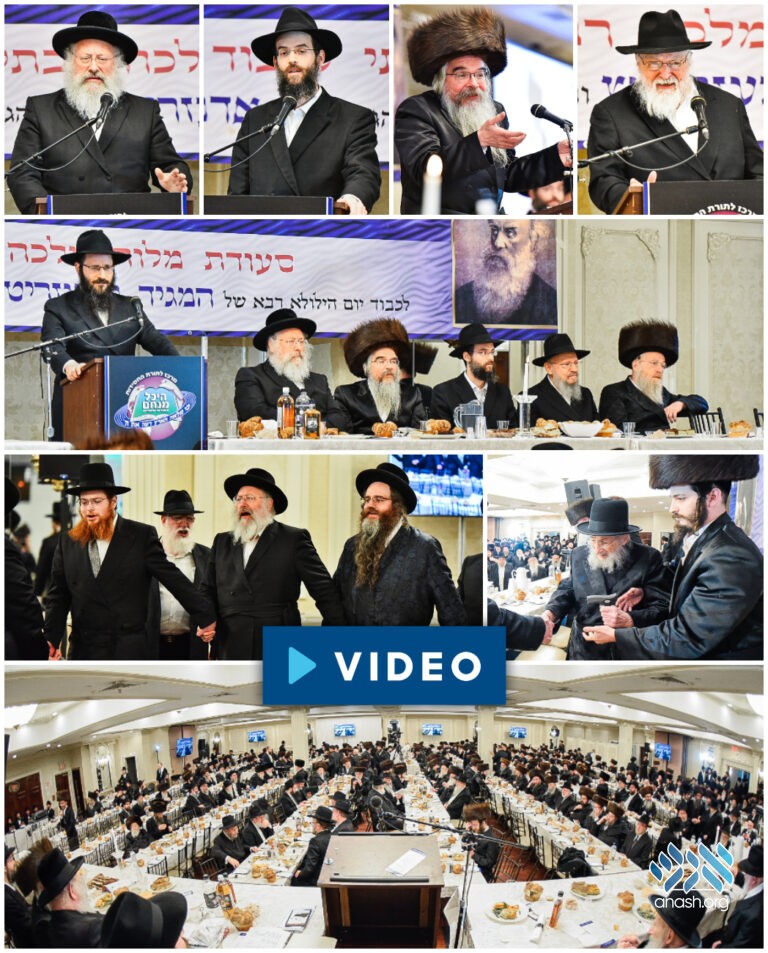 A grand melave malka in Boro Park celebrated the Rosh Hashana of Chassidus with many distinguished speakers and guests. The keynote address was delivered by HaRav Chaim Yitzchak Isaac Landau, rov of Bnei Brak.

This past Motzai Shabbos, hundreds of Yidden from diverse backgrounds gathered to attend the 25th annual Melave Malka in honor of Yud Tes Kislev, organized by Heichal Menachem of Boro Park. Established and spear-headed by Reb Yehuda Leib Altein, the melava malka was graced by Talmidei Chachamim of world renown.

One of zkan HaRabanim, HaRav HaGaon Rav Wolfson, mashgiach and mara d’asra of Bais Medrash Emunas Yisroel, arrived as the evening commenced. His stay was short, as HaRav Wolfson stated emphatically, “It is Yud Tes Kislev- I must go to the Rebbe.”

Rabbi Shloma Sternberg conducted the evening with great skill and derhoibenkeit. He spoke of the mesiras nefesh that the Alter Rebbe had in order to grant the Torah of the Baal Shem Tov and his students to all Yidden.

“Tonight’s simcha belongs to all of us, regardless of affiliation,” he stated emphatically. “That is why we have gathered here, to celebrate and to gain renewed strength in our commitment to learning Chassidus.”

Rabbi Sternberg praised the efforts of Heichel Menachem and encouraged the participants to take upon themselves renewed hachlotos, to increase in learning Chassidus and to avail themselves of the many shiurei Chassidus being offered.

Rabbi Sternberg expressed gratitude to the supporters of Heichel Menachem, including Rabbi Yeshaya Boymelgreen for the Boymelgreen edition of Chassidus Mevueres Tanya and Rabbi Sholom Ber Drizin and family for their yearly sponsoring of the Melave Malka.

Rabbi Fishel Oster spoke passionately about how learning chassidus affects even simple people like ourselves, so that we, too, can live with Hashem.

Rabbi Steinwurtzel captivated the audience with his powerful words, sharing how with Chassidus, one lives with the strength of his Neshama and the cognizance of Elokus. He gave examples elucidating how learning Chassidus sheds light on one’s entire understanding of Torah.

The highlight of the evening was the keynote address, delivered by a distinguished guest from Eretz Yisroel, HaRav Chaim Yitzchak Isaac Landau, Rav of Bnei Brak. Rav Landau’s words penetrated deeply as he stressed the significance of the day and the impact Toras HaChassidus has on our lives.

Rav Landau shared how one’s visage and midos are completely worked over when learning Chassidus. “Even if you feel that you don’t have a geshmak, begin to learn Chassidus and you will find that you have gained a geshmak in it,” he encouraged.

The crowd watched a video of the Rebbe, which offered tremendous chizuk and encouragement.

Hartzige Chassidishe nigunim were led by Yossi Cohen and the Kapelle Choir, elevating the atmosphere. Each niggun was introduced with a brief explanation. “When we sing the Nigun Daled Bavos” urged Rabbi Sternberg, “we have the ability to send a kvittel up to the Alter Rebbe.”

After birchas hamazon, many stayed on as Rav Landau continued to farbreng until late into the night.