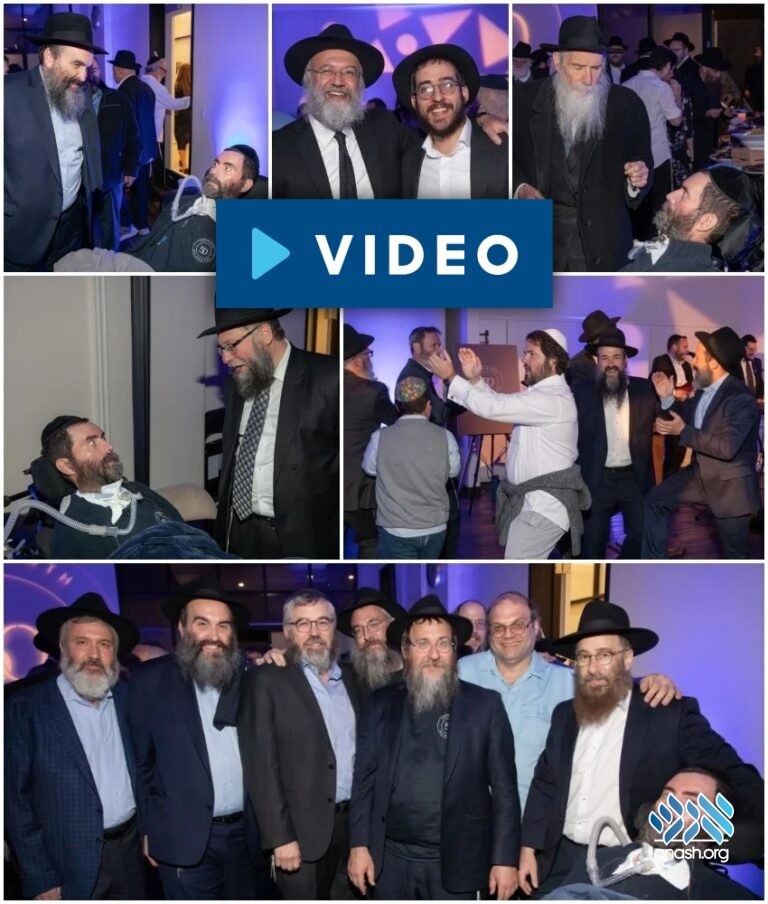 Hundreds of members of the Chabad and greater community of Los Angeles came out Sunday night to celebrate the 50th birthday of Rabbi Yitzi Hurwitz, who has inspired thousands throughout his heroic battle with ALS.

Speakers included Rabbi Shlomo Cunin, Rabbi Avrohom Meir Zajac from Chabad of SOLA, Rabbi Yossi Baitelman, Chabad of Studio City, who is one of the “Fantastic Five” who run the Hurwitz Family Fund, and Rabbi Shea Werner who brought personal greetings and warm wishes from KMR.

Rabbi Hirshy Minkowitz from Chabad of Alpharetta, read a special dvar torah written by Rabbi Yitzi and spoke movingly about his childhood friend, sharing memories and inspiration he drew from R’ Yitzi when he was facing his own personal challenge. Minkowitz shared that just that morning he had attended the Atlanta Jewish Life Festival and couldn’t get over the hasgocha protis that the song performed by the Atlanta Jewish Boys Choir was R’ Yitzis own Shine a Little Light.

Rabbi Mendel Polichenko of Chabad of Carmel Valley shared a personal story and read a page of personal thank you’s from Rabbi Yitzi. The running theme from all of the speakers was the incredible strength that people around the world continuously draw from R’ Yitzi.

“Yitzi is the most inspiring person I’ve ever had the privilege of knowing,” said Chaim Marcus, the evening’s producer, “we are blessed to have Yitzi with us in LA. As much as we tell Yitzi how much we appreciate him and how much he inspires us, I’m not sure he fully realizes what kind

of impact he has on people’s lives on a daily basis.”

“This was a community-wide event,” added Marcus, “and thanks are due to those who made it possible, including Bibi’s, Beverly Hills Bagel Co, Schwartz’s, Delice, Jeff’s. Special thanks to Dovid Lieder from Lieder’s and Berel Cohen from Premier Catering.”

If you’d like to make a difference for R’ Yitzi, please visit https://hurwitzfamilyfund.com or for more information please reach out directly to one of the fantastic five: Rabbis Simcha Backman, Yossi Baitelman, Shlomo Bistrisky, Mushy Fogelman and Reuven Mintz.