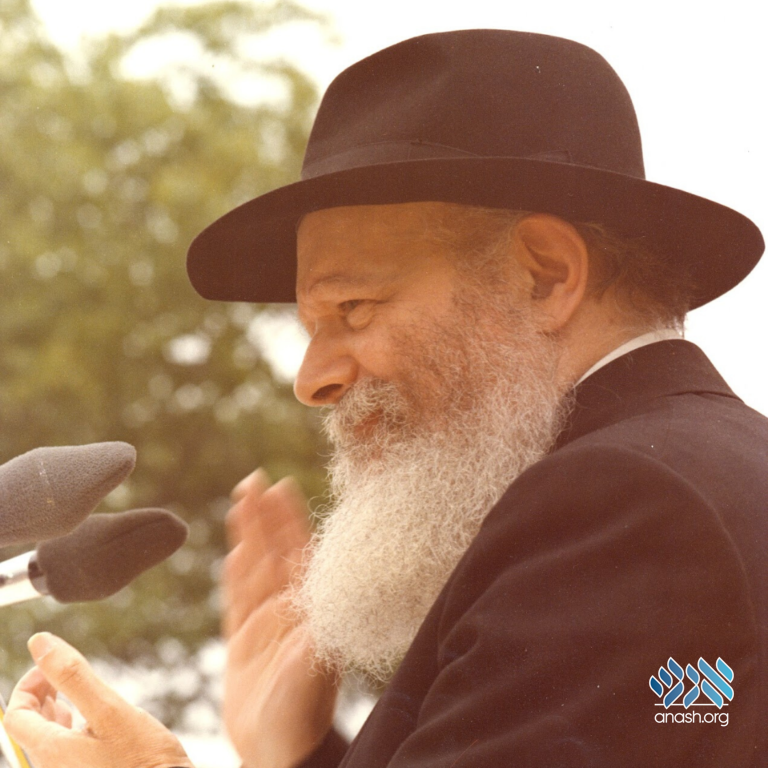 Nothing the Rebbe said or did was ever casual. To be a follower meant a mindset, an obedience to the Rebbe’s will and a deference to his holiness.

The Avner Institute presents several encounters narrated (and adapted) from the diaries of Rabbi Sholom Dov Ber Reichman, whose fellow Chassidim affirmed the Rebbe’s incomparable humility, memory, and wisdom, which shaped and permeated their everyday lives.

The following was told to me by Rabbi Yisroel Tzvi Heber:

It was 5726 (1966). When my friend Rabbi Avrohom Tzvi Cohen, a”h, returned from visiting the Rebbe, I asked him what he noticed that was special about the Rebbe.

Rabbi Cohen said, “In my youth I had visited many Polish tzadikim, but never encountered the humility — bittul and anava — I found in the Rebbe.”

I asked him to explain what he meant, and he continued, “One of the times the Rebbe returned from the Ohel, he walked to the end of the hall in 770 in order to wash his hands.

“At that moment I happened to be there, washing my hand, and I did not notice the Rebbe standing behind me. Suddenly, I turned and noticed the Rebbe waiting.

“I trembled and turned pale. The Rebbe immediately apologized and asked my pardon for causing me such discomfort.”

Rabbi Cohen concluded, “That’s how I saw the Rebbe’s tremendous humility and refinement – how sensitive he is not to cause any unpleasantness to the Chassidim.

I heard a fascinating story from Rabbi Leibel Zalmanov of Bnei Brak. He told me about his life-changing encounter:

“In Iyar 5714 (1954) I went to the Rebbe for the first time, having won the first raffle of its kind in Eretz Yisroel. A few days after my arrival my cousin, Rabbi Shmuel Zalmanov – editor of the yeshiva publications HaTamim and Seifer HaNiggunim – had a yechidus, private audience, with the Rebbe. Although related, Shmuel and I had never met before.

Apparently the Rebbe asked him about me: “Is your cousin adept in public speaking?”

Shmuel answered that he didn’t know me, and that he was meeting me for the first time.

The Rebbe replied, “Then he should review Chassidus on Friday night, and we’ll see how he speaks.”

Upon our first meeting, my cousin told me what the Rebbe had said. The next Friday night, while one of the students was reviewing Chassidus, I gave over a ma’amar, a lengthy Chassidic discourse, out loud. When I finished, the elderly mashpia, mentor, Rabbi Shmuel Levitin approached me in amazement.

I didn’t reply, but I knew that this was what the Rebbe had wanted.

After Shabbos I was asked to go with Rabbi Dov Ber Baumgarten, a”h, who was active among Jewish college students in New York, to lecture at one of the campuses. Although the students didn’t understand much of what I said, they were attracted to Chabad because hearing someone speak in Hebrew had back then a certain appeal.

That’s what the Rebbe wanted to accomplish in his desire that I speak in public.

This I heard from Rabbi Dovid Goldstein:

The year the Rebbe Rayatz, the previous Lubavitcher Rebbe, had passed, I went to the Rebbe after prayer service and asked what the beginning of avodah, Divine service, is.

The Rebbe said, “The beginning of avodah is to refrain from doing what you want.”

A few minutes later, accompanied by his mother Rebbe Chana while walking down the steps of the Rebbe Rayatz’s house, the Rebbe told me, “I didn’t mean that you should refrain from donning tefillin, G-d forbid!”

He smiled broadly toward his mother.

On Shabbos Bereishis 5753 (1993) Rabbi Goldstein farbrenged in the sukkah in the courtyard of 770, and related a few incidents that took place in the beginning of the Rebbe’s leadership.

I once asked the Rebbe for advice on how to get rid of unwanted thoughts. The Rebbe told me to picture the Rebbe Rayatz in his mind.

On another occasion, I asked the Rebbe the same question.

The Rebbe answered, “Machshavos zaros? Vos hot dos a shaichus tzu dir? Foreign thoughts? What connection do they have with you?”

This I heard from Rabbi Moshe Yaroslavsky:

One year we were returning to Eretz Yisroel on 15 Cheshvan. It was a Sunday, so my wife and I went to receive a blessing at “dollars,” which the Rebbe handed out to each visitor.

My wife said that we were no longer busy with guests in over a fortnight since Hachnasas Orchim, the guest placement office, had closed.

The Rebbe replied, motioning toward me, “I saw him involved with guests yesterday.”

At first I didn’t understand what the Rebbe meant. Then, after additional thought I remembered something.

At the Shabbos farbrengen many guests crowded around the Rebbe’s platform, among them a group from Brazil and a group from Los Angeles. Needless to say, it was very crowded, and one of the guests complained that the overcrowding was sakanas nefashos, endangering lives.

Hearing that, I told him, “Listen, at one of the gatherings of the Gerrer Rebbe, Rabbi Avrohom Mordechai, in Eretz Yisroel, the crowding was also terrible and someone yelled out, ‘Sakanas nefashos!’ The Gerrer heard him and replied, ‘Takanas nefashos, the fixing of souls.’”

All the guests in the vicinity smiled as I told this, and just at that moment our Rebbe turned toward us. I realized what the Rebbe meant when he said, “I saw him involved with the guests.”