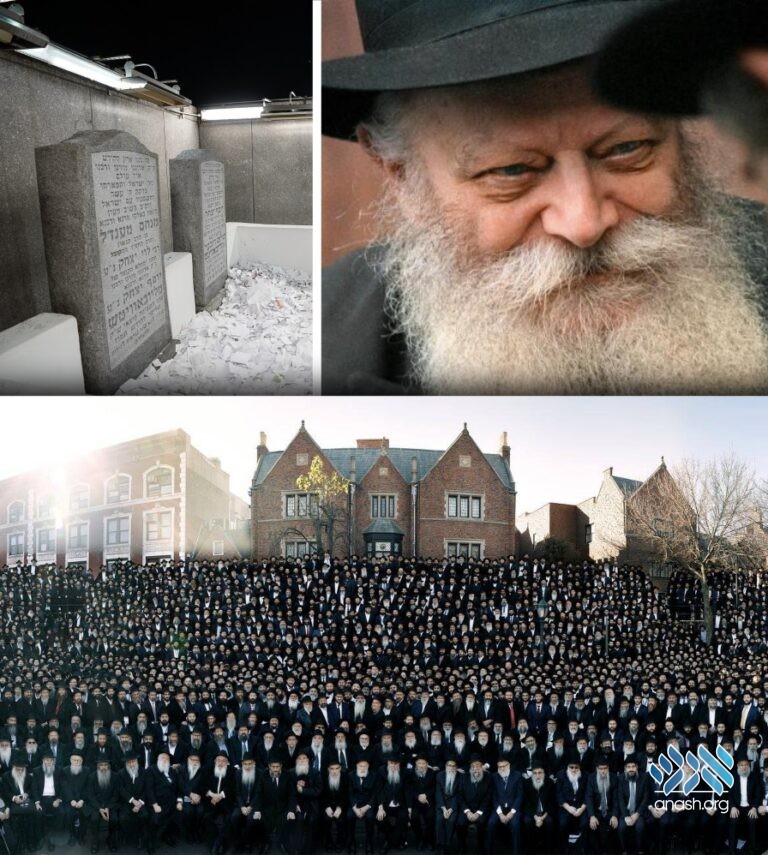 The topic of the Frierdiker Rebbe’s continued – and growing – presence was a constant theme throughout the Rebbe’s nesius, one repeated countless times over the years. But how does “hu b’chaim” translate into our physical reality? Presented for Gimmel Tammuz.

The Feud with the Government

“The following story occurred a few weeks ago,” the Rebbe related on Simchas Torah 5716.

“Knowing how much the Rebbe der Shver cherished every additional moment of Torah study and that he famously fought very hard to preserve the hours of limudei kodesh, someone [i.e. the Rebbe himself] instructed schools to begin the school year some time before the official, government determined date, and they indeed did so—this was in Eretz Yisroel.

“When the relevant government department caught on, they came to the school that had opened two weeks early and demanded explanations. They had specifically ordered that the school year begin on a specific date; yet they began learning Toras Hashem two weeks earlier! They warned that this situation cannot continue; they must follow the government’s program, and if they refuse, they will stop supporting the school and cut all ties with them.

“We are dealing with an individual who isn’t proficient in Shulchan Aruch, so the principal didn’t enter a discussion of the relevant halachos. In his letter to me, he wrote what he said to them.

“This school had been requesting funding to build a gate and to erect some other necessary structures. The very day after he gave them that answer . . they came and built everything which for over two years they had ignored…

“He has no explanation for what happened, and there is no explanation at all… The principal merely declared that he had received a directive from a certain person whom he crowned with a certain title [i.e. the Lubavitcher Rebbe], a title which that official doesn’t comprehend anyway. Yet it affected him to the extent that although he had been furious and had threatened to cut all funding, the very next day he provided the money they had been requesting for over two years . . simply because the principal demonstrated that through me, he is connected to the Rebbe der Shver.”

The Rebbe related the above story at length, in the midst of a powerful and emotional sicha about the continued presence of the Frierdiker Rebbe in this world.

“Those who evaluate the situation without bias and personal interests,” the Rebbe noted, “see that ever since the histalkus, all of the Rebbe’s activities have been blessed with renewed success, far more than before.

“During his physical life-time in this world, he was hindered by the limitations of his body. Therefore, although he did have successes, those came about through difficult toil. At times, it even came about through ‘Vehu mecholal mipsha’einu—he suffered for our transgressions,’ with everything he went through…

“But after his passing, he is present in all worlds more than during his lifetime, and especially in this physical world, for the shepherd will not abandon his flock. The success therefore begins to be at an entirely new level, without limitations.”

“Anyone who knew the Rebbe during the 30 years of his nesius,” the Rebbe said shortly after Yud Shevat 5710, “knows that he would never abandon his Chassidim…”

In a well-known sicha during that first year, the Rebbe repeated the story of Rabbi Yehuda Hanasi, who requested that his lamp, table and bed remain in their position even after his passing. The Rebbe explained that each of those represent one element of the Rebbe’s hashpa’a, both spiritual and physical, and the message was that his hashpa’a would continue in every single aspect of our personal lives just as before.

For how long does this hashpa’a continue?

On the occasion of the twentieth anniversary of the Frierdiker Rebbe’s histalkus, the Rebbe spoke about Shimshon, who the Talmud Yerushalmi famously says continued to lead the Jewish people for 20 years after his passing.

“There is a rule in halacha that maalin bakodesh velo moridin—we increase matters of holiness,” the Rebbe said, “and we do not detract chas veshalom.

“It seemingly doesn’t make sense to say that Shimshon led the Jewish people for the 20 years after his passing, and then ceased to do so. But in regards to Shimon there is no question, because another shofet appeared.

Ein malchus nogaas b’chaverta—one kingship cannot exist at the same time as another—so Shimshon’s leadership needed to end once another shofet appeared. “But when speaking of a nossi of the Jewish people, asher mi yiten lanu temuraso—who is irreplaceable—it is obvious that maalin bakodesh—after 20 years he continues to lead, and even more than before.”

“When the Rebbe der Shver departed from Russia, he said, as he did on a number of occasions, that it was against his will. As he crossed the border, he added, ‘Although there is a physical barrier separating myself and the Chassidim who remain behind, one need not be intimidated by it. My bond with them will continue as before.’

“This was indeed the case, not only in a spiritual sense, but even in material terms. There are many well-known incidents related by various people that display his direct involvement in activities on the other side of the Iron Curtain.

“In other words: even while his soul remained confined to the limitations of a physical body, he had the ability to determine that the physical barriers should not be of any relevance. He was able to maintain the bond with his followers in a manner that not only allowed him to connect with them, but that allowed them to reach him as well. This was despite their being people of a much lower spiritual status, upon which physical boundaries did have an impact.”

The foundational teaching the Rebbe would often quote is a story in Maseches Taanis, about a conversation between Rav Nachman and Rav Yitzchak:

Rav Yitzchak said to Rav Nachman in the name of Rabbi Yochanan, “Yaakov Avinu did not die.”

Rav Nachman asked him in surprise, “Was it for nothing that the eulogizers eulogized him and the embalmers embalmed him and the buriers buried him?”

Rav Yitzchak replied, “Mikra ani doresh—I am interpreting a possuk “ואתה אל תירא עבדי יעקב נאם ה’ ואל תחת ישראל כי הנני מושיעך מרחוק ואת זרעך מארץ שבים” – Therefore do not fear, Yaakov my servant, says Hashem, and do not be dismayed, Yisrael, for I will save you from afar, and your progeny from the land of their captivity.’ This possuk compares Yaakov to his progeny: מה זרעו בחיים, אף הוא בחיים – just as his progeny are alive, so too, Yaakov himself is alive.”

This limmud is often thought to be a message of the spirit: Through his children continuing in his ways, Yaakov’s legacy remains alive, so it is as if he is still alive himself.

But the Rebbe called that the “watered down version:”

How, indeed, does a Tzaddik remain alive after his passing?

After the histalkus of Reb Mendel Horodoker in Eretz Yisroel, the Alter Rebbe sent a letter to Chassidim, where he expounded on the meaning of a tzaddik’s life.

The letter, which was later included in Igeres Hakodesh of Tanya, explained that the life of a true tzaddik is entirely spiritual; his sustenance is ahavas Hashem, yiras Hashem and emunah, and his body is only a conduit for carrying out Hashem’s will.

“When the secondary element is removed and only the essence remains,” the Rebbe explained, “it cannot be called death… It was his spiritual side that mattered most to him and his physical body was merely a garment, so he merely switched one garment with another; nothing really changed.”

[The Rebbe once explained that this means something more than intense avodas Hashem. The meaning of a spiritual life is expressed in the story of the Tzemach Tzedek, who, before his passing, said that he didn’t see the pole, but rather the koach Eloki that was giving it life; in other words, he saw everything as a clear extension of Elokus.]

The Alter Rebbe explained that the tzaddik lives on because his life is entirely spiritual. But why is that associated with his children?

The proof that the tzaddik lives on, the Rebbe explained on many occasions, is demonstrated through his children: When new generations continue to carry out his work, and more and more people continue to live with his message—often with very great self-sacrifice, that is the greatest evidence that hu bachayim.

The Rebbe emphasized that “ma zar’o bachayim” does not mean that Chassidim make him live on. To the contrary, the nossi himself lives on independently, and that is what gives his children the strength to carry on in his ways. We, as Chassidim, are a living proof that the Rebbe is alive.

In the sicha from Simchas Torah 5716 cited at the beginning of this article, the Rebbe made a poignant statement:

“Was there ‘azav’? Did he leave us? Only if ‘taazveni’—if we leave him—then ‘aazveka’—he will leave us. If there is no ‘taazveni,’ there will automatically be no ‘aazveka.’ There will be no ‘azav’ at all…”

The Rebbe constantly repeated that the key for the continued connection is that we make the proper effort to remain connected to him, through visiting the Ohel, studying his Torah, engaging in his work, envisioning his presence and strengthening one’s belief that he remains as connected as before.

The Rebbe explained that even those who never saw the Rebbe at all—or even if they did and for whatever reason did not connect with him during his physical lifetime in this world—had the ability to be connected to him in the same way.

“There is a well-known saying of the Rebbe, that Pesach Sheini teaches us ‘es iz nita kein farfalen, it is never too late,’ and we can always correct our misdeeds…

“This serves as a lesson in regards to hiskashrus as well:

“This is the lesson of Pesach Sheini: Even those who didn’t offer the korban on Pesach Rishon, even if it was their fault, they can correct the past through bringing the Pesach Sheini. The same is true in our case: Those who didn’t derher [their connection to the Rebbe] could still do so now, and thereby correct their past as well.”

And Let Us Say — Amen

When we bless the new month every Shabbos Mevarchim, there is a unique element to the final wish of Yechadesheihu: the blessing of yeshua venechama receives a venomar amen, something that isn’t present in the earlier blessings.

“We can propose a reason,” the Rebbe explained in 5710, “that during the first brachos—l’chaim, l’sason u’lesimcha—which are revealed and apparent goodness, we immediately respond amen [on our own]. But for yeshua venechama, being that it comes after pain and suffering—even though everything is ultimately for the good—nonetheless, entfert zich nit kein amen—we aren’t inclined to respond with an automatic amen. Therefore, a special encouragement is needed, and the tefillah concludes with v’nomar amen.

“The same can be said regarding the histalkus:

“Although we know that the histalkus is an elevation for the Rebbe, as well as for us, nonetheless, because it is not a revealed blessing, entfert zich nit kein amen…

“We will say amen when the Rebbe der Shver will come lead us toward Moshiach Tzidkeinu, may it be very soon, speedily in our days, amen!”

Build a stronger connection.
Start getting the Derher each month and save 15%!
Using the following promo codes to apply the discount:
3TAMMUZ-YEARLY for a yearly subscription or
3TAMMUZ-MONTHLY for a monthly subscription
Derher.org/subscribe