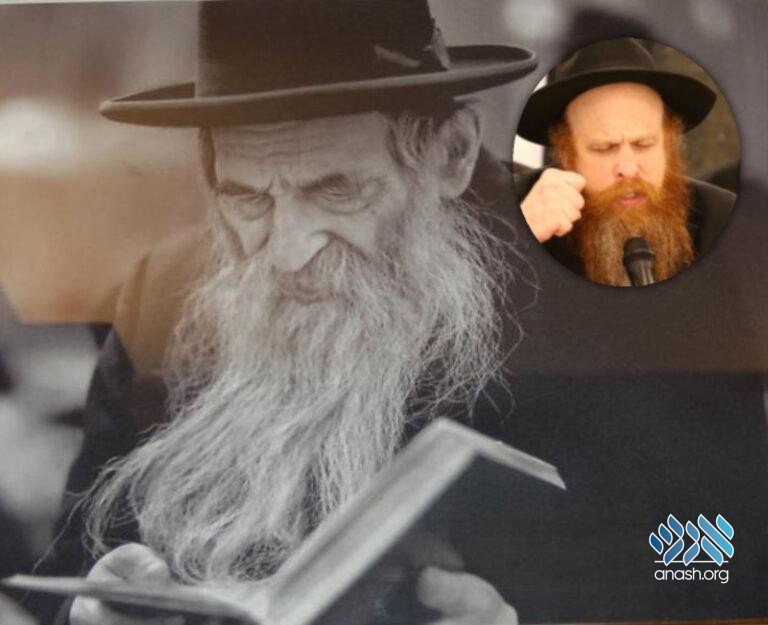 When the Rebbe refused to respond lchaim to R’ Avrohom Mayor (Drizin), R’ Avrohom said something powerful that made the Rebbe change his mind.

The following story was shared by a prominent Rov in Toronto this past summer. I am sharing it as he told it:

“There was a meshulach staying in my home. He used to be a Lelover chosid, but he was currently a Lubavitcher chosid. I was intrigued by this, and I asked him what brought about the change. The following was his response:

After his Rebbe, the Lelover Rebbe, passed away (in the late mem’s), he had been searching for a new Rebbe. He visited a few Chassidic courts, trying to find a fitting Rebbe for himself. During that time, he also wrote a letter to the Rebbe, in which he posed 5 questions.

Before long, he received a reply from the Rebbe, in which the Rebbe addressed 3 of his questions.

A few years later, he had the opportunity to visit the Rebbe on a Sunday, to receive a dollar. Immediately after handing him a dollar, the Rebbe addressed the 2 remaining questions that had been left unanswered. At first he was amazed! In the years that had gone by, the Rebbe had received tens of thousands of letters, and personally greeted thousands of people. That the Rebbe remembered the unanswered questions from his letter was simply extraordinary!

A split second later, another thought entered his mind: After all, (part of) the reason he had sent the letter was because he was seeking a Rebbe for himself. And, in that case, if this was the extraordinary response to his letter, then did that not mean that he should accept the Rebbe as his Rebbe?

All of this took seconds, or split seconds (we all know that no one was given leisurely time to spend in front of the Rebbe). But, as the second thought entered his mind, he suddenly heard the Rebbe’s voice saying (not in response to anything else that he could tell) “Ye”!

So, that finalized his decision for him!

What is Yud Shvat?

What does it mean to accept the Rebbe as Rebbe? What is a Rebbe?

First and foremost, he is adoneinu, he is our master. That means we have to obey him. Not some of the time. Not most of the time. But all of the time. Whether or not it’s convenient or appealing to us. The first step of a chosid accepting the Rebbe as Rebbe is our kabolas ol, to unquestioningly follow his directives and instructions.

“Rebbe”, the chosid said, “Altz vos ir vet mir heisen vell ich eich folgen, ober dos ken ich nit ton” [whatever you tell me, I am prepared to obey you, except for this one thing which I am unable to do].

The Rebbe Maharash replied: “In that case, then I must be lacking in מי שיש בו יר”ש דבריו נשמעים…” The Rebbe put his head down on his arms for a few moments. When he raised his head, his visage was awesome. The chosid was frightened, and he jumped up, exclaiming: “Rebbe, I am going to give the get immediately!”

Sometimes we, too, like the chosid in the story, may feel that we fulfill our duty by doing almost everything that the Rebbe expects of us. In fact, we may be not merely doing them, we may be excelling in them, leading in them and carrying them out better than everyone else.

So what’s the big deal, we may think, if there’s one little area that we may have a hard time with. With one person it may be Rambam, with one person it may be learning chassidus and with someone else it may be ahavas yisroel. But we are emphatic: I am ready to do everything, to be your most loyal soldier. Except for that one little area. Except for the get. Why focus on that one little thing, why not focus on all of the good that I’m doing?

But that is not a chosid. Accepting the Rebbe as our Rebbe must be without exception, and without conditions. In fact, often it may be that that one area with which we have such difficulty may be the thing that it is most important for us to work on.

The Rebbe is our moreh derech, our guiding light. Of course, the foundation of our relationship must be kabolas ol, unquestioning commitment. But, of course, it is much more than that. The Rebbe shows us how to live our lives, he guides us and educates us. As a chosid, I must also recognize that guidance, and internalize it, be influenced by it.

The Rebbe revolutionized the mindset of our entire generation in so many ways. And, of course, in many areas it is inevitable that our way of thinking is affected by the fact that we’re chassidim (or, just the fact that we’re living in this generation). But, to be a chosid means to develop that further.

Every sicha that we learn, every farbrengen and every igros, we need to learn in a way that we internalize the mindset. It has to change the way we think and the way we approach life. The Rebbe is teaching us how to live our lives and what our attitude should be, so that we know on our own how to deal with our situations as chassidim. We don’t need to always be told what to do and what not to do in every circumstance. We need to have already been taught the way a chosid behaves, so that we can ourselves relate it to every situation.

The story is told that R’ Chaim Brisker was once speaking with someone in learning. In the course of the conversation, the other person quoted a tosefos. R’ Chaim argued “There is no such a tosefos”. They checked, and determined that, indeed, the tosefos had been misquoted.

Afterwards, R’ Chaim explained: “it wasn’t that I remembered every single tosefos in shas. But I was certain that it was not possible for tosefos to say what that person quoted”.

Our way of thinking, mentality and attitude need to be guided by the Rebbe to the point that we know, without being told, how the Rebbe would or wouldn’t want us to deal with an issue.

One of the primary tools for this is the first 4 volumes of Likutei Sichos. They contain the general ideas with which the Rebbe revolutionized our entire era, and with which, in a more specific and individualized way, the Rebbe revolutionizes each of us. We need to learn and – periodically – relearn those sichos in a way that we ensure that we internalize their messages and guidance.

The Rebbe is…well….our Rebbe. He teaches us Torah. In learning the Rebbe’s Torah as well, it’s not enough to learn it with kabolas ol, because it’s chassidish to learn a sicha or a maamar. Every sicha is not only teaching us the meaning of a specific Rashi or Rambam, but, more importantly, the Rebbe is teaching us how to learn, analyze and understand a Rashi or a Rambam. (The Rebbe wanted that we should learn all of the Rashi’s in the Parsha according to the rules that he taught us). A maamar of the Rebbe teaches us how to read a maamar in Likutei Torah and see an entirely new maamar, or how to dissect and interpret a maamar of the Rebbeim.

The Rebbe devoted so much of each farbrengen to teaching us; – scrutinizing a Rashi, a pilpul in a sugya, hadronim on mesechtos etc. It’s not enough for us to learn what the Rebbe said (although that is, of course, the first step), we need to also learn from what the Rebbe said. How much does the approach we learned from the Rebbe affect the way we learn a different sugya in nigleh or chassidus?

[And another point: When you learn a sicha, it’s not enough to memorize the words of the sicha. If the sicha taught you, then you need to appreciate the points in the sicha on your own. The questions become your questions, you identify with them. And the answer that then resolves them becomes an answer that you are personally excited about.

The difference is apparent when you have to share a vort in the parsha with someone else. You are not telling him “The Rebbe asks” and “the Rebbe answers”. Rather you are sharing a question with him that has become your own. You then share an answer that takes away the problem. You are enthusiastic about the vort itself, and that is contagious].

On Yud Shvat we need to accept the Rebbe as our Rebbe. We need to contemplate on the meaning of Rebbe, and recommit ourselves to each of its aspects. It doesn’t matter who we are, if we are a greater chosid or a simple chosid. Every chosid needs to renew his hiskashrus with the Rebbe on Yud shvat.

R’ Avrohom Mayor (Drizin) was a great chosid and mekushar. לפום גמלא שיחנא, – according to the level of chassishkeit is the expectation. When he didn’t live up to the expectations of him (basically, he said, in his way, that he’s ready to do anything except the one thing….), the Rebbe expressed his disappointment openly. The following took place during that period:

It was during a seudas yom tov together with the Rebbe. R’ Avrohom was not one of the invited guests, but he showed up. There was a bochur sitting on a bench, facing the Rebbe, and R’ Avrohom moved him over and sat down in his place.

He picked up a small cup, turned to the Rebbe, and said: “L’chaim Rebbe”.

But the Rebbe didn’t answer him.

He tried again, and said a second time “L’chaim Rebbe”.

But the Rebbe continued to ignore him.

R’ Avrohom picked up his cup a third time, and said (approximately): ‘Rebbe, you are a yoiresh (heir, inheritor), and a yoiresh inherits everything, the bad along with the good. L’chaim Rebbe”.

And the Rebbe replied “L’chaim ulevrocho”!

By strengthening and renewing our hiskashrus with the Rebbe, we will be able to serve as the צבא, the army and soldiers who carry out his shlichus and actualize his mission, to bring the shechina from the first rokia down onto this physical world and complete the dira batachtonim with Moshiach now!

L’chaim! May we all use out the auspicious days of Yud and Yud Aleph Shvat to strengthen and renew our hiskashrus with the Rebbe, and on this Yud Shvat, the culmination of 70 years (which indicates shleimus, as the Rebbe teaches us regarding הרי אני כבן שבעים שנה) may we see the culmination and completion of the bosi legani, in the 3rd Beis Hamikdosh, with the immediate hisgalus of Moshiach Tzidkeinu NOW!!!