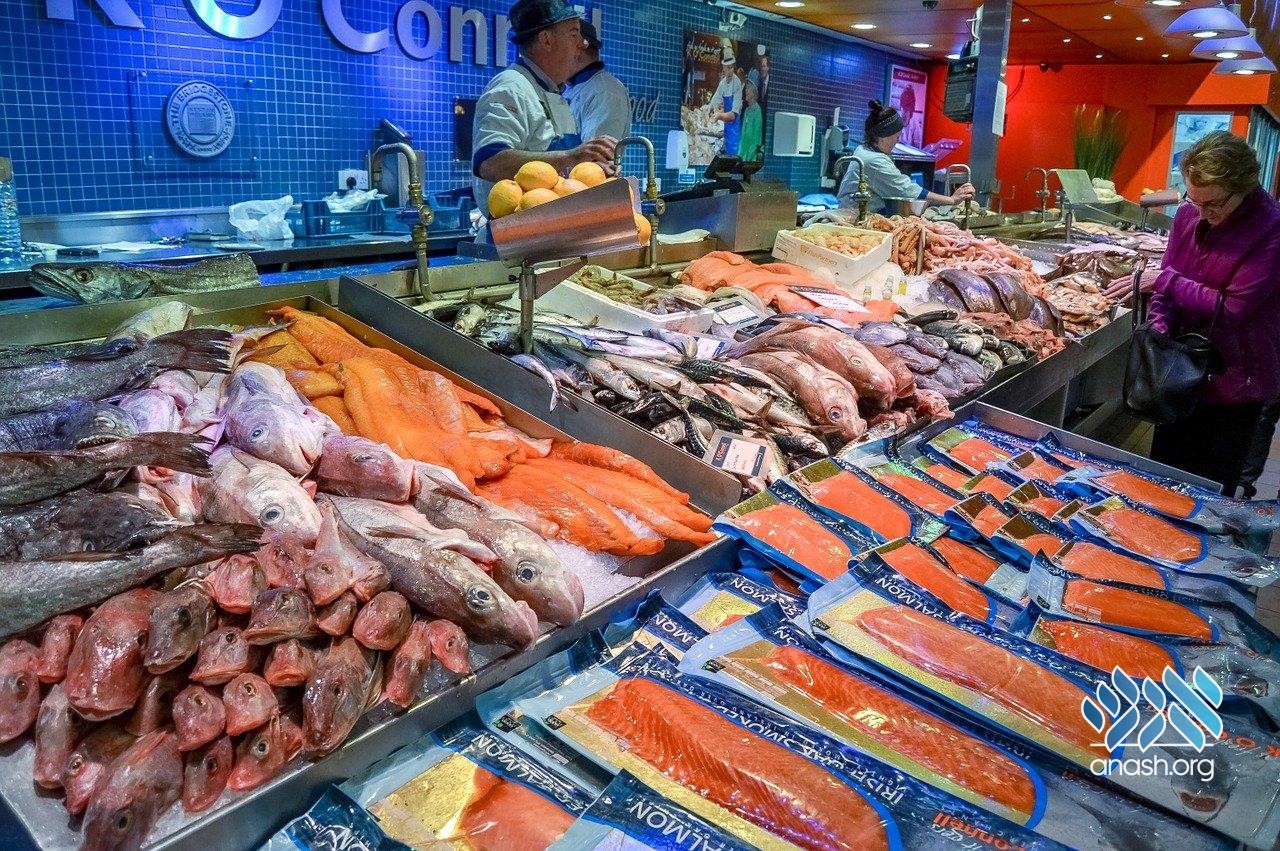 Buying fish in a non-kosher establishment raises many shailos and uncertainties. This guide provides clear instructions on how you can shop for fish in a general market.

“Kashrus: Be In The Know” was created with the intention to increase kashrus awareness and provide consumers with a knowledge of basic halacha, as well as important information regarding how foods are made and processed. With this information, we hope to help people in making educated choices when buying products.

Although the classes are given by Rabbis who both work in respectable hashgachos, and have a depth of knowledge in Halacha as well as the food industry, the classes given do not reflect the opinions of the agencies they work for. It also does not in any way replace asking questions to a Rav. Everyone is encouraged to reach out to their Rav when deciding on personal Kashrus standards.

To join a weekly WhatsApp group for up to date, practical Kashrus knowledge, click here for men’s group and here for women’s group.

To view past classes, and for more information, log onto www.kashrusbeintheknow.com

There are two main issues when it comes to purchasing raw fish fillets from a store that isn’t under a reliable Hashgacha.

1) Most importantly, one must be sure that the fish they are buying is, in fact, a kosher fish. The Torah only allows us to consume fish that have (a) Snapir- fins and (b) Kaskeses- specific type of scales that comes off without damaging the fish’s skin.

One may not rely on the name of the fish being listed as Kosher on a kosher fish list, to determine its kashrus status, as; (a) in some cases multiple fish (kosher and non-kosher) are referred to by the same name (for example rock salmon is NOT kosher) and (b) there is considerable fraud in the fish industry (in the USA more than 20% of fish are fraudulently labeled) with one fish being passed off as another.

Therefore, the only reliable method of determining that a fish is from a kosher species, is by inspecting its scales to be sure that the fish has the Kaskeses type of scales (as mentioned above, a type of scales that come off without damaging the fish’s skin). This can be done by pulling out a scale from its skin. (a) It should be relatively easily removable. (b) Then check the skin to make sure no damage was done when pulling out the scale. If the fish was scaled and one does not find scales on the fish, they should check by the fins, gills or tail or along the edges of the fish, many times scales are left by mistake in those areas.

Some authorities consider the color of salmon to be a unique color that is only found by kosher fish and that it suffices to be a siman that a fish is kosher. Other don’t approve of the salmons color to be a proof of the fish’s kosher status. One should ask their local orthodox Rabbi what to follow.

The reason for this is because non-kosher stores which sell both kosher and non-kosher fish, will use the same knives and cutting surfaces to cut the fish, whether kosher or non-kosher. Therefore, residue from the slicing of non-kosher fish remains on the blade of the knives and cutting surfaces. Subsequently this residue cross contaminates the kosher fish being cut with the same knife or surface and this residue is rubbed into the flesh at the cutting site of the kosher fish. Therefore, fish fillets and fish steaks should preferably be purchased from a store which has a reliable Hashgacha.

If one does not have access to a fish store with a reliable Hashgacha, there are a few approaches to take when buying kosher fish from a non-kosher fish store. It is advisable to try and shop during hours that the store is less busy. Fish sellers will be more cooperative with the necessary requirements for a kosher order, as described below, if there are fewer customers waiting and the store is not being rushed to fill orders. The following should be done when buying fish from a non-kosher store:

a) Best case scenario– If there is the option for a new fish to be filleted just for you, you should bring your own kosher knife, knife sharpener and cutting board and have them use your equipment to fillet/cut the fish. Make certain, as well, that the person handling your fish washes their hands or changes their gloves prior to cutting your kosher fish.

One must be certain that the worker only uses the knife and board that was brought by you. This is particularly true when you do not bring a high-quality filleting knife, because it will be to the worker’s benefit to use the store’s knife, as not every knife is easy to work with. One cannot rely on a store that claims to have separate knives for kosher customers, unless the store has reliable kosher supervision.

If the flesh of kosher fish at any point mistakenly touches non-kosher fish residue, one cannot merely rinse the fish but rather must wash it thoroughly before using it.

b) If you didn’t bring your own kosher knife and cutting board, and there is the option for a new fish to be filleted just for you, you can have the store wash their cutting surface very thoroughly and then cover their cutting area with a few layers of new butcher paper or the like. They should then scrub their knife well with soap and steel wool or the like, to remove any and all fatty fish residue from it. Once this is done, they can fillet/cut the fish for you.

Make certain, as well, that the person handling your fish washes their hands or changes their gloves prior to cutting your kosher fish. If the flesh of kosher fish at any point mistakenly touches non-kosher fish residue, one cannot merely rinse the fish but rather must wash it thoroughly before using it.

c) If neither of those options are possible and no fish store is available under reliable Hashgacha, there is basis to permit the purchase of cut up kosher fish fillets from any store. However, since there is a strong possibility that the fish was cut with a dirty non-kosher knife or on a dirty non-kosher surface, one should thoroughly rinse off the fish before cooking it.

The basis to permit this is since we can assume that the store employees generally clean the surface area and knife in between filleting different fish. In addition the knife and surface was used to cut many slices from the same kosher fish, and any possible non-kosher residue wiped off the knife and surface right at the start of cutting on the first few pieces of fish, and it’s likely not on the piece you chose now.

The worst-case scenario would be if the store would have actually used a dirty knife or surface to cut just that one piece you took; in that case, you would have to very thoroughly wash any surfaces of the fish that had been cut or came in contact with non-kosher residue and that would suffice. Since one cannot know what happened, one would have to always wash the fish thoroughly before using it.

A large company that fillets fish on a vast scale, will usually fillet one kind of fish (hundreds or thousands of that kind) and then after basic cleaning it will fillet the next type of fish. The chances of cross contamination is much smaller by a large company, than by a local fish store that has all the fish being cut up in the same area with same equipment at the same time.

By a factory, in the worst-case scenario, if the equipment wasn’t washed properly, the non-kosher residue surely gets wiped off the equipment right at the start of the cutting process by cutting the first few fish. After those few fish are cut, hundreds or thousands of more fish were cut with this now clean equipment. It’s not likely that you are buying specifically the piece that was cross contaminated with non-kosher residue. But nevertheless, since one cannot know what happened, they would have to always wash the fish thoroughly before using it.

This concept would also apply to frozen fish fillets that are commercially produced. One should however not use frozen (or fresh) fish products from china unless it has a reliable Hashgacha.