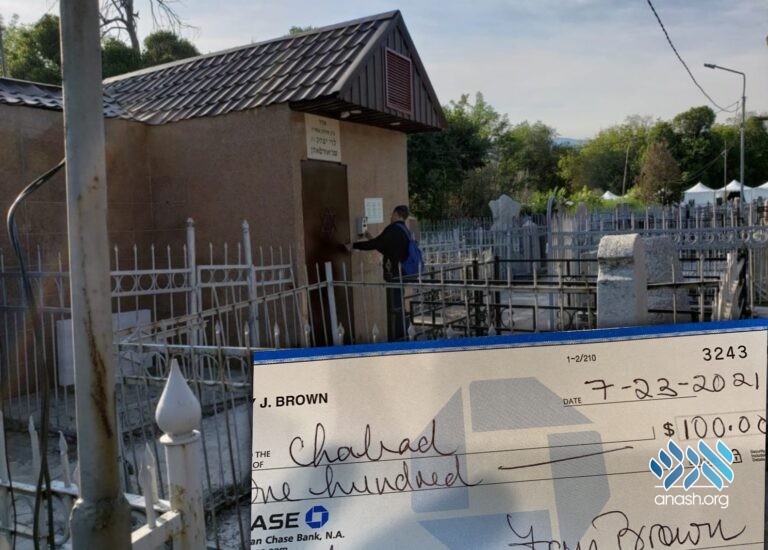 Less than an hour before Shabbos, the Cohen family from Crown Heights received a call from a non-Jewish woman who wanted their home address. When the woman showed up she had a surprising story to tell.

In the past few days, the Jewish community in Kazakhstan led by Head Shliach Yeshaya Cohen, distributed a special booklet on the occasion of the yahrzeit of the Rebbe’s father Harav Levi Yitzchak Schneerson, showcasing all of Chabad’s activities in the country.

One of the addresses listed where to mail a donation was the Cohen family from Crown Heights. Last Friday, a short time before Shabbos began, the phone rang in their house. On the line was a non-Jewish woman who wanted to know their address in order to “come and donate.”

Family members who were not expecting such a surprising phone call, initially feared it was a hoax but agreed to give the woman their address while waiting to hear what the reason was for her doing so.

When she arrived at their house, the woman introduced herself as the housekeeper in the home of the Rebbe and Rebbetzin.

“I saw that it was written that the Lubavitcher Rebbe requested that people give charity in memory of his father, and I wanted to take part in something related to the Rebbe and the Rebbetzin, so this is my contribution,” she said, before leaving a check for $100.

Chabad Houses in Kazakhstan – together with the central Chabad House located near Reb Levi Yitzchok’s tziyun are holding their annual fundraiser.

Donate now generously, and merit an abundance of brochos!