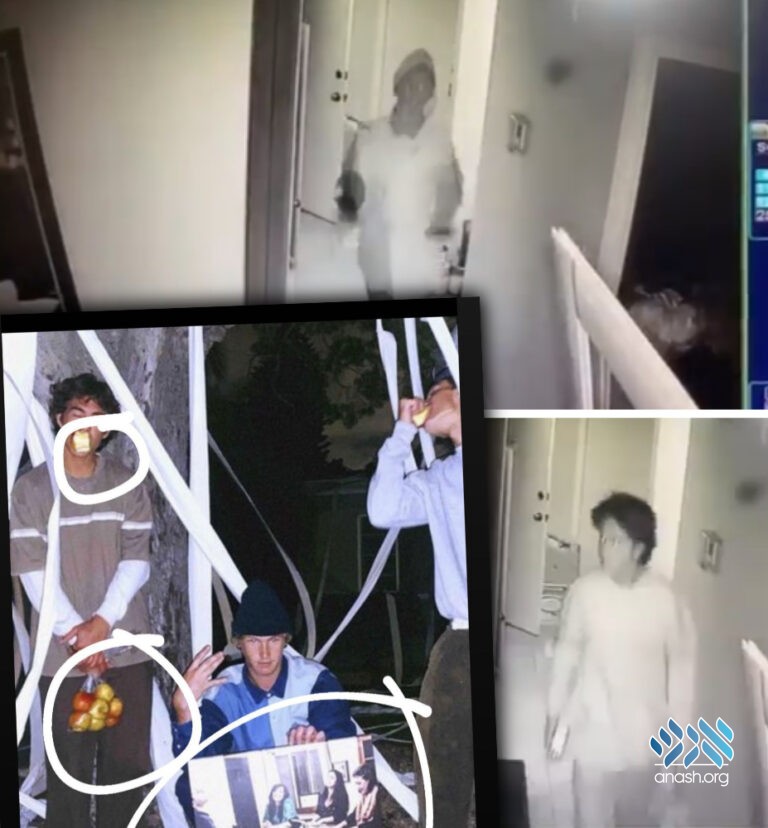 After a group of college students broke into the Chabad House at San Diego State University, shliach Rabbi Chalom Boudjnah tried to find a creative way for them to express regret, without having to turn to the police.

After a group of college students broke into the Chabad House at San Diego State University, shliach Rabbi Chalom Boudjnah tried to find a creative way for them to express regret, without having to turn to the police.

The theft took place last week, when a group of people entered the Chabad House in the middle of the night and stole some food items and a number of pictures of the shliach and his wife, Mairav, together with college students.

“Those items were not necessarily valuable but hold great sentimental and religious value to us and the students at Chabad House,” Rabbi Boudjnah wrote on Facebook..

“With the help of our security team, we quickly distributed video footage to the guys in AEPi and screenshots of the perpetrators to our group of SDSU and in [a] matter of hours we identified their whole group,” he wrote in his post. “Some were locals, college students, others were from out of town. As you can imagine, everyone was very upset. One of them actually posted pictures of themselves bragging about stealing!”

After realizing that their identities were known, the group came back to the Chabad House on Thursday to return the pictures. Rabbi Boudjnah was then faced with the question of whether to press charges against the group.

“I had a choice to make. After the swastikas incident on one of the dorms nearby last month, I could come down hard on them and report them to the university and the police. They would most likely be charged and expelled from school. I decided to hear them out first, so on Friday I met them and they came by and they were scared, and it seemed that they were sorry for their actions,” Rabbi Boudjnah wrote.

The shliach attempted to defuse the situation, telling the students that no charges would be pressed if they wrote a letter of apology and committed to 10 hours of volunteering.

“Well, most of them kept their words and I believe they were sincere and followed up with me on volunteering and an apology letter. One of them just reposted a picture of himself on Instagram taken during the incident,” Rabbi Boudjnah wrote.

Seeing that the students had rejected his chance to make amends, Rabbi Boudjnah decided that the right thing would be to turn to the police.

“I have been in touch with the SDSU police and San Diego State University regarding this person in particular the one posted below. Action will be taken and consequences will be made,” he wrote.

Rabbi Boudjnah wrote that throughout it all, students and the University faculty were very supportive of them.

“I also want to thank SDSU Hillel, AEPI, and most importantly all the students here at SDSU who were very upset by all this and who called, messaged, asking how they could help and really showing so much love and support for the Chabad House. Many expressed how they feel Chabad House is their home and that Mairav and I are like family to them. Your words and support warm our heart and we are so thankful to have you all in our lives,” he wrote.