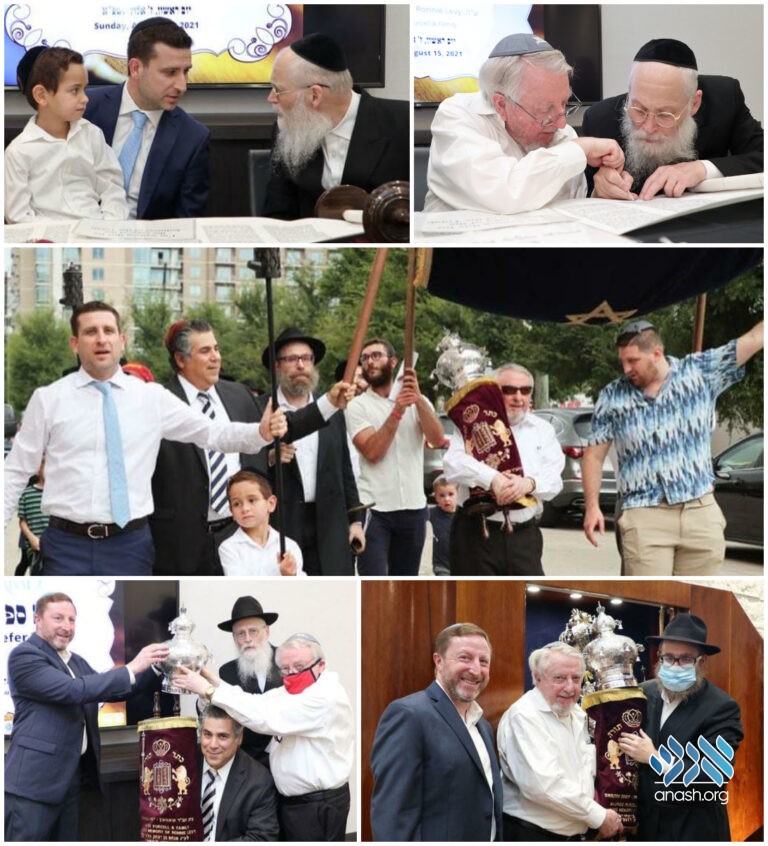 A Siyum and Hachnosas Sefer Torah was held this Sunday at Chabad of Uptown & YJP Houston, but the story behind it began years earlier, with a different Sefer Torah in South Africa.

A Siyum and Hachnosas Sefer Torah was held this Sunday at Chabad of Uptown & YJP Houston, but the story behind it began years earlier, with a different Sefer Torah in South Africa.

In 2013, Maurice Purcell travelled from Houston to visit his hometown of Cape Town, South Africa, and spent some time with his childhood friend Ronnie Levy.

Ronnie was involved in caring for a small, old shul in Cape Town called the Ponevez Shul on Maynard Street. The two friends visited the shul together and discussed the shul’s upkeep and especially the roof which was in serious need of repair.

As Maurice looked around the shul, he noticed that the Aron Kodesh was full of old Sifrei Torah that had collected over the years. “What do you need all these Torahs for?” he asked. “Give me one of the Torahs to take back home to Houston and I’ll fix your roof.”

It was a deal.

The Torah was sent to New York, where the sofer Rabbi Moshe Klein checked it. A missing letter ‘vov‘ was added; the tattered yeri’os were fixed and cleaned until it was good as new, and the refurbished Sefer Torah was welcomed at a Hachnosas Sefer Torah celebration at Chabad of Uptown in Houston, Texas. Ronnie Levy traveled from South Africa to participate in the simcha that he had facilitated.

Back in South Africa, the donation from Maurice to the shul helped renovate the shul to welcome Cape Town Torah High, a dynamic high school started by the local community. The yeshiva invigorated the Shul with life, with dozens of young Yeshiva students davening and learning there every day.

Fast forward a couple of years.

At the start of the pandemic, Maurice and Rabbi Chaim Lazaroff, shliach to Houston, had a conversation about what they could do, spiritually, to end the pandemic. When Maurice heard the now-famous story of the Baal Shem Tov who wrote a Torah to stop a plague, he decided to commission the writing of a Sefer Torah, with a prayer that the pandemic would be over by the time the writing would be completed.

In January 2021, as the Torah was being written, Ronnie sadly passed away from an illness and Maurice decided to dedicate the new Torah to his friend’s memory.

Rabbi Moshe Klein traveled from New York to complete the Sefer Torah and friends and family gathered to celebrate the Siyum and Hachnosas Sefer Torah in Houston at Chabad of Uptown & YJP.

And that is the story of how a vintage Torah from the Cape Town Ponevez Shul came to stand in an Aron Kodesh in Houston alongside it’s contemporary counterpart, both an everlasting testimony to the friendship of two South African Jews who may have lived thousands of miles apart, but were always close at heart.