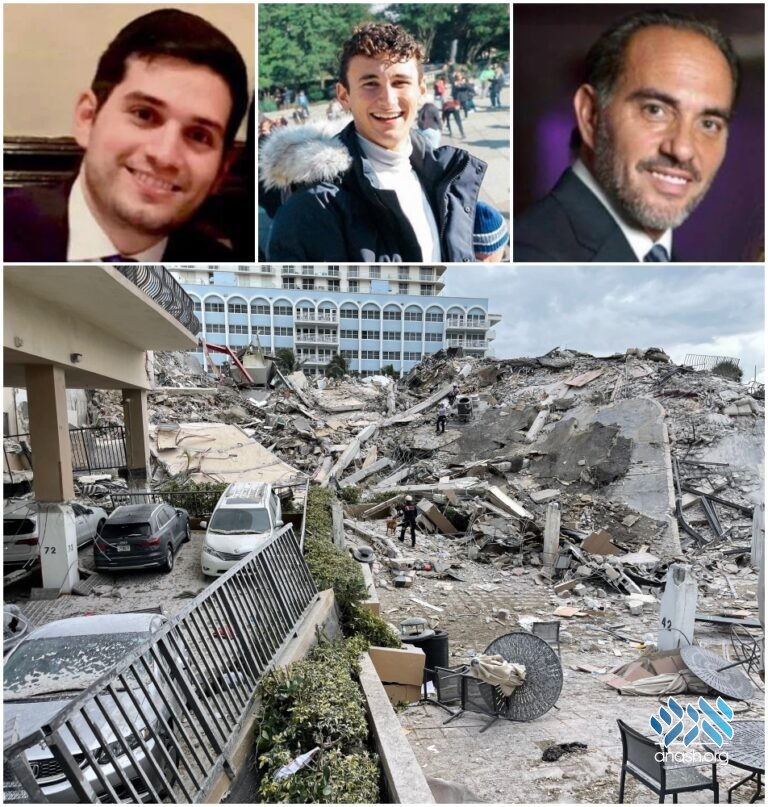 As search and rescue operation efforts continue in the hopes of finding survivors of the collapse, Yidden around the world are continuing to daven and do mitzvos for a miracle. Here are some of the Yidden still missing.

Search and rescue operation efforts continue in the hopes of finding survivors of the collapse early Thursday morning of the Champlain Tower, a 12-story oceanfront condominium in Surfside, Fla., just north of Miami Beach.

Some 150 people remain missing under the rubble of the Champlain Towers. As prayers and good deeds continue on their behalf, here are profiles of some of those still unaccounted for.

Harry Rosenberg, 52, known to his family and friends by his Jewish name, Chaim, is an asset manager originally from Brooklyn and a recent resident of Champlain Tower in Surfside, Fla. He purchased the second-floor condo only last month, hoping that its views of the Atlantic Ocean would help him find solace after a turbulent year that saw the loss of his wife, Anna Rosenberg, to cancer, and both of his parents to COVID-19.

In recent months Chaim had dedicated himself towards launching Mercaz Shalom, a young adult center for mental healing, located in the campus of Mayanei Hayeshua Hospital in Bnei Brak, Israel, in memory of his late wife.

In a conversation recorded in Tablet Magazine with Steve Eisenberg, fellow member of The Shul in Bal Harbour, Chaim said of his move to Florida “I’m so happy to be here, this is my next chapter of happiness.”

Previously, Rosenberg had been renting smaller apartments in the area, but had purchased the larger one in the Champlain to have more room for his children and their families to visit. His daughter, Malki Weisz and her husband, Benny, of Lakewood, N.J., were staying with him at the time of the collapse.

The Weiszes remain missing as well at this time.

Chaim is beloved by those who know him as a truly dedicated friend and family man, someone who “loves everyone and is loved by all.”

“He’s always thinking of others, the type of person who puts their needs before his own, recalls Sendy Liebhard, a friend. “If he sees something and concludes that ‘this is just the thing that so-and-so would appreciate’ it would arrive at the friend’s house in short order.”

Rosenberg had returned from a trip to New York just hours before the tower’s collapse, rushing back to greet Benny and Malki Weisz.

“Chaim is a man of intense faith,” Liebhard says. “Life threw him a lot of curveballs, especially recently. His faith in G‑d and positive outlook is what’s nourished him, and what he taught his family and is keeping them strong right now.”

Benny Weisz, 32, and Malki Weisz, 27, of Lakewood, N.J., had just flown into Surfside, Fla., the night of the Champlain Tower collapse. The couple, married for five years, came to visit Malki’s father, Chaim Rosenberg and spend Shabbat in his new apartment.

Benny, a native of Vienna, Austria, is one of two children born to Dyuri and Tina Weisz. Dyuri, who passed away several years ago, worked at Alvorda Wiener Coffee, a family owned business.

A friend of the family, Chana Weiser, a Chabad-Lubavitch emissary with Chabad of Vienna, says Benny, along with his older brother, Danny, are “very refined people, who really live their Jewish values.”

Shushy Bernholtz, a childhood classmate and life-long friend of Benny describes him as “a diverse person of many talents, with a huge heart.”

“Benny knows everything, he can quote the works of the great German playwrights and poets like Goethe and Schiller and explained the most complex debates in the Talmud with relevant commentaries,“ says Bernholtz

After studying at the Hebron Yeshivah in the Givat Mordechai neighborhood of Jerusalem, where he and Bernholtz were roommates. Weisz went on to study computer science at Kings College in London. After his marriage to Malki, the couple moved to Lakewood, where he works in finance and studies in a local kolel.

Malki works as an auditor at Farmingdale, N.J., branch of the Roth & Co accounting firm.

Shlomo Schorr, a colleague, describes her as someone who and almost regal bearing “who brings an abundance of joy and life into the workplace.”

A Jewish student from the University of Chicago who is also past president of his school’s campus Chabad center is among those missing after a 12-story, 136-unit oceanfront condominium tower partially collapsed early on Thursday morning in Surfside, Fla.

Miami-Dade county police said as many as 99 people who were assumed to be in Champlain Towers South at the time have not yet been found.

Ilan Naibryf and Deborah Berezdivin, were in the building on Wednesday night, and his family posted a message on social media asking if anyone had heard from them. They are among the more than 150 still missing; four people were confirmed dead as of Friday morning.

“Ilan is a fun guy,” said Rabbi Yossi Brackman, director of Rohr Chabad Center at the University of Chicago and Hyde Park. “He’s upbeat, always smiling. He’s very studious; he’s an innovator who is in the middle of making a startup, hardworking and very friendly. He’s an all-round great guy.”

Brackman and his wife, Baila, first learned that Ilan was among the missing from one of his friends, who contacted them on Thursday. They immediately went to work. Baila Brackman reached out to Ilan’s family and to students who make up their community, gathering together with them on Zoom to recite Psalms and pray for Ilan, Deborah and those who remain unaccounted for.

The rabbi continues to speak with students, including many who are reaching out to him for the first time, and trying to offer some comfort during such uncertainty. He has been encouraging them to pray, for men to put on tefillin and for women to light candles for Shabbat.

“This is a particularly challenging time because there’s no definitive resolution,” he said.

Still, Brackman is telling students “to hope … to hold out for a miracle.”

There is a request that Tehillim (Psalms) Chapter 20 and Chapter 119 continue to be said for those unaccounted for. The following names have been received.