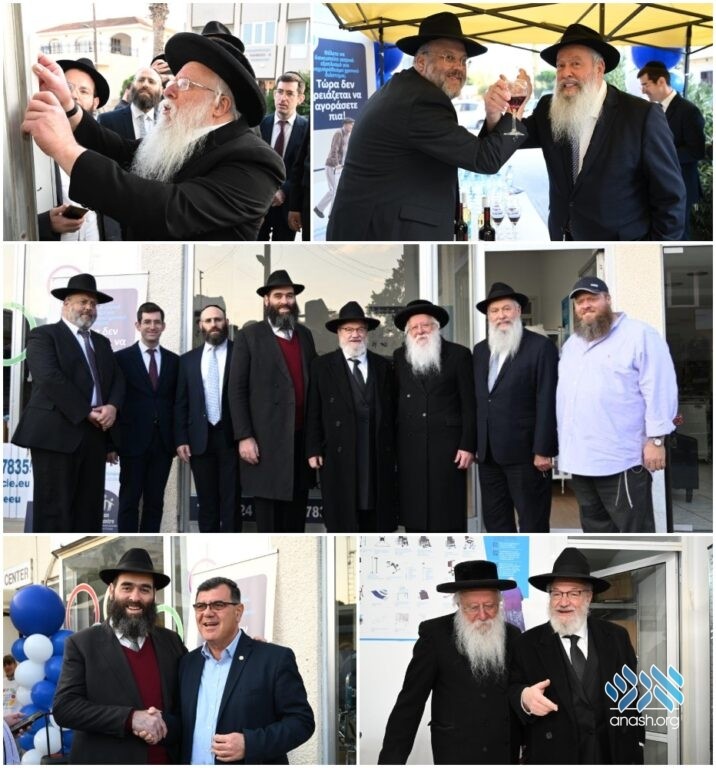 Guests from Eretz Yisroel, leaders of the Rabbinical Centre of Europe, and politicians joined for the dedication of a new Chesed Center in Larnaca, Cyprus, the newest of dozens of such centers established throughout Europe.

The inauguration ceremony of the new Chesed Center supported by the Rabbinical Centre of Europe in Cyprus was held on Jan. 9th in Larnaca. The Chesed Center loans medical equipment and assists with other chesed activities. In the past year, the RCE’s activities focused on the establishment of chesed centers in many countries and cities throughout Europe in both the east and west of the continent.

The Deputy Mayor stated that the relationship with the Rabbis and Jewish communities contributes to the country’s advancement. “Rabbi Raskin’s love of kindness is significant in his extensive activity for the benefit of the needy in the city. The Israeli Deputy Ambassador thanked the RCE for the kindness and the excellent activities and relations between Israel and Cyprus. “This is a landmark of joint good deeds.”

Rabbi Margolin spoke about the RCE activities throughout Europe, and it’s plans for future expansion. He also thanked Rabbi Raskin and the team for all their important work.

The Jewish community in Cyprus are set up in 5 branches, within the main cities in Cyprus: Larnaca, Limassol, Paphos, Nicosia, and Ayia Napa. Chief Rabbi of Cyprus Rabbi Arie Zeev Raskin began working in Cyprus 19 years, during which time he established the Jewish community’s institutions in the country, which include educational institutions for all ages, Mikvahs, synagogues, an array of Torah lessons, and more. The momentum of activity is in full swing and growing all the time, to provide quality Jewish service for all Jews.

Cyprus is home to an estimated 2,000 Jewish families and is visited by about half a million Jews a year. Currently, they are working on the establishment of the Jewish Museum to commemorate the Holocaust and the Ma’apilim.

The RCE CEO, Rabbi Arie Goldberg said: “The opening of these Chesed centers is a huge development in European countries, as the centers provide humanitarian medical aid to thousands of Jews. It is a huge privilege and great sanctification of Hashem that we get to perform Chesed in this way.”

Rabbi Yosef Bainhaker, RCE VP, noted that so far 29 Chesed Centres have been established throughout Europe. According to him, 21 additional Chesed centers will be added in the upcoming year for the well-being and benefit of all the Jewish communities across the continent.